The first view of Lake Atitlan is from just under the ridge where the winding road begins its descent into the valley. We are at 6000 feet in the highlands of western Guatemala, and the contrast of the various shades of green on the mountainsides and the deep, sapphire blue of the lake is quite startling. The lake fills a caldera, a volcanic depression, of enormous proportions which was formed 84,000 years ago. 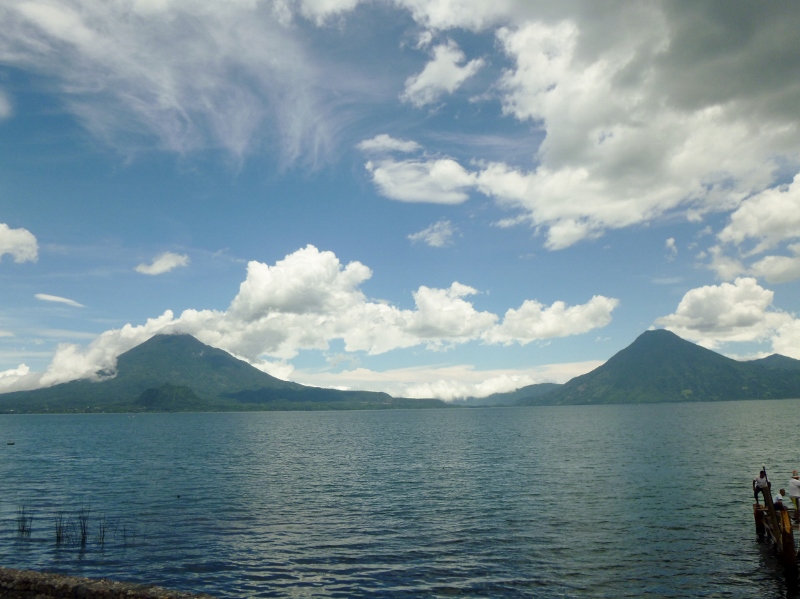 On the southern rim of the lake, three volcanos, Toliman, Atitlan and San Pedro tower over the landscape. It shreds the boundary of picturesque. Aldous Huxley tersely noted, “It really is too much of a good thing.” In this, he was correct.

Panajachel, the town where we are staying, is similar to the other seven or eight villages spread around the lake; a few thousand people engaged in traditional crafts and tourism with the remainder in ancillary businesses or farming and fishing. However, Panajachel is unique. It is built on the ancient flood plain of the Rio Panajachel, which still feeds Lake Atitlan, and as a consequence it is built on the level.

The remaining villages are built on the sides of the caldera and they are a vertical maze of streets, homes and shops. While people have lived around the lake since the pre-Classic era, the lake has flooded five times in recorded history. The latest iterations of Panajachel, San Marcos La Laguna, Santiago Atitlan and most of the towns date from the 1930’s.

We set out one morning to visit some of the lake towns by boat, the easiest means of transport. San Juan La Laguna, a very small village on the eastern shore of Atitlan, is an artisan’s town with over 40 cooperatives, primarily women’ s “asociaciones”, devoted to the production and marketing of traditional native crafts. While the focus is primarily on weaving, other co-ops engage in wood working, pottery and painting. 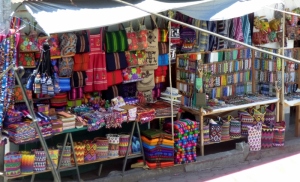 The quality and beauty of some of the woven pieces produced was truly phenomenal. The gradation of colors in the thread was enormous and all the dyes were produced by hand from organic materials: plants, minerals and insects.( At times the tyranny of a single suitcase seems unjust. That day was one of those times as we both were so tempted to make a purchase). 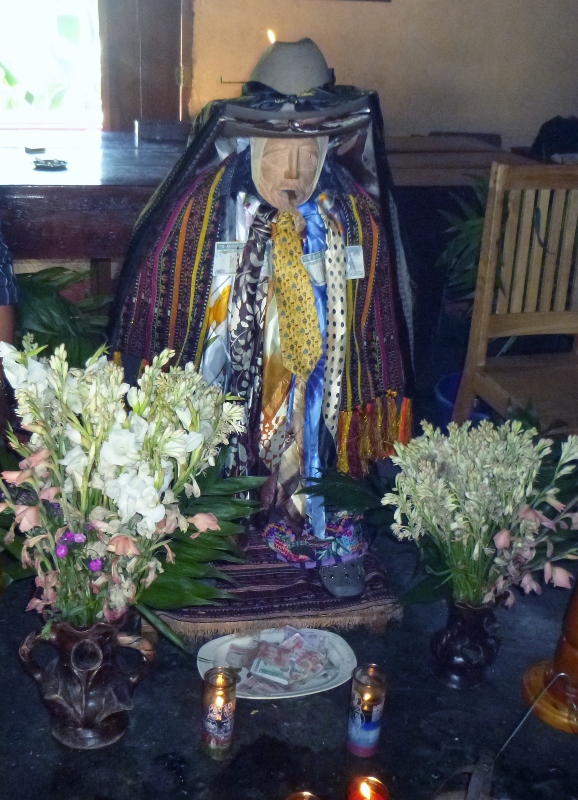 The highlight of Santiago Atitlan was the shrine of Maximón, a folk saint venerated in various forms by the Mayan people of several towns in the highlands. One of the legends holds that one day, while the men were away working, Maximón came to the village and slept with all the wives. When the men returned they were sorely aggrieved and cut off his arms and legs. And that is why the effigies you see of Maximón at the shrines are of short men often without arms. The worship of Maximón treats him not so much as a benevolent deity but rather as a bully whom one does not want to anger. His expensive tastes in alcohol and cigarettes indicate that he is a sinful human character, very different from the ascetic ideals of Christian sainthood. Devotees believe that prayers for revenge, or success at the expense of others, are likely to be granted. The veneration of Maximón is not approved by the Roman Catholic Church – geez, go figure…