The Man In Black: Sandino Watches Over Managua

Posted on November 2, 2013 by Anita @ No Particular Place To Go 4 comments 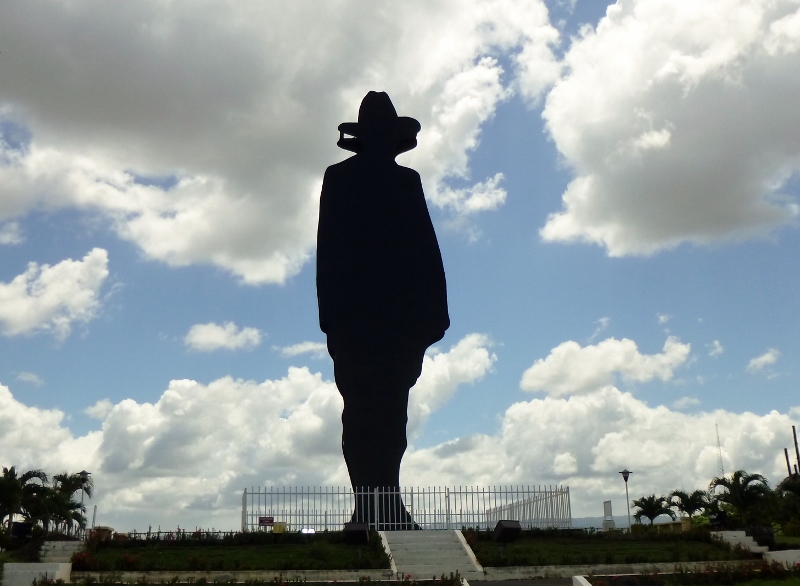 The silhouette dominated the sky line as we rounded a corner coming into Managua, Nicaragua, the capital. It was the iconic shadowed contour of Augusto C. Sandino, a Nicaraguan general, revolutionary and leader of the rebellion between 1927 and 1933 against the U.S. military occupation of Nicaragua. He was referred to as a “bandit” by the United States government but his exploits made him a national hero (even to this day) throughout much of Latin America. He was assassinated in 1934 following the withdrawal of American troops . This particular statue was located in the Parque Nacional Historico on the hills overlooking the city and Lake Managua along with Loma de Tiscopa, the notorious prison of torture and murder for rebels and political prisoners used by the Somoza family dictatorship until the 1979 revolution. 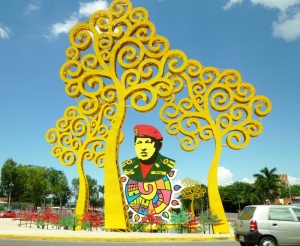 From the heights of Managua, the yellow sculptured trees can be seen that were dedicated in July, 2013, to commemorate the 59th birthday of Hugo Chavez, the late Venezuelan President.  The imaginative trees were a gift from his ally, President Daniel Ortega (whose name might be familiar to those watching the U.S. news in the 1980’s during the Iran-Contra affair).  These rather whimsical structures lining the Avenida Bolivar did not quite mesh with the stern visage of Hugo, especially when mounted on his psychedelic base. Nearer the malecon (walkway along the lake) these trees were paired with the silhouette of Augusto Sandino, but this time in bright yellow. 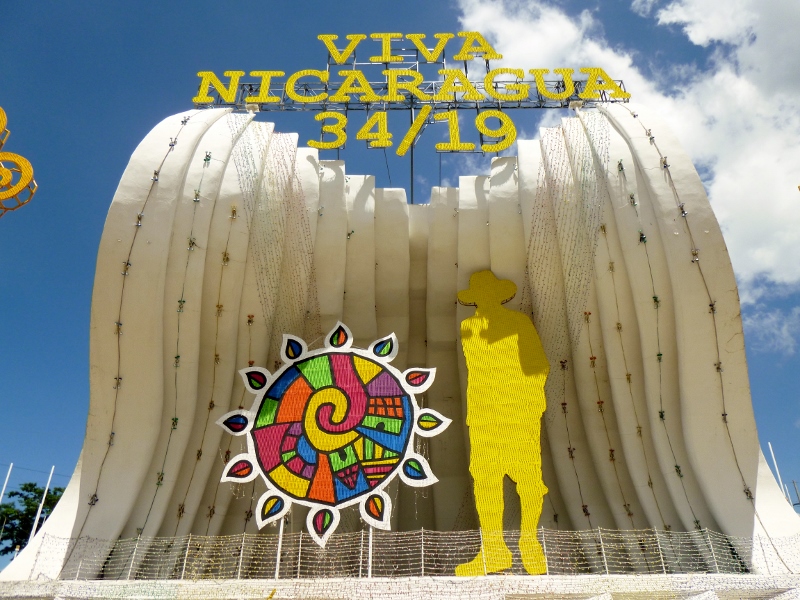 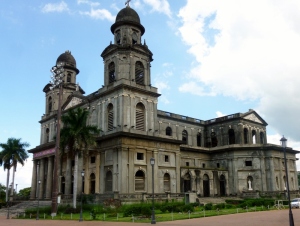 However, revolutionary zeal was not all that was on display in Managua. We also visited the old and new cathedrals. The old colonial Catedral was destroyed by a massive earthquake in 1972, along with much of the old city center, which killed an estimated 5,000 residents, injured 20,000 and left 250,000 people homeless. It alone of all the ruins remains, adjacent to the Palacio Nacional de Cultura, the national cultural museum. The interior of the church is now empty and unused; a church without a heart in a city without a center.

We also visited the new cathedral, the Catedral Metropolitana, constructed in 1993, which is completely unique when compared to the more traditional, heavily decorated architecture  of Latin American cathedrals. The sixty-three cupolas (resembling egg cartons or breasts depending on one’s point of view) signify the country’s sixty-three Catholic cathedrals.

The interior might be described as austere and industrial yet the lighting from the cupolas and the sparse use of paint and decoration makes the interior quietly inviting and respectfully humble.

Our day ended with a tour of the National Cultural Museum. Despite some very interesting displays, the visit got off to a tenuous start when our guide informed us that the fee for taking pictures was an additional $80 Cordobas, on top of the ex-pat fee of $80 Cordobas per person. We declined the fee and politely advised the guide that we would be fine by ourselves. Giovanni, our driver, huddled with the museum guide and returned to explain that there was a misunderstanding: there was no fee for photographs and the guide’s services were required as we were allotted a thirty minute viewing tour of the museum. So, with our docent in place, we took a rather rushed tour of the facility. Despite the uninspiring ending to the day, we were impressed with the beauty and cleanliness of Managua and the overall friendliness of the people that we met.