Posted on December 7, 2013 by Anita @ No Particular Place To Go 3 comments

Big Corn Island, just a smidgen off the gringo trail, is a conundrum. It has more than three times the land mass of its sister, Little Corn Island. It has five times the population (approximately 6500 versus 1200); it has the only airport and pier for transporting goods, services and tourists from the mainland. It even has the higher land form; Pleasant Hill (371 feet) as opposed to the stunted Lookout Point (125 feet). Yet a full 75% of the tourists who arrive on Big Corn Island depart almost immediately for Little Corn Island. The larger ferries even coordinate their departure times to coincide with the arrival of the twice daily La Costena Air flights from Managua to facilitate this exodus.

One result of this out-flux of tourists is that the service industry, which only tentatively began in the 1970’s and was stunted by the government’s disregard for the area until recently, is still in its infancy. This fact became obvious later when we realized that the largest hotel on the island boasted only twenty – count em’, twenty – cabanas. Little Corn has done a much better job of recruiting the tourist dollar with the hostels and hotels, SCUBA, snorkeling and sport fishing segments.  Tourism plays a small part in Big Corn’s economy with fishing –  shrimp, lobster and a variety of commercial fish – as the major economic engine of the island. 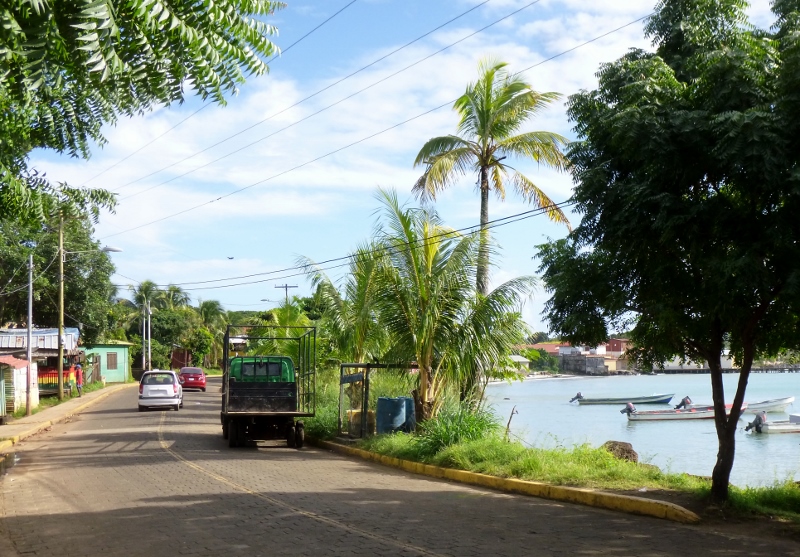 This reality was impressed upon us immediately when we went to pick up a few groceries in the late afternoon following our arrival on the island. Our host, Don, had advised us to go to the Commissary and the vegetable stand nearby to purchase some basic provisions for meals.  Once in the Commissary we observed dismally that half of the shelves were filled with cleaning supplies, paper goods, toiletries and the other half a random collection of canned and packaged foods.  To our questions of “Do you have any ground coffee, eggs, and butter the answer was an unapologetic “No, not today”.  The coffee was instant, the cheese American Singles, the bread a few odds and ends of older rolls and pastries.  We walked out with a small bag of oatmeal, pasta, some salad dressing (in the hopeful event that we’d find lettuce or vegetables) and a can of tuna.  No beans; none, not red beans, not black beans, not refried beans, not even bulk beans!  If possible, the vegetable shop a few buildings down was even less promising:  meager sunlight filtered through spaces in the roof to dimly illuminate boxes of limp, bruised, overripe and moldy offerings that we sifted through hoping that some strange insect wasn’t hiding in the box along with the food.  We arrived back at our abode dejectedly wondering just what we were going to do for grits for the next month.

Fortunately, Helen, the cook and housekeeper for our hosts, escorted us around the island the following morning. We went to Melody’s, a store with no outside advertisement for the uninitiated visitor, which had a fairly large assortment of groceries. Helen then showed us the Wharf Store, across the street from the municipal wharf, which was best stocked on Friday and Saturday after the ferry arrived with fresh provisions. 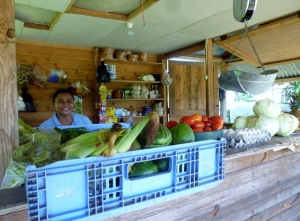 She showed us a restaurant where we could purchase freshly made tortillas. And we subsequently discovered other little tiendas where we could find foods that worked into our daily diet. It turned out that shopping was not all that complex, it just took some social interaction, a few stops and a bit of south of the border patience.