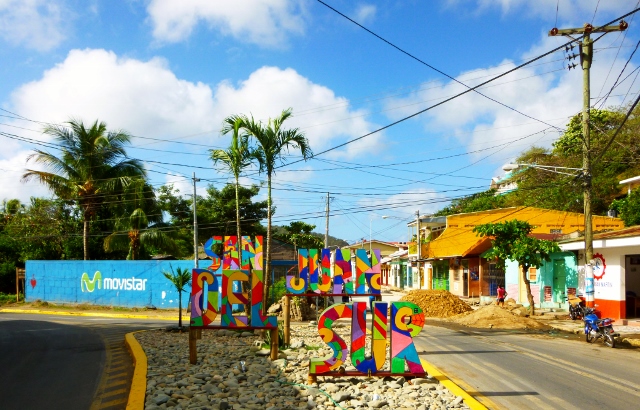 Coming into the beach town of San Juan del Sur we were greeted by a vibrant psychedelic sign that announced that, yes indeed, we had arrived at our destination on the Pacific coast. 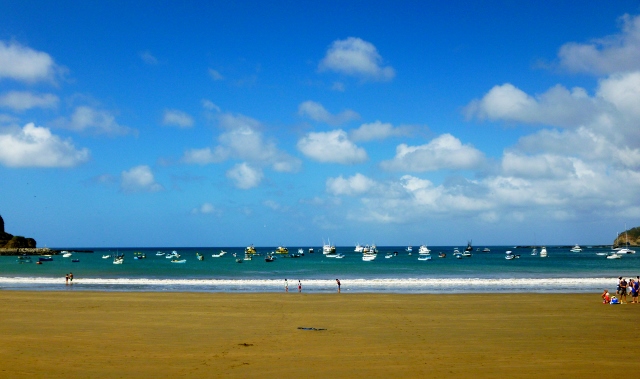 The half-moon bay was ringed by golden sands and had sailboats, pleasure boats and local fishing vessels scattered across its surface.

The statue of Christ of the Mercy, the second largest statue of Jesus in the world, presided over the bay from the towering cliffs at the north end benignly gazing down upon the water and blessing the fishermen.  The street was lined from one end to the other with restaurants, bars and hotels.  It was easy to see that the once peaceful fishing town, now consisting of roughly 18,000 residents, had become a popular vacation place attracting both Nicaraguan vacationers and foreign tourists.  This beach was a beautiful place for those who wanted to walk along the shore, swim or splash in the waves and just chill. Other beaches to the north and south offer surfing and lessons for those so inclined.

Over the last few years the picturesque and colorful town has begun to attract a fair-sized expat and foreign retirement community who came to visit and decided to stay for the laid-back beach vibe, low-cost of living and gorgeous scenery.  Entrepreneurs are building small retirement developments and condos, owning and operating surf shops, fishing tours, restaurants and hotels.

Expats are always a varied lot and one eccentric resident immediately caught our attention as we were walking down the street.

Dressed entirely in a leopard print ensemble complete with a flapped hat and matching scooter the deeply tanned, shoe-leather-skinned woman was walking two golden-haired spider monkeys.  We asked her if we could take a picture of the monkeys (but really she was the prize!) and for a charge of 20 Cordoba which she justified as food money for her companions, she allowed us to take a few photos.  When asked about the monkeys she explained  that they were “rescue monkeys” saved after their mother had been shot and killed.

One afternoon during our visit we climbed into the back of a pick-up and took seats upon the benches lining the cargo bed. The boards of the surfing students were strapped on the top rack. We, sans boards, brought water, sun screen and our anticipation of a lovely afternoon and headed for Playa Hermosa, a secluded beach a few kilometers south of town. After driving a short distance we turned off the highway and passed, for a fee, through a locked gate and down a rocky, rutted, shaded and densely forested road, which was scraped into the hillsides that led to the beach. It was easy to imagine that during a downpour it could become a quagmire of mud.  This hard-scrabble track had been punched in by the developers of the hit television series Survivor a few years earlier. There was a comfortable little camp at the end of the road equipped with a restaurant, hostel and several palapas. We had arrived at a backpacker destination and the hard-bodies, beer and rum were all on display in relaxed and convivial abundance. Even the fact that one of our party stepped on a small stingray and received a nasty sting did not dampen the mood the afternoon.

Back in San Juan del Sur, while talking with a couple of expats who are financially involved in the community, there seemed to be an agreement that this small village was quite likely on a trajectory that would take it to a level of development similar to Jaco, Costa Rica. The pronouncement was neither laudatory nor derogatory, it was simply the educated guess of two longer term residents who had watched development in other Latin American countries. Change is a constant and the haunts of the backpackers do not remain their exclusive domain for long. This retreat is fast becoming a fixture on the gringo trail as word of this sea-side paradise spreads.