Life Is Like A Box Of Chocolates: El Museo de Choco

Posted on February 22, 2014 by Anita and Richard @ No Particular Place To Go 4 comments

We’ve passed by Granada’s El Museo de Choco, the Museum of Chocolate, many times but on the day that celebrates all things chocolate, Valentine’s Day, we finally stepped in.  It was a very hot day so we chose their signature drink, iced chocolate, an amazingly refreshing and satisfying concoction. A few days later we joined a group of five other devotees in a class, “From Bean to Bar” which was designed to teach the rudiments of the making of chocolate.

The class also presented a better understanding of the role of the cacao (pronounced ca COW) tree within the broader context of history. We learned, for example, that the cacao tree was indigenous to the Mayan homeland and that it was grown in most family garden plots. So, unlike the Aztecs who reserved the chocolate exclusively for their royalty, all Mayans, from the nobility to the lowest classes could enjoy the fruits of the cacao tree. The Mayans preferred it as a hot, frothy drink flavored with honey and chili peppers.

The  fermented cacao beans, which grow from twenty to sixty per pod, were roasted over a low fire in an ironwood cauldron for roughly fifteen minutes.  As the day’s temperature was ninety-plus degrees it was hot and sweaty work to stir the beans over the fire, but with a bit of song and dance by all participants, it played out well.

We then winnowed the beans, cracking the husks, picking out the nut meat and placing the small pile into a basket. Next, we crushed the nibs using a stone mortar and pestle to make the paste necessary to produce the cacao butter for the sweet drink.

Finally, we were ready to create our libations: First, the frothy Mayan drink and then the Aztecan brew, traditionally flavored with honey, vanilla beans and black pepper.  The Spanish version, which the conquistadors were quick to expropriate, incorporated sugar milled from imported sugar cane and milk from their transplanted cow herds along with cinnamon and other spices. 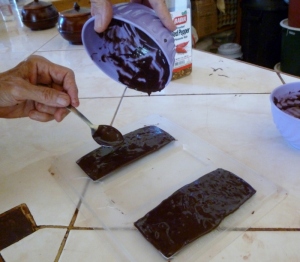 We finished up our tour by making our individual candy bars; one bar combined the chocolate with honey and chili peppers and the other bar was mixed with honey, almonds and cinnamon.  At the end of the class we toasted each other with another glass of iced chocolate drink (no dinner necessary after that!).

The world has moved forward tremendously since the days of the Mayans, Aztecs and Spaniards. Cacao is still grown in Central America and since it is indigenous to the land, tends to have the highest quality and can be produced organically. However, the demand world-wide is simply too great. Vast monoculture plantations are found in Africa, Indonesia and elsewhere to supply the sweet tooth, particularly in the developed world. The upshot is that the sun farms, far removed from the rain forest of Central America, are vast acreages which require herbicides, pesticides and fertilizers and eliminate habitat diversification for animal species and crop diversification for the worker’s economic protection.

Cacao production has, for better or worse, joined the ranks of the commodities of modern world.