There was no breeze and the town felt almost deserted in the mid-afternoon sun as we entered Cahuita for the first time after a forty minute walk down a dirt road from El Jardin Glorioso where we were staying.

At the northern end of the main street was the first grocery store named, incongruously, the Safari, and about three short blocks away and anchoring the other end was the second grocery store, the Vaz #2.  Cahuita National Park sat at the southern edge of the town. Two additional streets in Cahuita pointed west; they linked up near the bus station on the road out of town.

Cahuita is a funky little Caribbean beach town where the days play out slowly and there just isn’t a lot to get excited about.  It’s a laid-back place for the traveler who wants to enjoy the mix of rugged coral, black and golden sand beaches and hike through the rainforests rather than party the night away.

The name is derived from an indigenous word Cawi for the towering, twisted Sangrillo trees that, along with mango, palms and a variety of other trees, comprise the coastal forest.  The town’s origins can be tracked back to Africans who were brought via Jamaica in the late 1800’s to build the coffee railroad from San Jose and work the banana plantations. The Afro-Caribbean culture is still in evidence among the local population and a jumble of Caribbean patois, English and Spanish seems to be the language of communication.

After a few long walks into town to buy groceries or sample the restaurants we followed our hosts advice and rented bicycles for 5,000 Colones ($10) a day; big clunky, graceless, single-speed contraptions with sluggish coaster brakes.  These sped us on our way with less effort along the dirt roads and we explored the national park and the town and its environs at our leisure (as everything seems to be done in this humid, tropical area).

Cahuita National Park was established in 1970 and is Costa Rica’s only free national park. It’s small land mass, 2600 acres, was established to protect the large coral reef off the Caribbean coast which is still endangered. 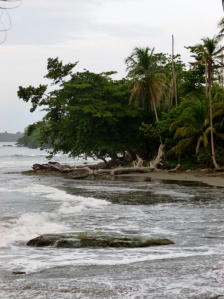 We donated towards the park’s maintenance, chained our bikes and walked for a few hours along its trails, beaches and occasionally upon long, wooden, raised footpaths elevated above swampy ground.  The sun overhead was filtered by the coastal forest canopy, the air humid and the atmosphere quiet and tranquil, broken occasionally by some insect buzzing or a birdsong.

Our hike was gratifying although we had hoped to glimpse either the two or three-toed sloths or a troop of capuchin monkeys inhabiting the park.  Our efforts however rewarded us with the sighting of a lone howler monkey high in the trees and a couple of raccoons ambling across the path.  And, thankfully, no pit vipers were spotted either since they also occupy the park. 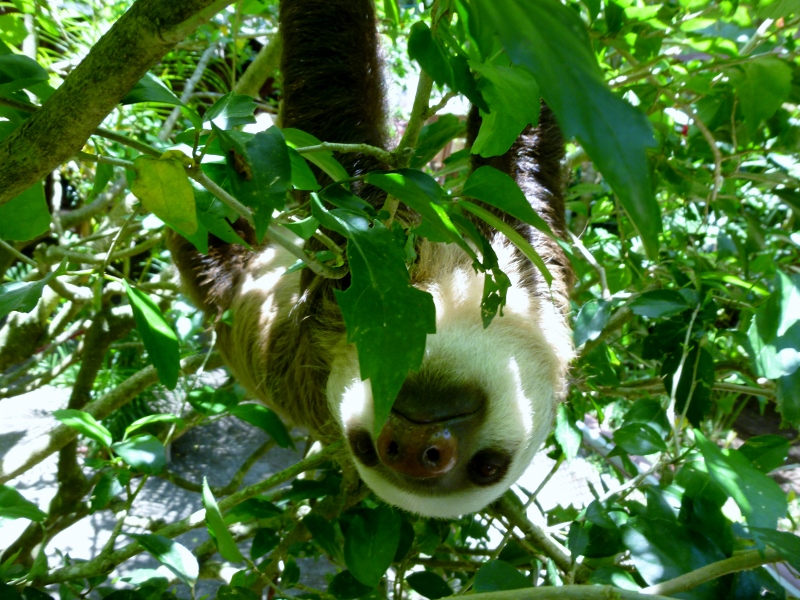 Since we had no luck spotting the sloths in the park we hopped a bus to the nearby town of Puerto Viejo and visited the Jaguar Rescue Center, a sanctuary that protects injured animals and returns them to the wild whenever possible.  And, finally, we saw sloths, both two and three-toed, high in the trees adjoining the property (so we can truthfully say we saw them in the wild) and climbing sideways along branches or hanging upside down inside the sanctuary.

We saw several varieties of frogs alongside a cleverly landscaped natural-looking lagoon including one so cleverly camouflaged that it nearly defied the focus on our camera. In several sturdy

cages were species of the poisonous snakes including the fer-de-lance and the golden eyelash pit viper.  There was a half-blinded anteater that had been rescued and (so cool!) four small baby anteaters and a few baby howler monkeys.  Although we’re not zoo fans the Jaguar Rescue Center was a unique, educational and uplifting experience that we really enjoyed. 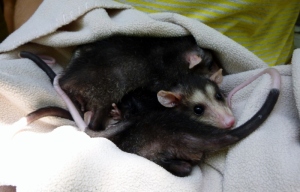 In retrospect we’ll still stand by our statement that there’s not a lot to get excited about in Cahuita; that’s different from not a lot to do. You just don’t get too animated – that can be hard work in the hot tropical sun, don’t you know.