Do You Know The Way To San Jose? 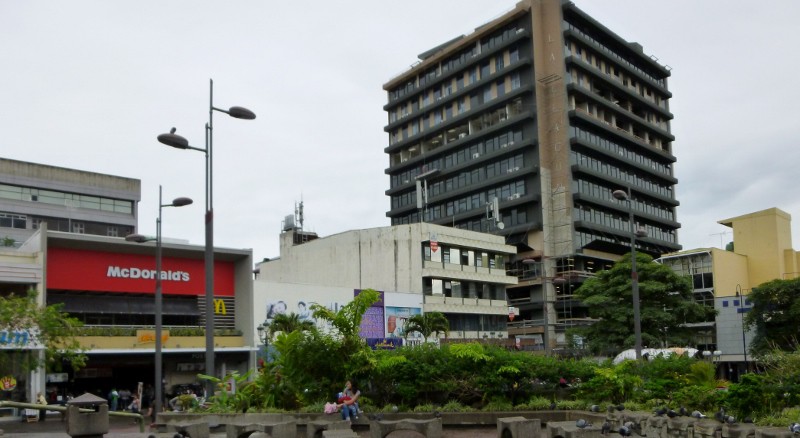 The capital city of Costa Rica, San José, gets very little press in the guidebooks and, like most travelers, we had used the city as a place mainly to get from here to there as it is located in the center of the country.   This was our fifth trip to the city and, aside from the Tica Bus station and some quick food restaurants around our hotel, we didn’t know doodley about the capital except that it was big and hectic with traffic and pedestrians scurrying about.  Like all of our previous visits the weather was chill and gloomy; gray, overcast and frequently raining regardless of whether the rest of the nation was in the wet or the dry season.   However, unexpectedly, we found ourselves with a full day to see a bit of the city as our bus for Panama City did not leave until midnight of the following day.

We did know a good deal about our lodging as, despite our travels, we can be creatures of habit and kept returning to a charming little hotel we had discovered during our first visit. The Rosa del Paseo is housed in a turn-of-the-century Victorian private home and was built 115 years ago by the Montealgre family who made their fortune exporting coffee.

It is reputed to be one of San José’s most charming stucco homes and is located near the heart of the city on Paseo Colón. The Rosa has kept pace with the times, undergoing regular upkeep and upgrades yet is nevertheless surprisingly evocative of 19th-century Costa Rica. 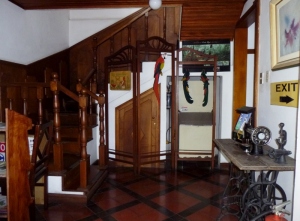 It has the traditional central courtyard and is graced with period furniture and oil paintings. Beautiful details are spread throughout the hotel, including transoms, ornate stucco door frames, original tile floors, polished hardwood and parquet floors, gleaming wainscoting and a collection of antique sewing machines on original tables scattered here and there.  In the midst of the frenetic movement of the modern capital city of San José, the Rosa del Paseo retains its dignity and composure.

The Ticos with whom we had spoken had highly endorsed both the Museo de Oro (Gold Museum) and the Museo de Jade.  Our map was a bit sketchy as to the exact location of the museums so we opted for the most obvious solution and hailed a cab to the Plaza del Cultura.

And there, residing below the Teatro Nacional (National Theater) was our goal. But to get to the museum we needed to navigate our way through a plaza full of pigeons which refused to be flustered by our passing. Indeed, they moved leisurely out of our way delaying just long enough to make certain we were not bearing gifts of food. 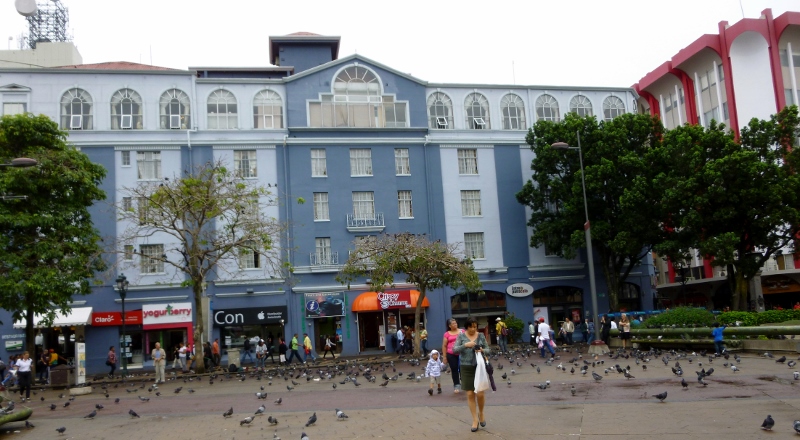 The gold museum contained an amazing assemblage of Pre-Columbian gold pieces ranging from raptor broaches and clasps to warrior breast plates and collars and included numerous animal figurines for ceremonial use.

Maybe subconsciously we’d assumed that, after the depredations of the Spanish and the centuries of interminable grave-robbing and looting, the pieces remaining would not be so numerous or would be of lesser quality. Fortunately we were proven wrong and we were astonished and impressed by the quantity and wealth of treasures assembled in one place.

Coming back into daylight brought us to the National Theater, a magnificent building that is a monument by, for and to the 19th century coffee barons.

The theater was modeled after and imitative of only the best of European architecture and was built with European marble, windows and chandeliers and decorated with European paintings, silks, brocades and crystals. The barons lobbied the government agreeing to assist financially in its construction but, in the end, 94% of the costs were raised by a general tax overwhelmingly borne by the common population, the non-coffee barons.  And, without a doubt, the masses might have appreciated the century old Steinway and Sons baby grand piano which the maestro graciously limbered up for our enjoyment.

As the afternoon waned, we hoofed it a few blocks over to the Jade Museum, a five-story building of modern design tastefully filled with a wealth of multi-colored jade objet d’ art.  Again we marveled that this quantity of masterful work had survived the last centuries of pillage and plunder. We were well pleased with the museum even before we encountered the overwhelming and astounding

collection of ceramics, a massive number of pottery pieces in pristine condition. Tucked away on the fourth floor was an unexpectedly large exhibition of ceramics and sculptures of Pre-Columbian indigenous erotica  which displayed an avid interest in sex, sexual roles and childbirth.  Our close examination was interrupted by the announced closure of the museum which led to our hurriedly breezing through the remaining floor before exiting into the tumult of the city and ending our cultural expedition.

We can’t say that we are a great deal wiser about San José but we learned that beneath the exterior of hurried consumerism and anonymous architecture there are true jewels to be found. The beauty contained in the museums and National Theater made us glad that we had spent a little more time exploring San José.