Some Sun, More Rain and the Journey to Bocas Del Toro

Posted on August 9, 2014 by Anita and Richard @ No Particular Place To Go 35 comments

Leaving David in the early morning we were off for the Caribbean coast to see the reputed number one tourist area of Panama – Bocas del Toro.  The day was bright and hot, promising to be another scorcher.  Feeling a little less confident about our navigating skills and, again, embarrassed at our fractured Spanish, it had taken us two circuits bumbling around the large and confusingly chaotic, triangular-shaped bus terminal of David before we found the boarding area for the bus bound for Chinguanola that would send us on our way .  The bus was a twenty-four seat vehicle, a mid-size in the world of Panamanian buses, and it left David far from full, departing the terminal with only seven passengers.   We headed east down the Pan-American highway which was under construction; a perpetual condition here in Panama we had been told.

We left the Pan-Am near Chiriqui and began the slow ascent towards the continental divide on our way to the archipelago of Bocas del Toro and Bocas Town on Isla Colon. As we climbed towards the summit the air cooled and it began to mist; wispy, feathery clouds crept out of the valleys and clung forlornly to the ridgelines. Peering down into the valleys revealed a fractured and folded terrain for Panama is a new land. Somewhere around four million years ago, an eye blink in geologic time, massive tectonic plates ground together and this magical landscape up-lifted and created the land bridge between the northern and southern continents.

Just past El Valle de la Mina, near the summit of the continental range, the distinction between the sky and the road began to disintegrate rapidly. The white-greyness of the air merged with the grey-whiteness of the undelineated concrete highway and the misty rain played havoc with depth perception and object identification. The bus crept and climbed slowly along the dizzying curves of the winding road as the windows streamed with moisture.

As we descended from the summit and made our way to the coastal area, the visibility improved somewhat although it had begun to rain steadily and with great purpose.  The bus stopped repeatedly, filled to standing room only and emptied and filled and emptied again, with chattering,neatly dressed, uniformed children finished with another day of school.  The sky cleared briefly and the sweltering heat enveloped the land only to be replaced again by more heavy rain as the thunderheads moved in off the Caribbean. 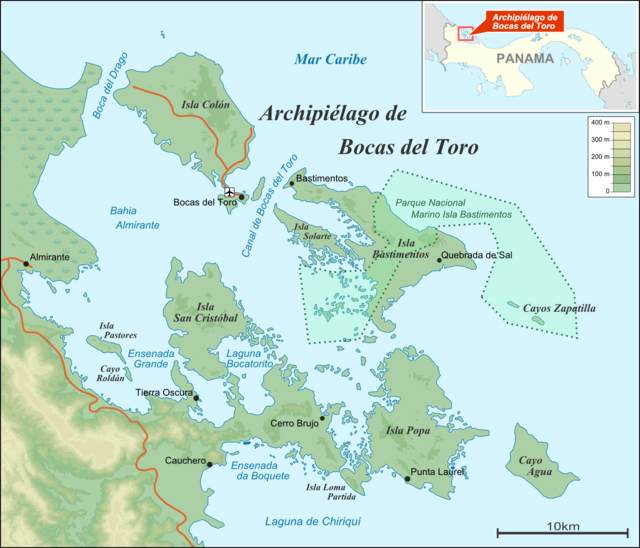 Almirante, the jumping off point for the water taxi to the Bocas del Toro archipelago and Bocas town, may have seen better days or perhaps it was always neglected and dirty. We grabbed a cab from in front of the dilapidated bus stop but the scenery only deteriorated further when we arrived at the waterfront where outhouses perched at the ends of docks extending out from ramshackle homes.

After purchasing our tickets for the water taxi we wrapped our backpacks in waterproof covers to protect our laptops from the rain and hunched protectively over the packs in our laps (rather resembling gargoyles at this point) as we hunkered down in the launch. Rain dripped down the sides of the canvas tarp overhead and splashed into the boat from the sides as the water taxi gained speed and we endured the half hour ride to the island.

And, you ask, was Bocas del Toro worth the time and effort?  We might have to rethink scheduling any future visits during the rainy season, which according to one local, was one of the wettest years he could remember.  However, most afternoons we could count on the sun making an appearance and a few hours of no rain so that we could explore around the colorful Bocas Town and the Isla Colon. We managed a day trip on a catamaran sailing to Isla de San Cristobal and Isla Carenero among numerous little islands. 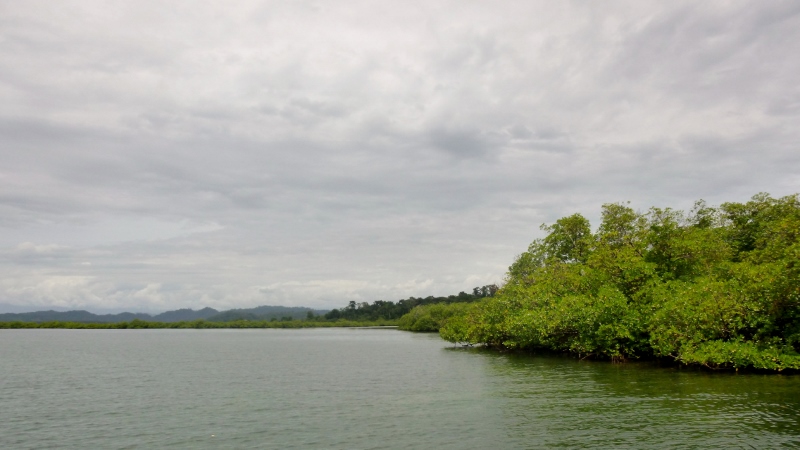 We anchored a couple of times to swim and snorkel alongside a shore tangled with mangroves above a fantastical reef which included  startling deep purple and brilliantly golden coral and other fabulously shaped and colored occupants.  An amazing number of plumped up, rosy-colored starfish, resembling pictures from a children’s book, rested on the sand or draped over the coral inhabitants in the reef garden.  Another day we unfurled umbrellas and spent a few hours following an energetic English expat as she showed us her incredible botanical garden paradise, Finca del Monos,  spread over 27 acres. 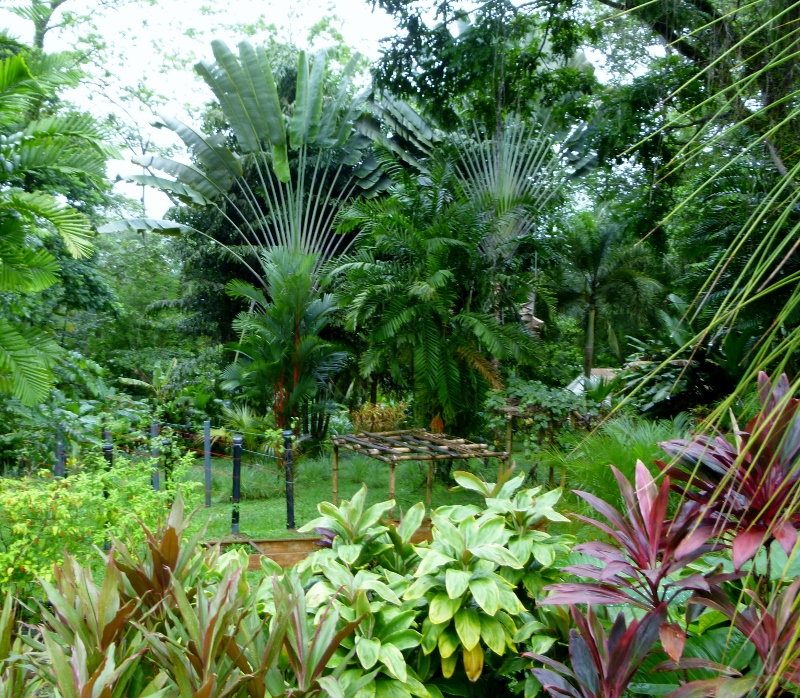 So yes, our journey was well worth the time and effort and we were supremely comfortable and well cared for at Lula’s B and B.  And hey, we’re not vacationers counting each precious day, despairingly waiting for sunshine and cursing the rain.  We can be patient and enjoy the thunderstorms and downpours.  We have time …