Déjà Vu at the Tarqui Market

Posted on October 18, 2014 by Anita and Richard @ No Particular Place To Go 36 comments

“It’s like déjà vu all over again.”  The quote, often attributed to Yogi Berra, is the feeling we have as we wander through the vast market area known simply as Tarqui in Manta, Ecuador. It is, in ways, similar to the sprawling mass of shops and stalls in Merida, Mexico whose cacophony and turbulence would drive us back to Parque Central after a couple of hours. Or it could be compared to the Mercado adjacent to the gigantic, bus parking lot, masquerading as a terminal, in Antiqua, Guatemala. Here we could find, among the fruits and vegetables and almost all manner of things available in that country, the area known as la Paca (the Bale) which resembled nothing so much as a vast topsey- turvey Goodwill drop-off station turned on its head. But, Tarqui is unique. 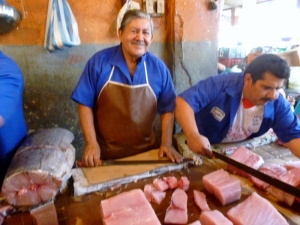 A reputable source guestimates that Tarqui is a rectangularly shaped twelve by fifteen blocks. While we’ve not walked the parameter that seems intuitively correct. Tarqui serves as a market for the barrio, the neighborhoods surrounding it, as well as the city folk. The street stalls offer to the passing throngs the bounty of this fecund province of Manabi in addition to the abundance of seafood from the Pacific. For the haggling aficionado, bargain hunters get an animated buying experience with plenty of smiles and shoulder shrugs as well as, in most instances, the cheapest prices in town. 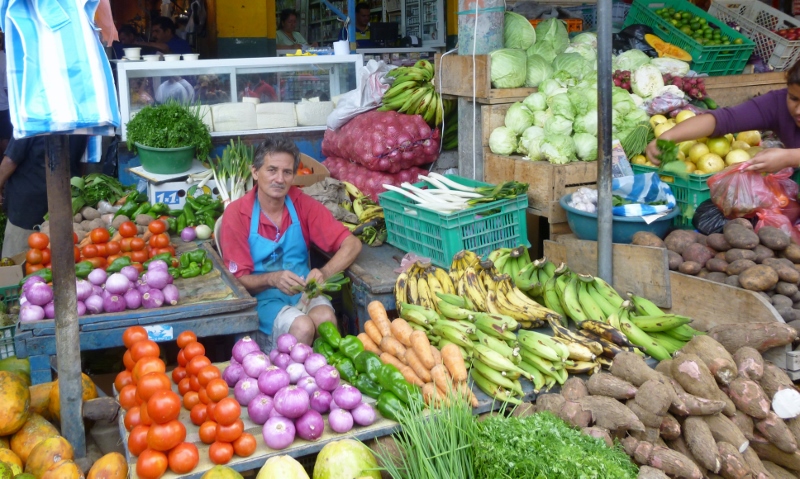 On a daily basis, seven days a week, live chickens and ducks, plucked chickens with feet still attached and a harvest from the sea arrive. The heart of the market is, of course, the produce. The vendors, some on the sidewalks but most abutted to the curbs, display their wares in stunningly colorful geometric piles and pyramids of fruits and vegetables.

Incredible values are available; a bag of six green peppers goes for fifty cents.  We pay another fifty cents for a bag of fifty to sixty whole, cleaned garlic cloves and are charged 75 cents for a large bag of thirty to forty radishes.  A young man from the nearby town of Jipijapa (Hippy-Hoppa) sells large loaves of banana-nut bread, fresh and amazingly fragrant, baked by his aunt. This still-warm bundle goes in one of our backpacks to be consumed later with the best-ever, ginormous fresh strawberries.

Into this teeming mix of buyers, sellers and lookie-loos which fill the streets, taxis and trucks advance with a slow determination. If you’ve ever witnessed a car drive though a herd of sheep or cattle on a country road you get the picture.  It’s literally a game of give and take with the taxi inching its way deliberately through the teeming multitudes and ultimately gaining the upper hand as no one really wants a smashed toe.

And then, as we venture beyond the produce vendors, who congregate near the major thoroughfare at the north end of Tarqui, we encounter the rest of the vast variety of merchants who sell bootlegged CD’s and DVD’s, clothing, plastic items, breads and pastries, car parts, stuffed toys, construction materials, kitchen items and on and on. Behind the vendor’s facades are the stores themselves and occasional alleyways that break the symmetry of the store fronts and allow access to an interior rabbit warren of more small shops, some of which have multiple entrances and exits, and all of which sell –  guess what? – more of what is on the sidewalks outside. 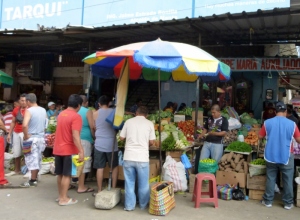 Of course, we have the option to shop in the several supermarkets dotted here and there throughout the city, such as GranAki, Mi Comisario and Super Maxi among others. Modeled after their western counterparts they offer ease and convenience in a sanitized package at, almost always, higher prices.  And Tarqui, while similar to street markets in other Latin countries with an echo of having done this before, offers a slightly difference experience; maybe because it’s a different country on a different continent. But here, there’s a spirit of cooperation with buyers and sellers working together to make sure everyone’s a winner.  Buying and selling goes on the world around, but this, friends, is commerce Ecuadorian style in Tarqui. 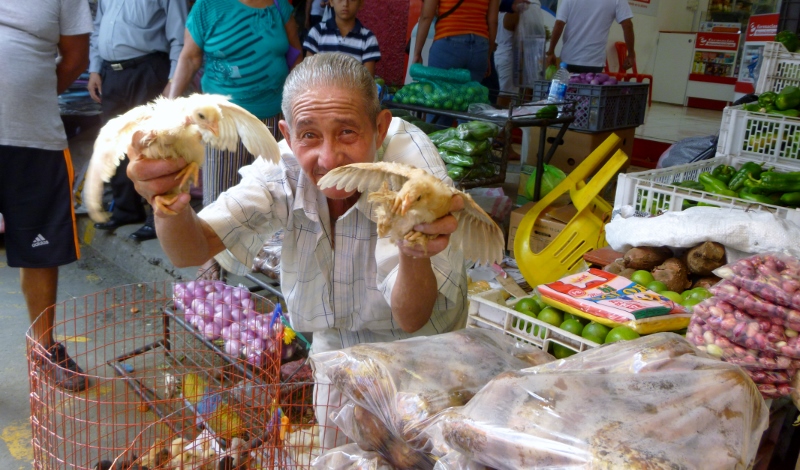