Drivin’ Along in My Automobile … to Puerto Lopez 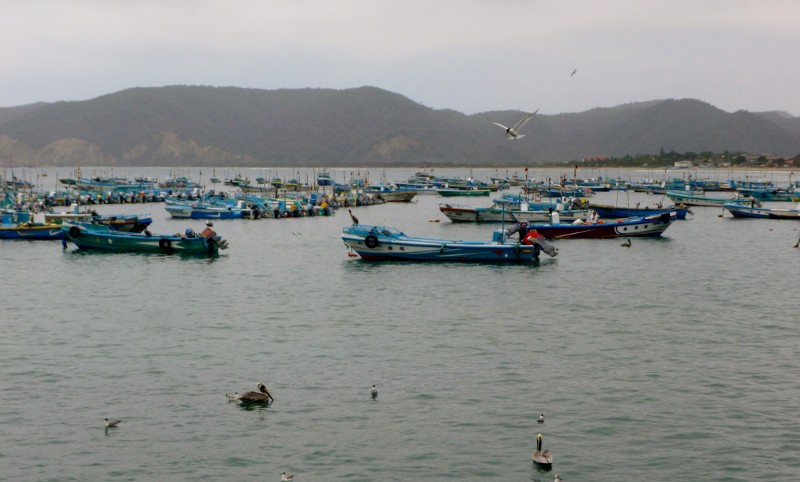 We’d wanted to visit the bustling fishing village and eco-tourism hub, Puerto Lopez, south of Manta since we’d arrived in Ecuador and when Barb, our Canadian mentor and friend here in Manta, invited us to drive there we jumped at the opportunity.  Puerto Lopez serves as headquarters for the Parque Nacional de Machlilla, a whale watching port and is a jumping off point for the Isla de la Plata, known as the Poor Man’s Galapagos, which hosts many of the same sea and shore birds as the Galapagos Islands with a day trip costing only $35. 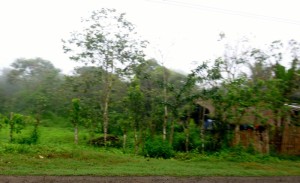 It was an overcast day as we climbed away from the arid landscape of the coast; the leaden sky gave up a light fog which in turn yielded to a fine mist. The grayness of the drizzle contrasted sharply with the lush greens of a micro-climate through which we passed for a time and then, once we crested the hill and began the descent, we returned to the cacti and scrub of the native coastal desert.

Driving through the more typical barrenness of the land, we slid through the nondescript pueblos of the campo, the countryside, of Ecuador. There was no glitter in La Pina, no tourist destinations in Santa Rosa. The surroundings through which we passed were the earthen tones of the uncompromising land itself; the dull red of the bricks, the unpainted gray of the cinder blocks and the fading gold of bamboo turning a monotonous brown with the passing of time.  The colors seemed to be drained by wind, sand and salt air and within were sheltered extended families striving to eke a living from the land and sea.  And somewhere within the mass of dwellings would be one or more churches each proffering its claims of grace in the afterlife as precious little of it was available here. This was the rural side of Ecuador and its people not, as yet, invited to sit at the tables of the middle class.  In this nation of relative prosperity, the country folks stood in stark comparison to their city cousins.

As if to mirror the image projected by the villages, the sea faded into the sky, foam pushed close to shore, the rocky shingle of the beach mocked the absence of the sandy stretches elsewhere to the north and south. The view was more stark and on this particular morning it appeared that the seascape was about the immensity of the ocean itself, offering little succor.

We were well past the mid-point of the trip to Puerto Lopez when we pulled into the sleepy little village of Machalilla outside the national park of the same name. It was a small town of indeterminate size with a concave malecon circled around an arched, sandy bay.  Three parallel streets crowded into the bowl area delineated by the highway which hugged the hill furthest back from the water. The town was in desperate need of a facelift: stucco patching, fresh paint for the buildings as well as asphalt in the frame-rattling pot holes. But the beach was a scenic attraction stretched around a half-moon bay.  Small fishing boats were lined up on the fine sand or in the water among larger ships rigged out with fishing nets. After reconnoitering the city and snapping a few photos we departed for our final destination.

A few more miles and we arrived at Puerto Lopez. The humpback whales had departed the waters near Puerto Lopez for the season as had several species of birds from the Isla de la Plata.  We walked down the new pier for a long overdue view of the sea birds. Peruvian pelicans, closely related to the brown pelicans of the U.S., were in fine form plunging again and again into schools of fish close by the pilings. 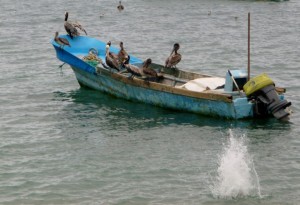 Small terns harassed the pelicans unsuccessfully as they emerged from their headlong dives with their beaks streaming with seawater and a morsel of fish. Overhead the Great Frigate Birds circled and looked for opportunities to quickly snatch a tidbit from an unwary, feathered competitor. Gulls, few in number, sat in desultory knots away from the action with little hope of getting into the game. The black vultures drifted on the winds or hopped about on the sand dejected by the paucity of options available to them at the moment but their time would come when the fishing boats returned. 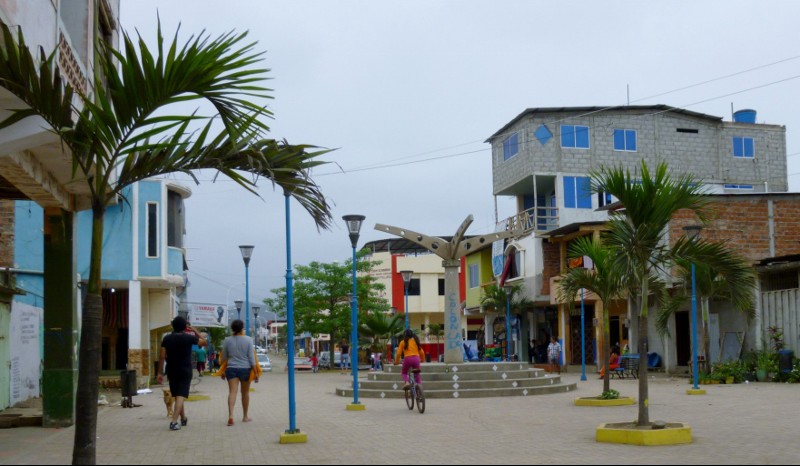 We ambled by the numerous hotels, hostels and tourist agencies and browsed through the souvenir shops before we sat down to a fresh seafood meal, indifferently cooked, of shrimp and rice.  After a bill negotiation with a waitress who had trouble adding accurately we climbed back into the car and pointed the wheels north towards Manta. Our slow journey was retraced through the small villages and rural areas while we kept an eye out for the wild burros that we had seen alongside the road.