Off to Great Places in Cartagena de Indias

Posted on January 3, 2015 by Anita and Richard @ No Particular Place To Go 36 comments

“You’re on your own. And you know what you know. And you are the one who’ll decide where to go.”  The Places You’ll Go, Dr. Seuss

We arrived promptly at el Museo del Naval de Carib at 1:15 where we met Irsis, our English-speaking guide from the previous day. It was he who had suggested that we take the city tour which included several of the scenic sights in this phenomenal port city. Plus he could offer it at 20% off the price quoted to us by a previous vendor. So, after having a complimentary coffee that was heavily sugared, we departed through one of the gates in the city’s walls to meet the bus which would be our chariot for the remainder of the day.

“Congratulations! Today is your day. You’re off to Great Places! You’re off and away.” Ibid. 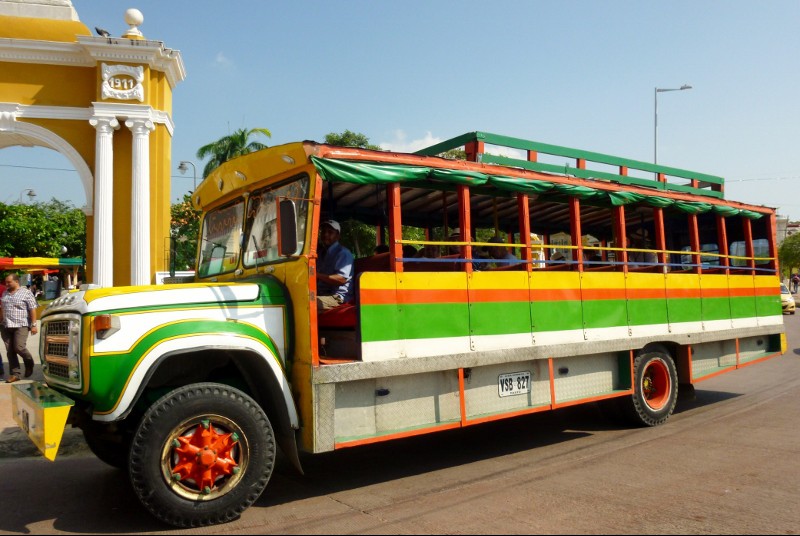 We were greatly pleased when we saw our tour bus painted in gaudy colors with Bob Marley and the Wailers blaring out of the open sides; it was nothing so much as a rolling Sesame Street colored boom box. Firmly ensconced in our open aired seats we departed, taking a jaunt around the Parque Centenario en route to barrio Bocagrande, the richest barrio in this city of 1.2 million built along the powdery white sand beach of Cartagena’s harbor. As we tootled around collecting the rest of the paid passengers we gawked at the shops, many similar to tony venues in the States. With our full complement of lookie-loos we turned towards our first destination of the day, the waterfront at the city’s marina. Colombia’s navy and army maintain bases in the port area while, in the commercial area, the gantry cranes stand ready to on or off load containerized cargos from ocean-going transports. Small parks abutting the malecon appear in less congested areas.  Berthing privileges are also extended to the massive cruise liners that make ports-of-call in Cartagena.  To our chagrin, we observed their disgorged passengers as they followed their leader’s standard literally blocking the city’s narrow streets like a flock of demented goslings. 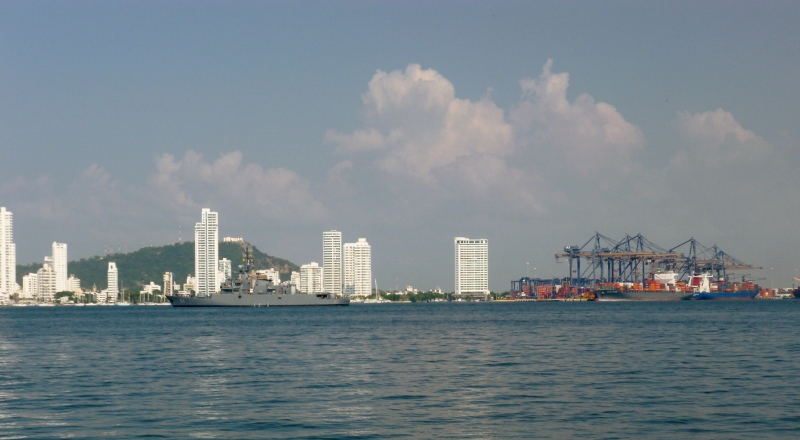 “You’re off to great places! Today is your day! Your mountain is waiting. So … Get on your way!” Ibid.

Our next stop, and the main reason we had joined the tour, was a visit to the Cerro de Popa which would allow us an elevated view of the city, the harbor, the scattered islands and the waterways that enveloped the old walled city of Cartagena.  The name literally means Convent of the Stern referring to the similarity between the 492-foot hillock and the back end of a ship.  Perched at the top and overlooking the city with its white walls reflecting the sun’s rays is a picturesque colonial church (circa 1611) and a convent. 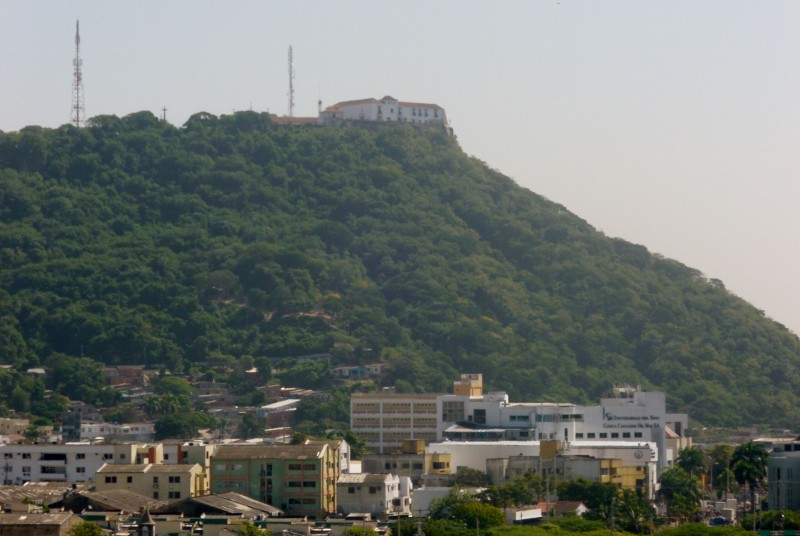 We learned that during the early years of the colony, around 1535, a clandestine shrine existed upon the hill which was used by the indigenous inhabitants and African slaves to worship the deity Buziriaco, which, history records, resembled a goat. Legend has it that an Augustinian priest received, in a dream, an order from the Virgin Mary to erect a monastery on the site. Having traveled to the hill of La Popa the padre discovered the goat shrine and promptly pitched it down the mount. This must have come as an immense relief to the indigenous Indians and black slaves, as normal retribution for such sacrilege by the Spanish involved nasty torture or hideous death and, on a bad day, both. Pitching the goat shrine down the hill was bupkis.

Ultimately, the ride to the top of the mountain was more memorable for the grinding of gears and the acrid odor of charred motor oil issuing from the antiquated engine of our glitzy boom-box bus than the Convent itself but inside was housed a memorable, dazzling altar encrusted in 22-carat gold leaf – a rather impressive upgrade from the now defunct Buziriaco goat shrine. 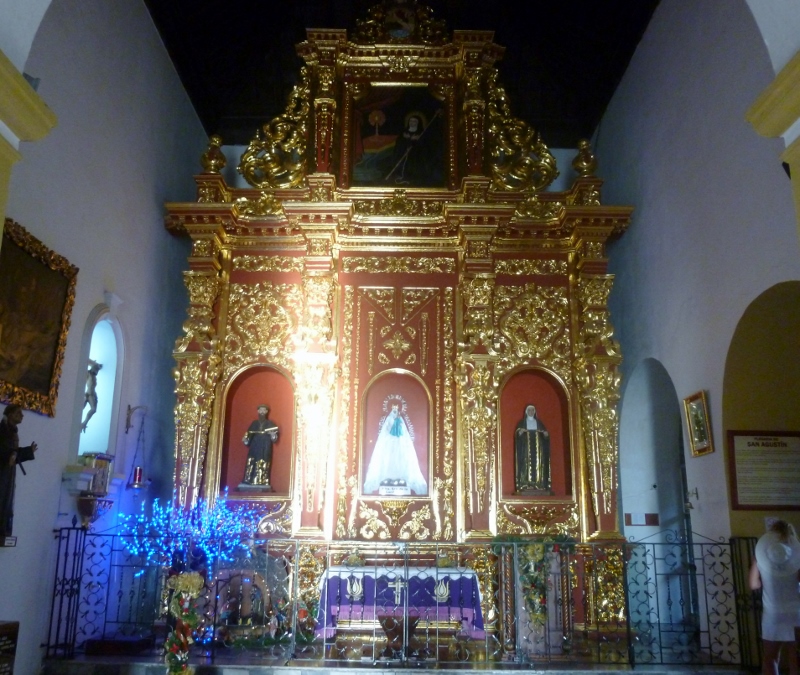 We made two more stops prior to the finale, the first presented an absolutely impressive venue, the Castillo San Felipe de Barajas which we decided deserved another more lengthy visit and a later post all its own and the second stop to a sculpture of a pair of high-top sneakers that had little visual or historic note which we hereby omit.

“Things may happen and often do to people as brainy and footsy as you.”, Ibid.

Our chariot came to its last stop in front of the old Officers’ Quarters, later converted into a prison and now in a revitalized iteration as a Latinized mini-strip mall. Approximately twenty small tiendas selling Colombian handicrafts, a combination of beautifully worked goods and shoddy souvenirs, were housed in the stuccoed and gaily painted barracks. During the half hour we were allotted, we wandered through six or seven shops before selecting a bolsa, a cloth bag, in black with a brightly colored embroidered and appliqued red parrot on the front to use as a packing organizer. 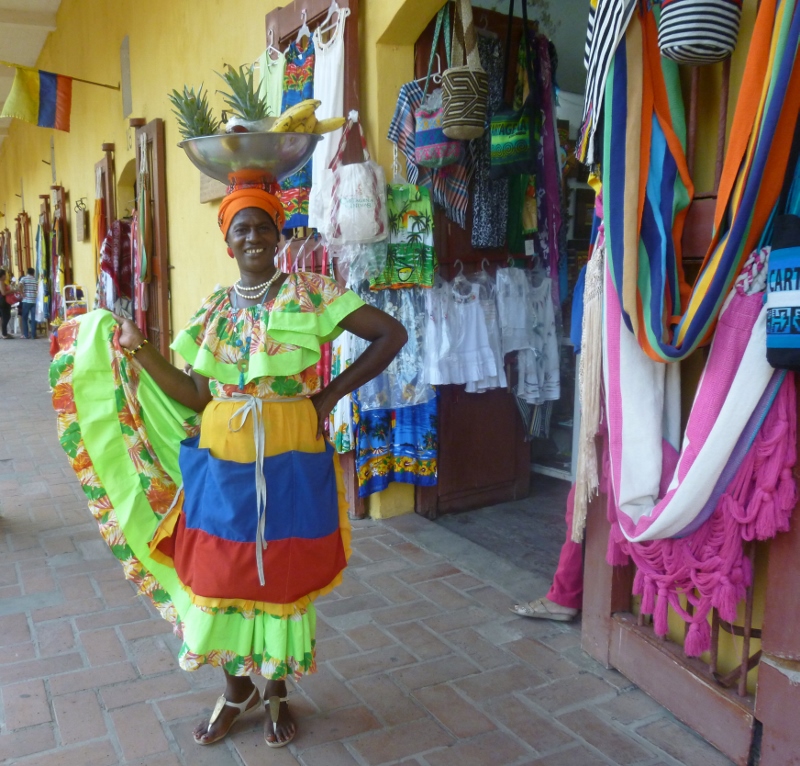 “Just never forget to be dexterous and deft. And never mix up your right foot with your left. And, will you succeed? Yes! You will indeed! (98 and ¾ percent guaranteed.)”, Ibid.

And so, five hours later and $36 lighter we were dropped off on a side street inside the walled city. We perambulated over to what has become one of our favorite eateries, Ilsabe, for a pleasant meal and emerged after dark to stroll the narrow streets decorated for the holidays, the lights in gay profusion from balconies, statues and enormous Christmas trees that decorated almost every park and plaza. It was a wonderful way to end a raucous and informative day in the city by the sea. 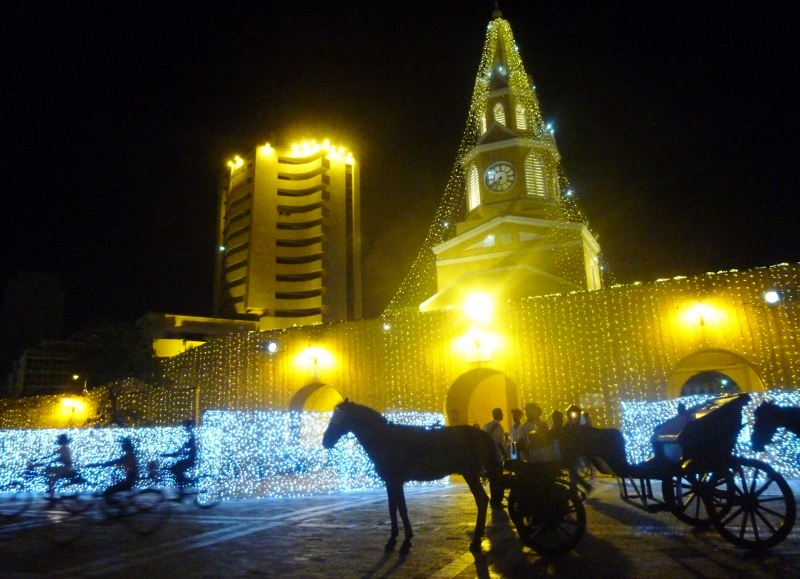 We are indebted to Dr. Seuss, ne: Theodore Gisselle, for his marvelous creation The Places You’ll Go, published January 22, 1990 by Random House Publishing Co. While it was the last book he was to write it was the first book that truly inspired us in our visions of travel.