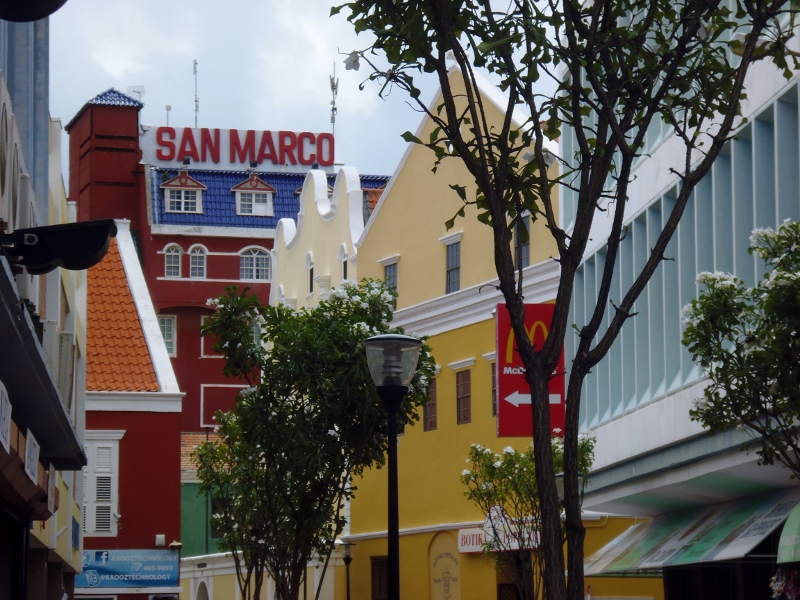 Amazed! Bedazzled! Captivated!  We could continue to run through the alphabet of words to describe our reaction from the moment we stepped off the plane through the weeks we spent driving about, swimming, strolling and hiking our way through this little island nation.  But there’s no doubt about it – Curacao is all about c-o-l-o-r. 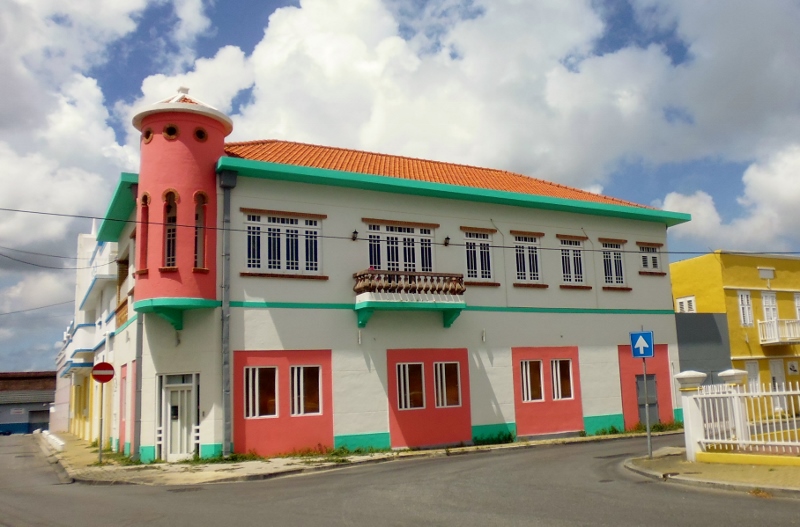 However, it wasn’t always that way.  Curacao’s origins date all the way back to 1634 and the original buildings were constructed from island stones and coral or bricks from incoming ships that had been used as ballast.  These structures were then coated with a lime plaster made from crushed coral and shells and the sticky paste from the aloe vera plant.  The white facades reflected the rays of the intense Caribbean sun and the sight of these white stucco edifices against the vivid blue sky must have been quite dazzling. 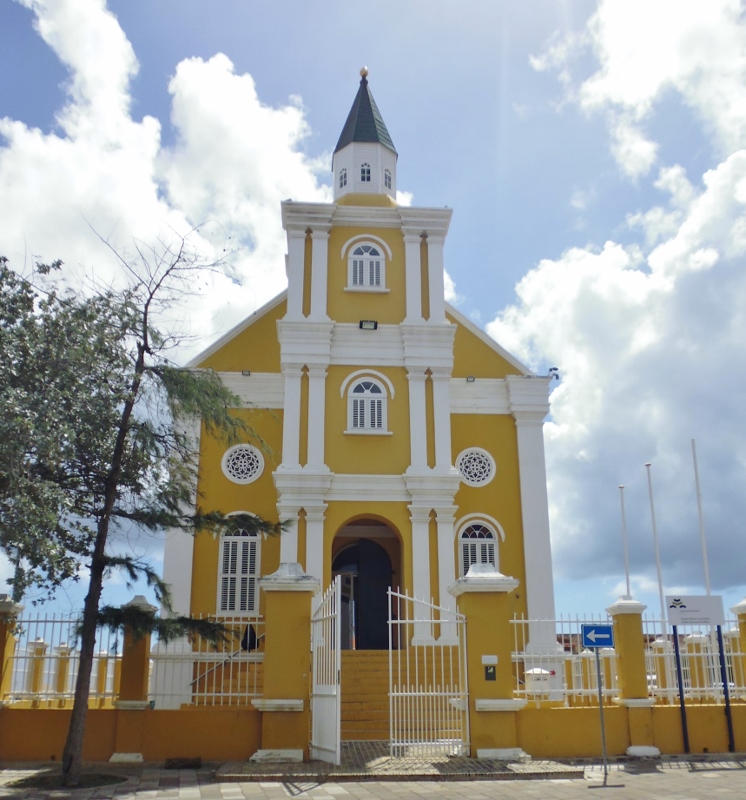 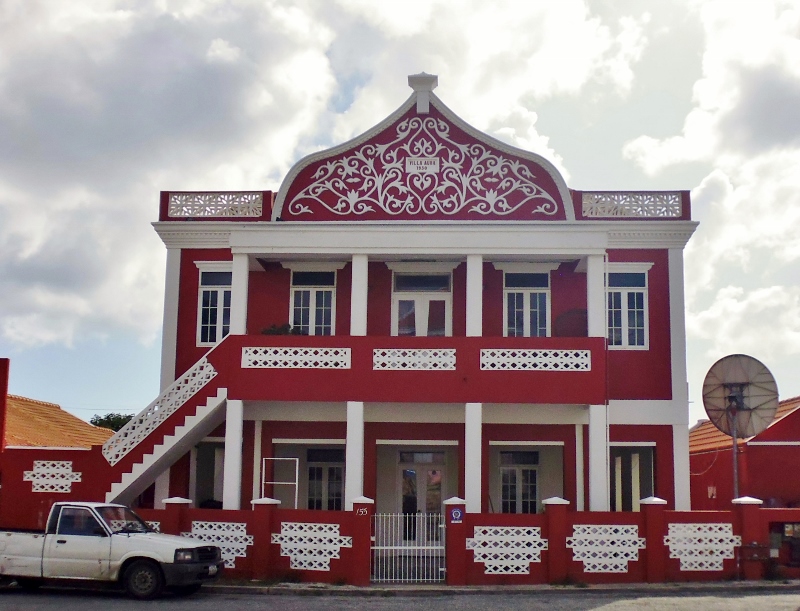 And here’s where the legend of Curacao’s love affair with color begins. There are many variations to the story (and the locals will be delighted to tell you them!) but it seems that the early 19th century Governor-General, Albert Kikkert, suffered from killer headaches. Thought to have been migraines, he believed that his severe headaches were exacerbated by the glare of the sun reflecting off the brilliant white buildings.  In the grand tradition of a ruling pooh-bah he issued an edict in 1817 that the buildings of Curacao be painted in a color other than white.    All the government buildings including the governor’s home were painted a deep yellow which still seems to be a favorite color throughout the island today.  And to take the story a few steps further and uncover a mercenary motive, we’ve heard it told that the governor had an interest in the local paint business, hence the mandate.   Another variant of the story was that paint colors were priced differently and yellow was the cheapest.  People painted their homes with more costly colors and even used two or more accent colors to reflect their status and boast about their wealth.  Some things never change… 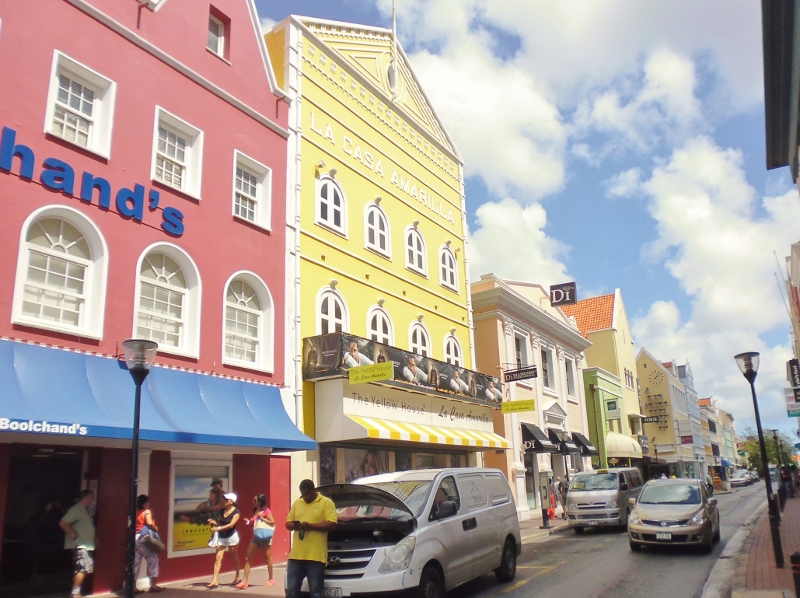 Google Curacao and one of the first pictures that appears is the historical waterfront, Handelskade, on the Punda side of Sint Anna Bay with its Dutch colonial houses painted in a kaleidoscope of colors.  Named number eight on Tripadvisor’s 2012 “Top 10: Fantastically colorful places,” the blocks and blocks of colorful homes and businesses in Willemstad’s Punda, Otra Banda and Scharloo historic districts will wow even the most travel weary.  And no one will dispute any of the reasons that Willemstad was designated a World Heritage Site by UNESCO in 1997. 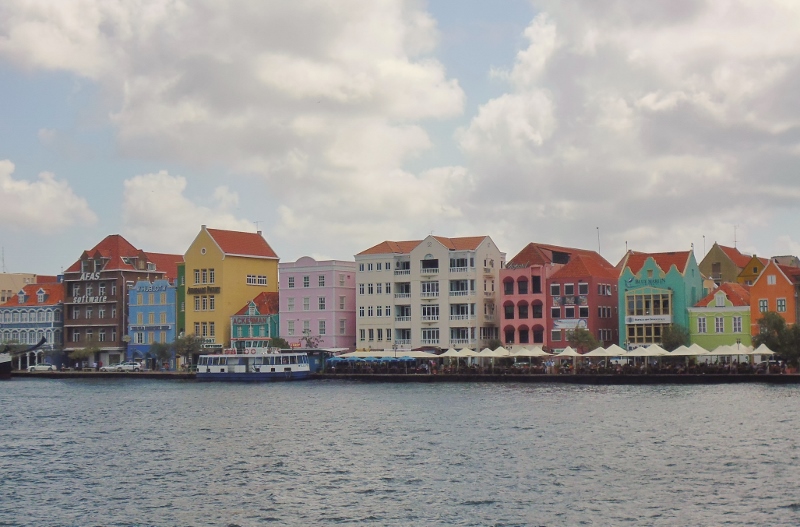 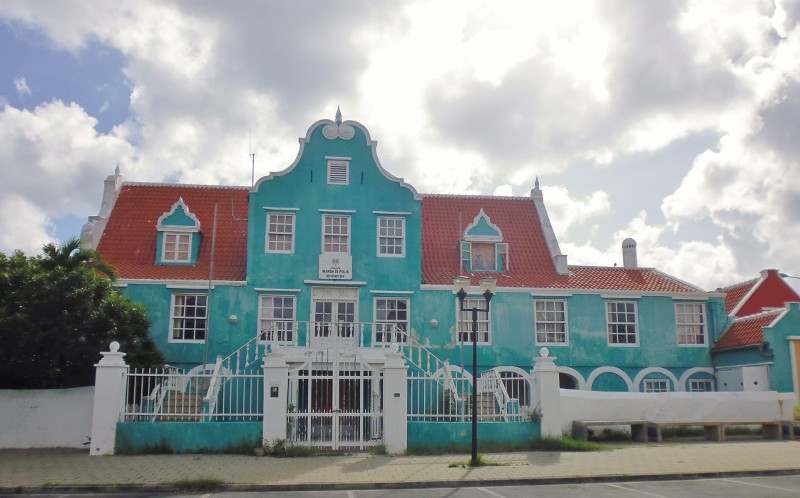 But the colors of Curacao are far greater than just the picturesque painted houses and businesses found ubiquitously throughout the island.   Everywhere one looks there’s a color that pops.  Overhead is the brilliant, bright blue sky with soft white cumulous clouds and the vivid orange troupials flying by or parakeets and parrots.  The Caribbean Sea shimmers, undulates, waves and roils in shades from a clear shimmering turquoise to a deep blue.  During rainy season green hues are underfoot and overhead. The largest park in Curacao, Christoffel, is filled with the deep greens of the many species of cactus, flowering in season, orchids and trees like the divi-divi or the highly poisonous, lime-green manchineel tree with its small and sweet but very toxic little apples.  And did we mention the corals and colorful fish below the water’s surface or the flamingoes wading through the Jan Kok salt pans? 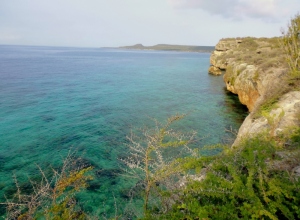 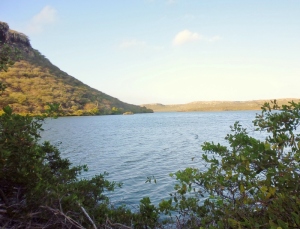 Curacao could almost be compared to an onion with many layers.  For those who visit Willemstad for a day of sightseeing from one of the numerous cruise ships, the medley of Caribbean colored architecture with its curlicues and shuttered windows found throughout the winding city streets are the first few tiers.  But, if time allows and you have a few weeks or longer the island won’t disappoint you.  There are myriad opportunities for the eyes to behold the variety of hues existing with each new layer that is peeled back. It’s impossible to leave Curacao without a belief that you have witnessed something unique. 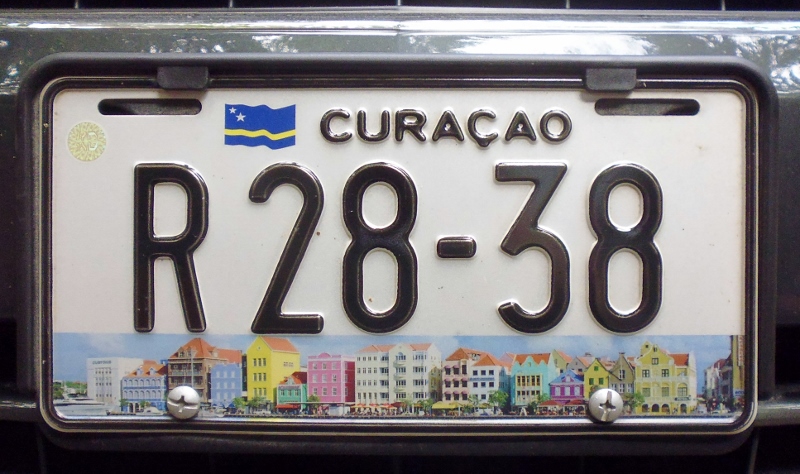