Diego, The Ocean Blue and What’s an Alcázar? 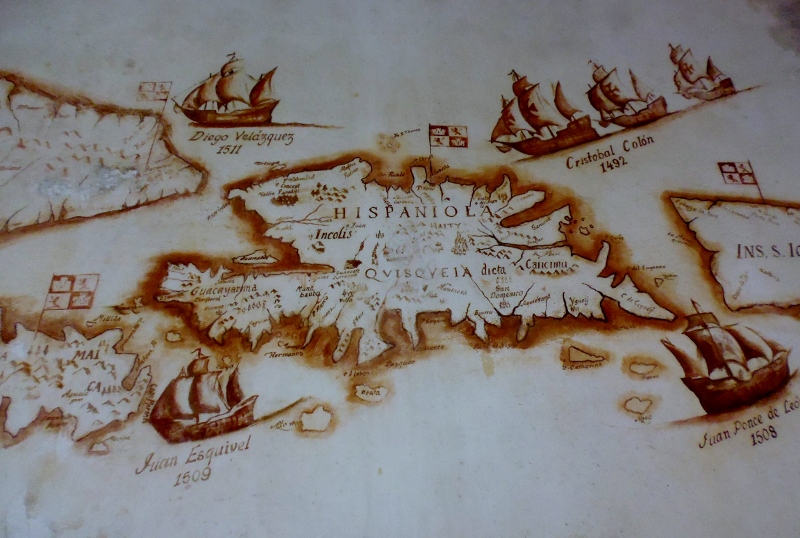 Those of us who are a “certain age” grew up with the rhyme, “In fourteen hundred ninety-two Columbus sailed the ocean blue…”  We learned of Christopher Columbus (now the subject of a hot debate but we’ll pass on that story) and his voyage west, bumping into the “New World” along the way.  But we never heard about his family. His eldest son, Diego, for example, spent much of his adult life trying to regain the titles and perquisites bestowed upon his explorer father that were stripped from Christopher in 1500. Being a clever fellow like his padre, Diego married a woman with family ties to King Ferdinand. Recently, we became aware of the younger Colombo during our visit to the Alcázar de Colón in the historic central district of Santo Domingo, the Zona Colonial, now a UNESCO World Heritage Site. 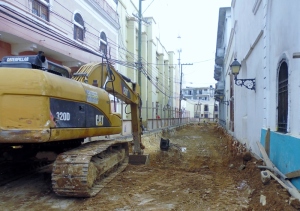 Our road trip to the capital city of the Dominican Republic began smoothly enough as well-marked and maintained toll roads run between Punta Cana and Santo Domingo. Upon reaching the sprawling city, however, the carefully thought out route to the hotel that our friends had downloaded to their iPad went awry.  Roads in the center of town were completely blocked off by piles of bricks, paving stones and mounds of dirt with huge gaping holes where the streets had once been.  A massive project of renovation and utility improvements within the old city was underway.

And there we were, driving down a one way-street the wrong way, four pairs of eyes looking frantically for a street sign to hint at our location.  A stern-looking representative of the Nacional Policia motioned us to stop with an imperious wave of his hand, allowed us to turn around and then led us along an unimaginably complex route to the destination where we were quartered for the evening. The officer finally smiled as profuse thanks were offered by all of us and we lugged our bags into the Boutique Hotel Palacio.  A few minutes later one of the hotel staff informed us that the policeman was still outside and we, somewhat gingerly, inquired of the officer if it was permissible to offer a “propina” (a gratuity) for such exemplary service. “Only,” he gravely and courteously replied, “If we wished to do so…” 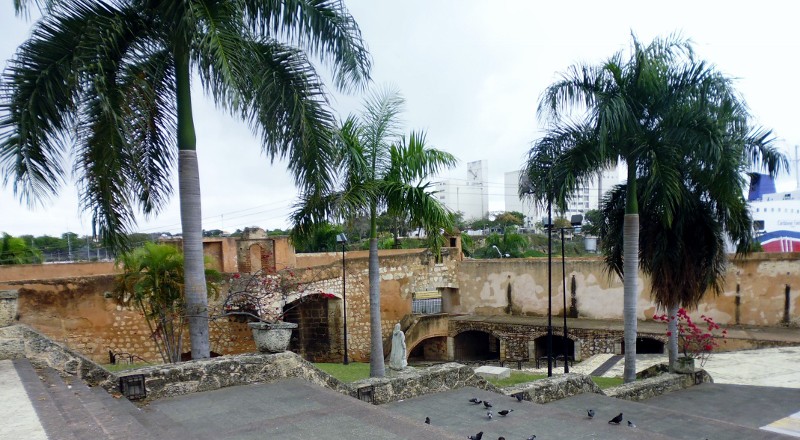 side view of Alcázar de Colón

But, we digress.  Back to Diego and the Alcázar de Colón, the most visited museum in Santo Domingo. The royal palace was commissioned by Diego who became the Viceroy of Hispaniola in 1509 assuming the post his father had previously held. Construction initially began between 1510 and 1512 and, when it was finally completed, it encompassed fifty-five rooms and was the Viceroy’s residence as well as the administrative center of the New World for much of the 16th century.

Today only twenty-two rooms survive and we’re fortunate to have them.  Our old friend, whose dastardly deeds we’d first run into in Panama and then Colombia, the English Admiral Sir Francis Drake, sacked the Alcázar, or Palace, in 1586.  As the importance of Santo Domingo waned in the New World, the Alcazar was abandoned and fell into disrepair. Finally, in 1955, renovation began to preserve what remains.

Picture a square with a central courtyard populated by a few 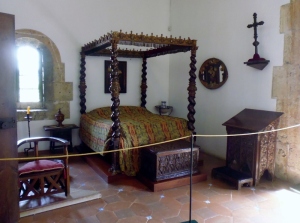 strutting peacocks and rooms leading like railroad cars to other rooms.  Weaving our way between tour groups of school children we tried hard to stay ahead or behind them as we went from one display to another admiring the period pieces of furniture, paintings, tapestries, armaments, clothing and other accoutrements of life among the royal families.  As an aside, it’s an unnerving feeling to be contemplating a royal dignitary’s bedroom, with its itsy-bitsy little bed, trunks, chairs and bureau (for they truly were small people) and look out the open-shuttered window and view a cruise ship docked not two hundred yards distant alongside the quay in the old city dwarfing the Alcázar. 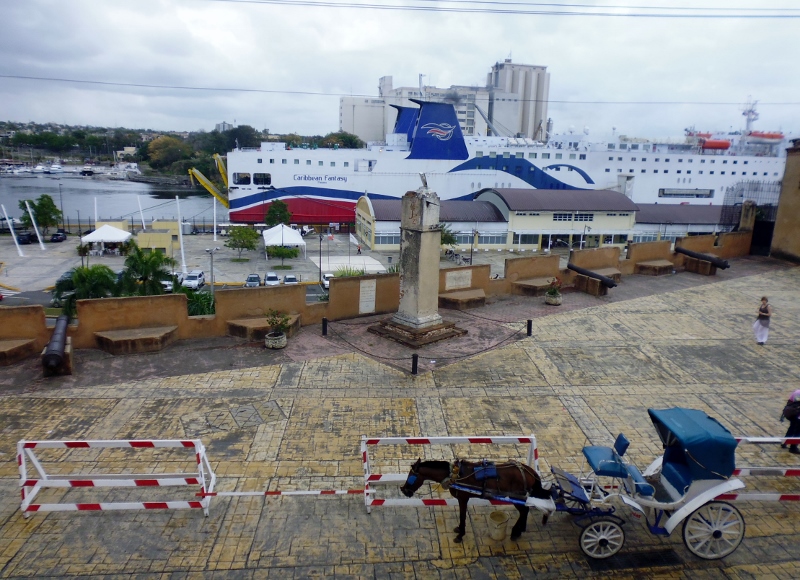 Entirely unique to our experiences in Latin America was a room containing what once must have been a fully stocked apothecary. A wall of individually labeled bottles, rather resembling Delft pottery in appearance, stored the herbs, spices, ground potions and liniments which an eminent physician would naturally have had at his disposal, especially when his clientele included the ruling masters of the New World.  Another wall contained shelves loaded with beakers, flasks, mortars and pestles, even a small copper distillery for producing the extracts and essences of the medicinal products. The Alcázar’s medical practitioner also possessed a handsome cabinet which, behind the screened front, revealed eighty-one individual drawers, each painted in exquisite detail, identifying its contents. While no plaques attested to the physician’s prowess in the healing arts this stupendous collection should, at the least, have assuaged some of the qualms of Diego Colón.

Much of our time in Santa Domingo was spent on the Calle da las Damas, the first cobblestoned street in the Americas and the heart of the New World back in the day. It lies parallel to the waterfront on the Caribbean Sea and the Ozama River and nearly abuts the Parque Colon and La Catedral de Santa Maria la Menor also known as La Catedral Primada de America, the first church of the Americas.

This venue houses the Museo de las Casas de Reales (Museum of the Royal Families) which was initially the Royal Court, the first court of law in the New World.  Also on the Calle de las Damas is the Panteón Nacional, originally a Jesuit church which, after many iterations, became the resting place of many of the leading revolutionary figures and national leaders. A single sentry stands a silent vigil over the crypts.

There’s more to see in the venerable old city of Santo Domingo, first established in 1496, than we anticipated.  We returned to Punta Cana with the feeling that we could have spent another day exploring and learning more about the UNESCO World Heritage site of the Zona Colonial and the first and oldest Spanish colonial city in the Americas. 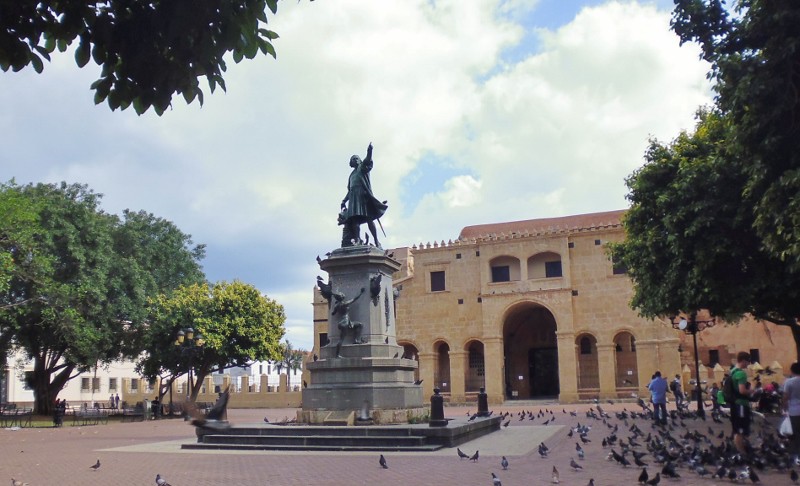