Look Up, Look Down, Look All Around 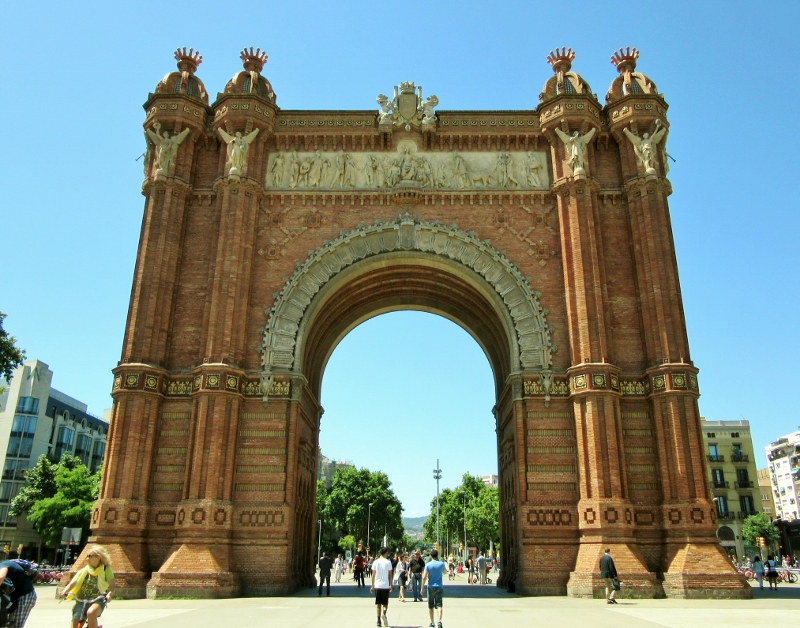 A couple of years ago we met a photographer friend, Paula, in Antigua, Guatemala who gave us some useful advice as we were checking out the sights.  Our eyes were trained on the uneven sidewalks and streets, both of cobblestone, to sidestep potential trips and falls and dog bombs.  When we looked around we’d try to steer clear of the numerous masonry windows, with decorative grille work, projecting from buildings at concussion-inducing head height and still try to take in the people, the sights and our surroundings.  And then our friend said, “Remember, if you don’t want to miss anything, look up.” 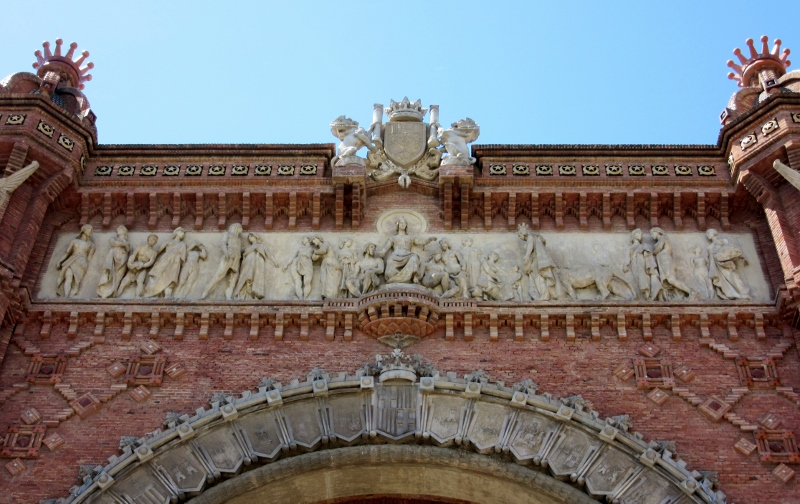 Luckily, in Barcelona there’s any number of things for a visitor to see regardless of where you look and one of the best ways is just walking around the city.  Our apartment was in the Eixample (Catalan for extension) district, a 19th century urban expansion that merged the old city with the 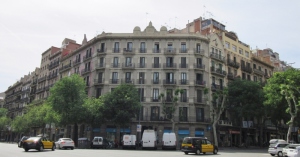 villages and towns nearby.  The urban plan was the brainchild of the progressive designer and Catalan Spaniard, Ildefonso Cerdá.  A strict grid pattern of long straight streets crossed by wide avenues helps to keep even the most directionally challenged people (we’re not naming names) oriented. Of course it helps that the streets have signs and numbers on the buildings and maps are readily available at tourist information sites as well as online.  The thing we were most taken with however, was Cerdá’s unique design of octagonal blocks (picture the corner building with its corner cut off) which allows for greater visibility at each intersection. 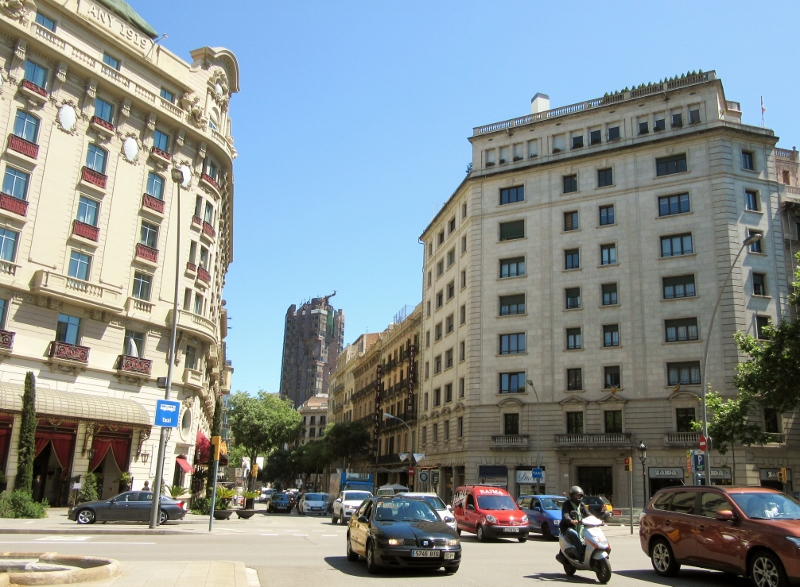 A five to forty-five minute walk from our apartment in any direction could take us to a flower, bakery or ice cream shop. 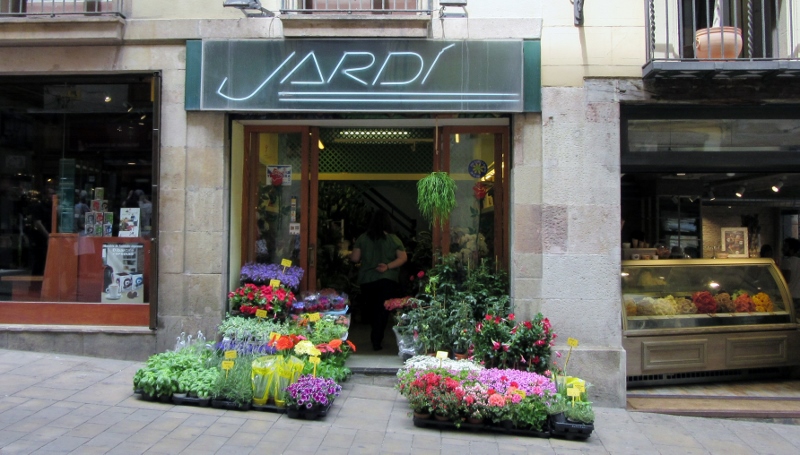 Or we could find a grocery store, farmacias (pharmacies) with their crosses of green or red displayed, organic fruit and vegetable shops and numerous ATMs as well as  metro stations. 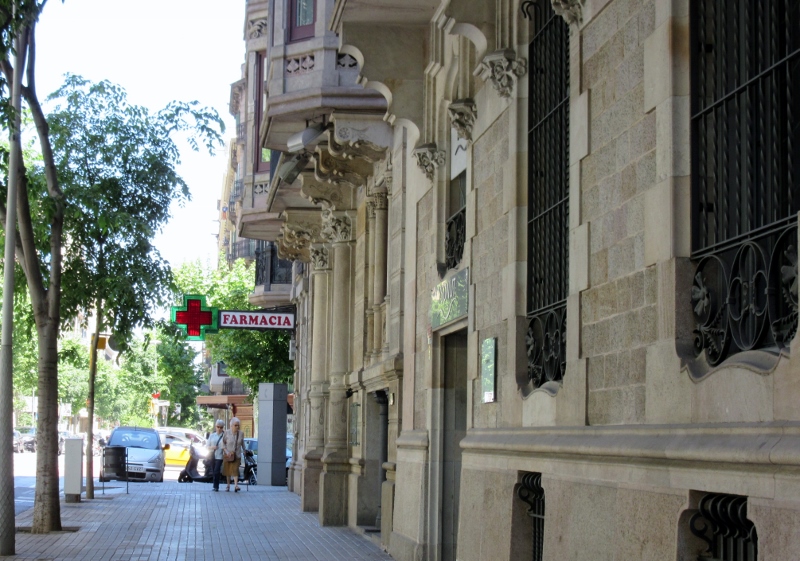 And of course there were elegant churches. 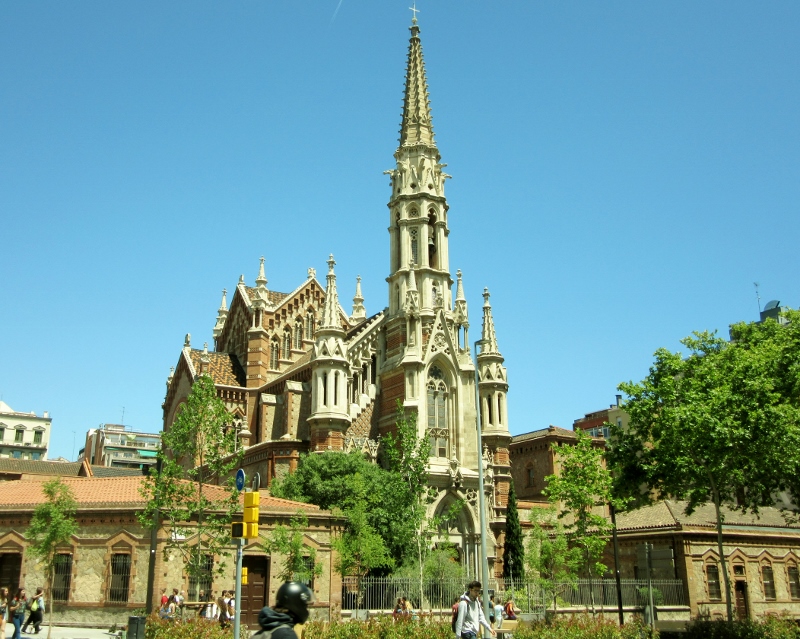 Nearby, we found numerous restaurants and tapas bars, trendy clothing stores and even a castle called the “House of Spikes” built in 1905 by the Terrades sisters. 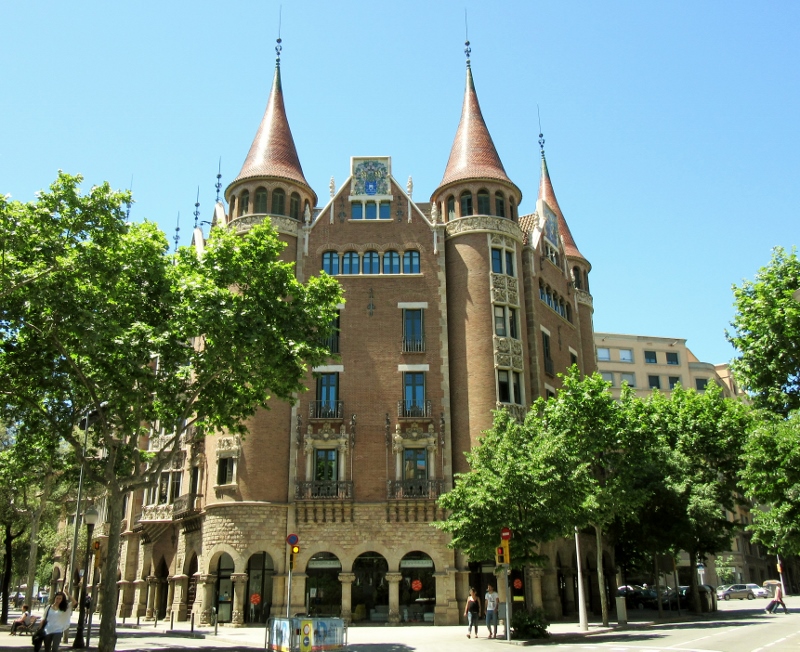 One Saturday we came across an enterprising company who had set up ping-pong tables on the wide sidewalks near the landmark, La Pedrera. 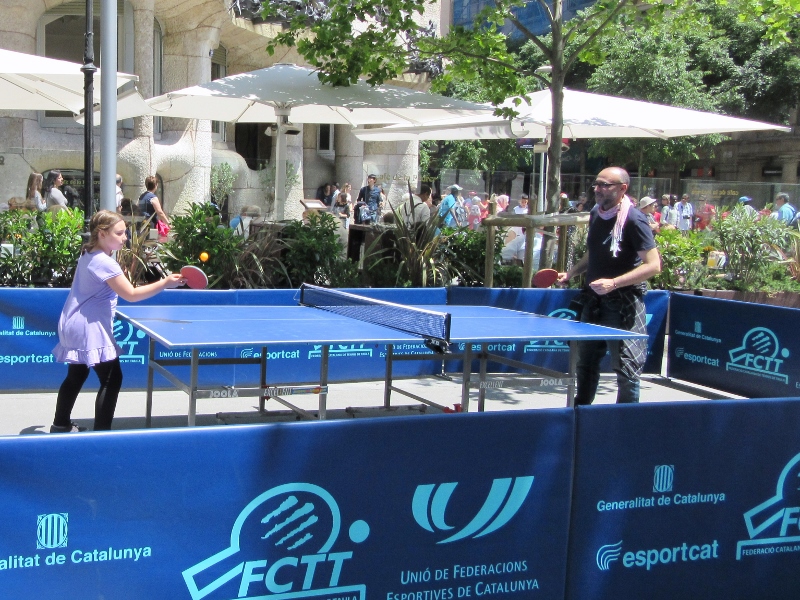 And on another sunny afternoon people relaxed near an avenue in lounge chairs that had been set out in the common area as an urban park. 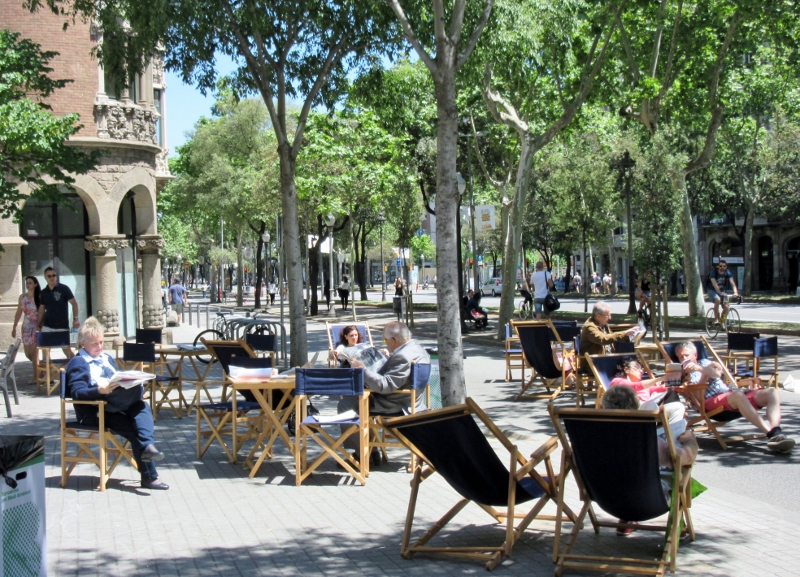 And we found one of Barcelona’s locations for its bicycle borrowing program called “El Bicing” where we could take one of the free city two-wheelers for a short spin.

Another way to look up, down and all around was riding around on the double-decker hop-on, hop- 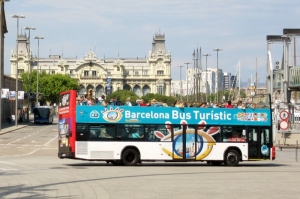 off buses.  We took advantage of these to orient ourselves to the city as well as sight-see and while we rode inside the bus for a few stops, riding on the upper level gave us an entirely different experience that we enjoyed much more. The city actually has two companies that offer the tours: the red buses from Barcelona City Tours with 2 routes and the blue and white buses from 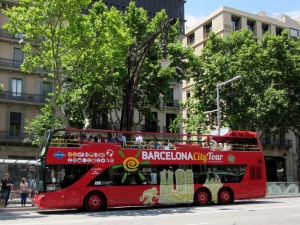 Barcelona Bus Touristic with 3 routes.  The prices are comparable, they both offer one or two-day tickets and each runs in a continuous loop from early morning to late in the evening so that passengers can hop off to visit the sights they want to see and then hop on for the next destination.  Audio guides and headsets give information in several languages and explain each area’s significance, pointing out landmarks along the way and giving a little history. 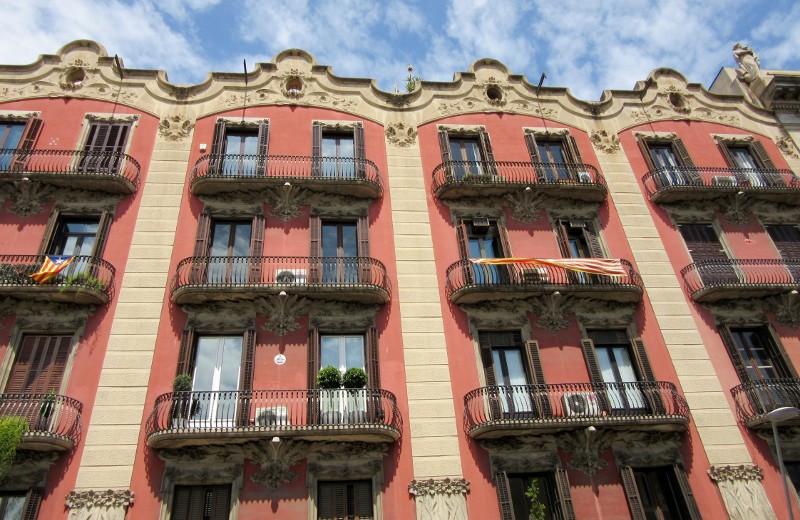 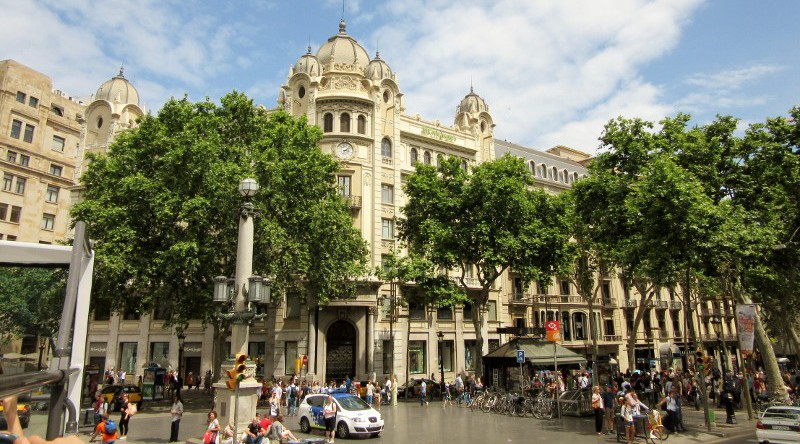 A few days into our visit to Barcelona both of us noticed our necks were stiff.  It wasn’t too difficult to figure out the cause as we were continually tipping our heads back or craning our necks.  There’s lots to see if one looks down, around and straight ahead but, in Barcelona it’s good to remember to LOOK UP too! 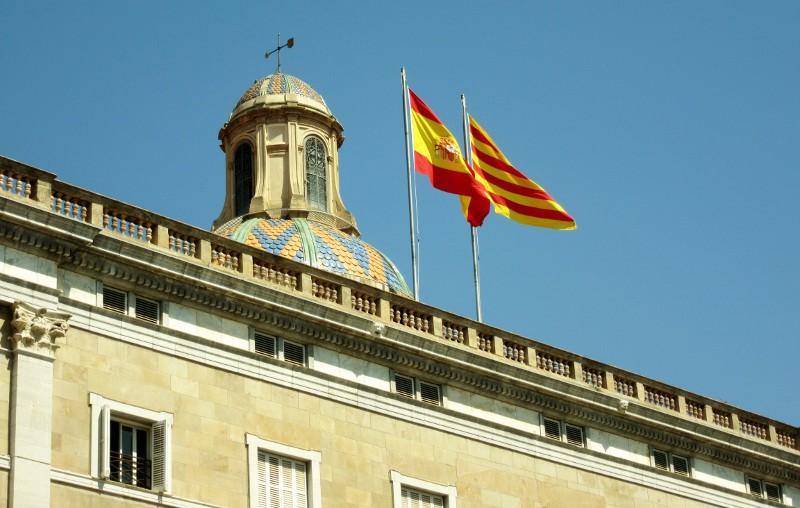 Catalan flag of Barcelona and the flag of Spain