Smoke Gets In Your Eyes: A Sausage Festival In Querenca

Querenca, with a population of less than 800 residents, is not a place that you’d stumble upon – you have to look for it.  Located in the central interior of Portugal’s Algarve region it’s at the end of a steep and winding road that makes you suspect you’re going nowhere but still feel curious to find out where nowhere might be located.  The drive itself is worth a trip to Querenca to see clichéd but oh-so-lush, green pastures with grazing sheep and pink flowering almond trees. One of the high points of our drive to the middle of nowhere was when we came upon a house between a hill and a creek which sat adjacent to the highway.  The home obviously pre-dated the two-lane, macadam roadway and the Portuguese manner of handling this engineering conundrum spoke to their national ethos. Rather than defacing the existing structure in any manner, there was a sign placed by the side of the road indicating that the thoroughfare was one lane for the next 40 meters or so to allow the driver to maneuver around the house.  And then the road reverted to a two-way.  A simple solution that causes no great inconvenience to those who drive along this road less traveled. 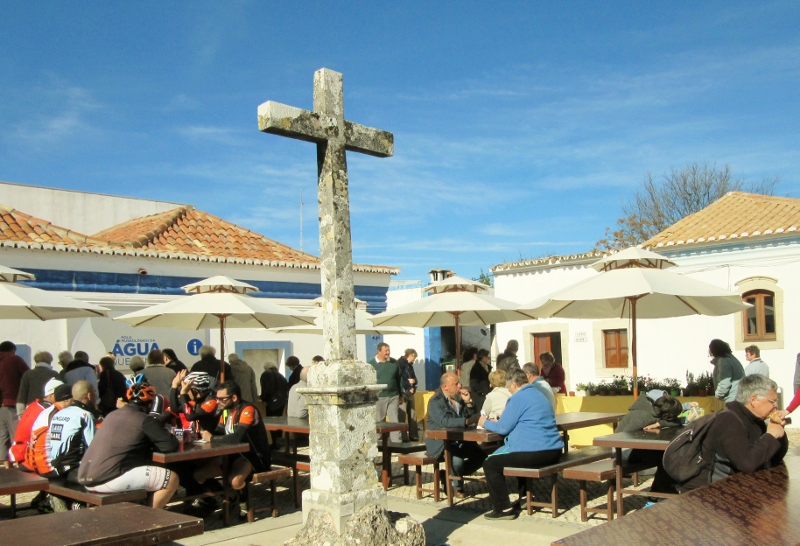 So what were we doing parking our car mid-morning on a dusty square under the watchful eyes of two frowning women who apparently wanted us to move our car a couple of centimeters closer to an invisible line?  We smiled and accommodated their request – everyone was happy.  And then we followed a small group of people up a hill that opened into a large plaza lined with a few restaurants and other businesses and dominated by a beautiful church dating back to the 16th century for … 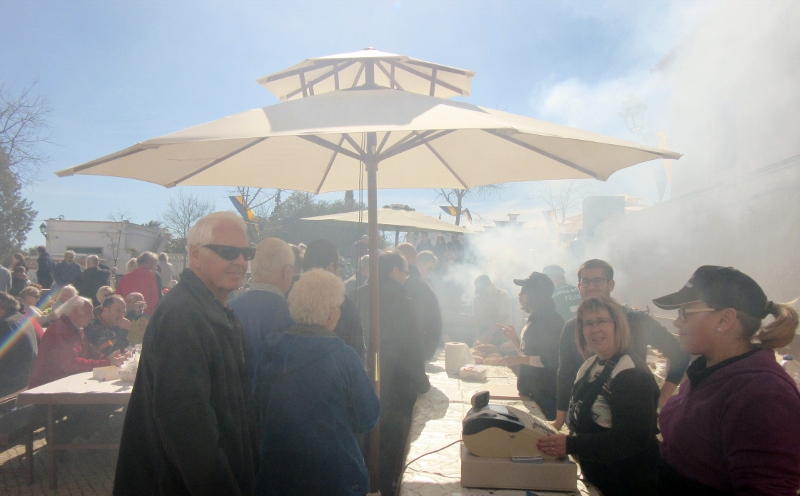 The Festa das Chouricas.  From the moment we’d heard about The Festival of Sausages in Querenca we knew this event had our names all over it.  Besides the prospect of stuffing our faces with the local chourica (a smoked sausage made of pork shoulder and spiced with paprika, lots of garlic, black pepper and salt and blessed with an offering of red Portuguese wine) we planned to sample some of the many tasty foods and libations for sale: olives, breads, nuts, various pastries, glittering bottles of liqueurs and wines. 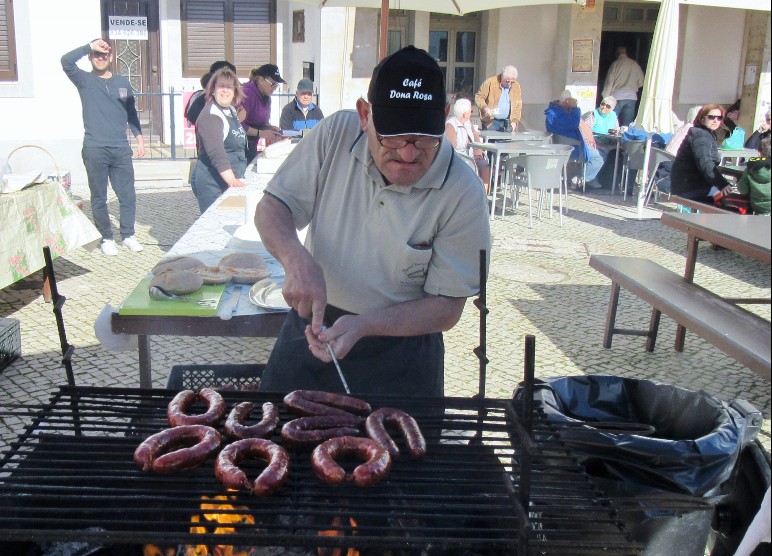 An annual tradition, the festival is held in honor of São Luís, the patron saint who protects the health and welfare of animals. In times past, the families of inland Algarve raised a pig to sustain themselves through the year and asked São Luís to safeguard it.  To thank the Saint, they offered their best homemade sausages and today the festival also raises money for local charities.  The festival draws an estimated crowd of at least a thousand visitors from many places around the region and the fund-raising looks to be a huge success. 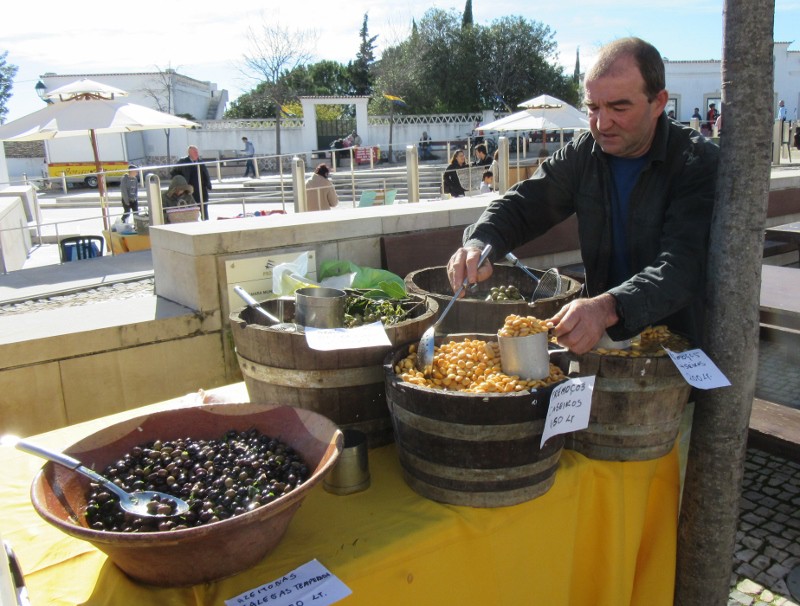 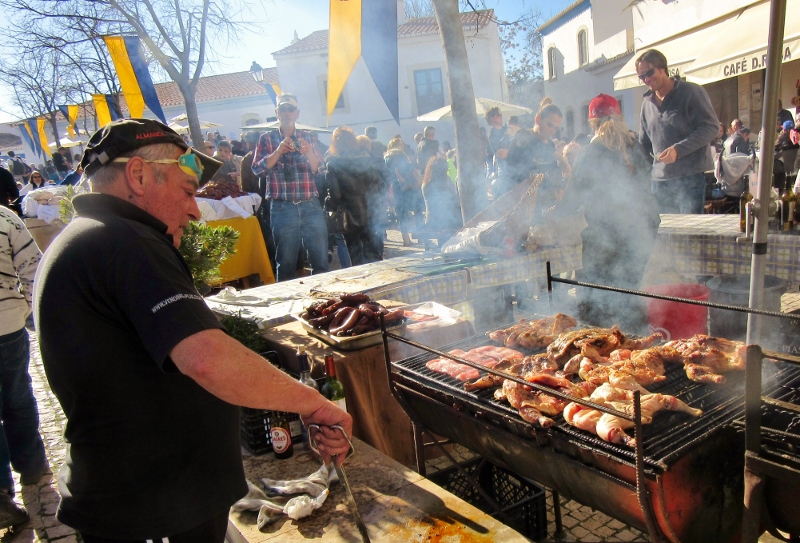 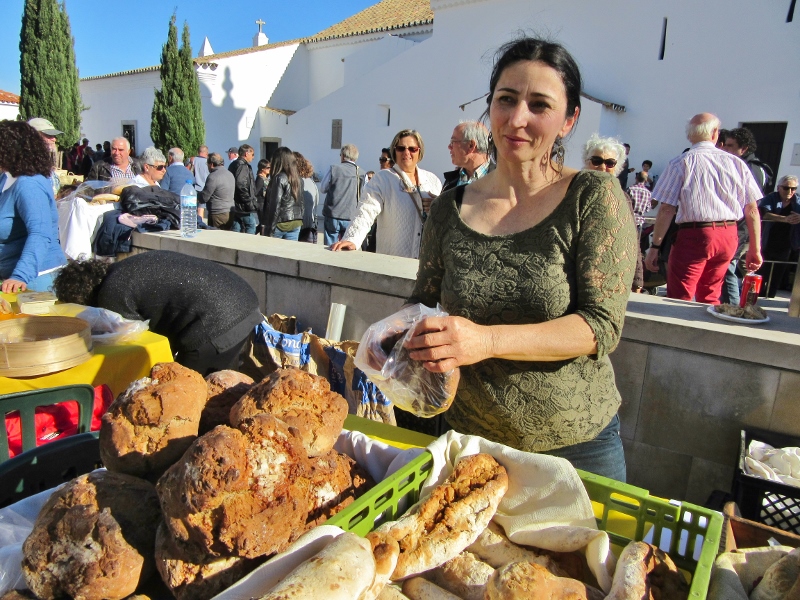 We walked around inhaling the perfume of chicken and sausage dripping fat upon the grill, admiring the local crafts on exhibit, drooling over the pastries and buying almonds and olives and handwoven baskets. The scent of grilled sausage became irresistible. Everywhere smoke hung in the air.  We stood in line and paid 7.50€ for a monster sausage on a crusty (made you feel glad to have your own teeth!) freshly baked roll that fed two. 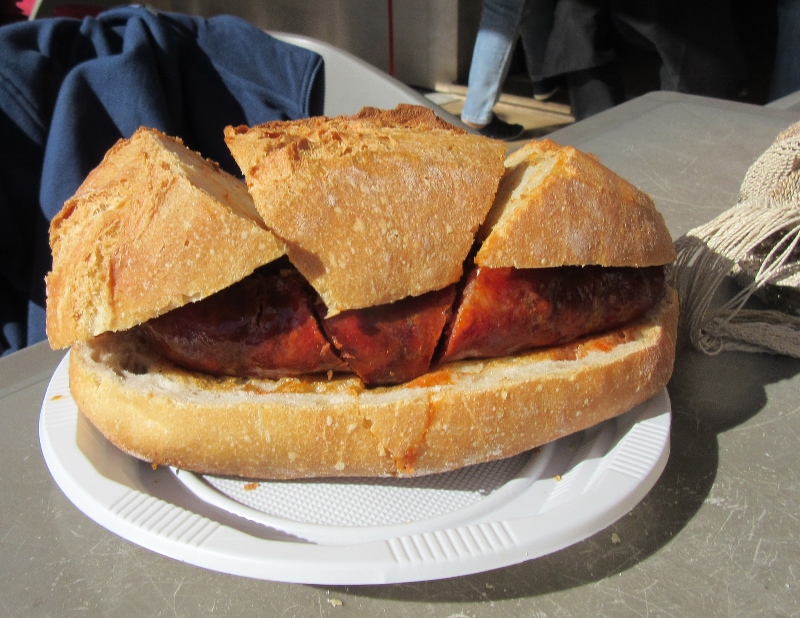 We stood in line to sample the quiche and share a huge piece of sweet fried bread dusted with sugar among us and our friends.  We chatted with other guests and vendors while the wind swirled billowing clouds of aromatic charcoal smoke from the grills around us.  And we people watched: vendors smiling and bargaining with guests, people enjoying the food and sunny afternoon, children laughing, a fashionista in bright red, 4-inch heels teetering carefully on the old cobblestoned walks.  A lazy, golden-haired dog lay on the pathway with eyes closed and tail thumping while the crowd carefully walked around him. We reckoned the smoke infused lungs and clothes were indeed worth it as we both agreed that the Querenca sausage and the local gastronomy were scrumptious. 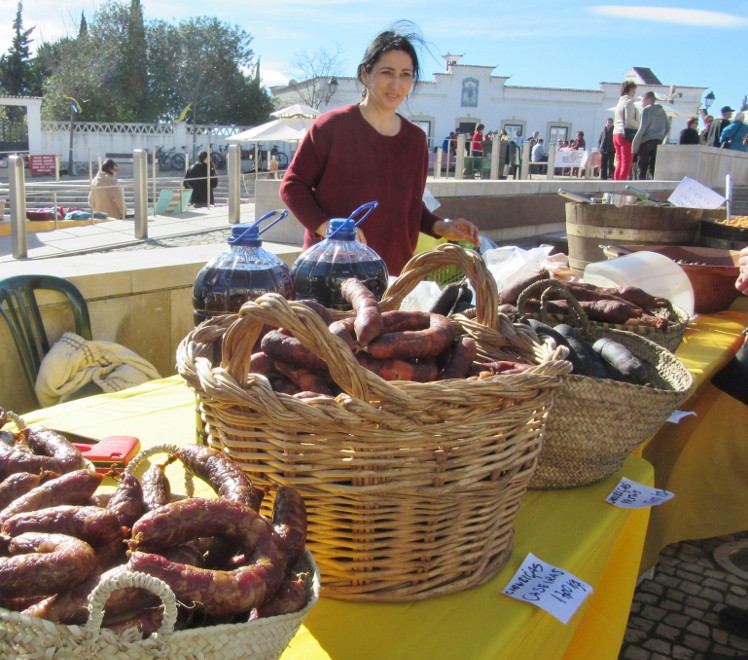 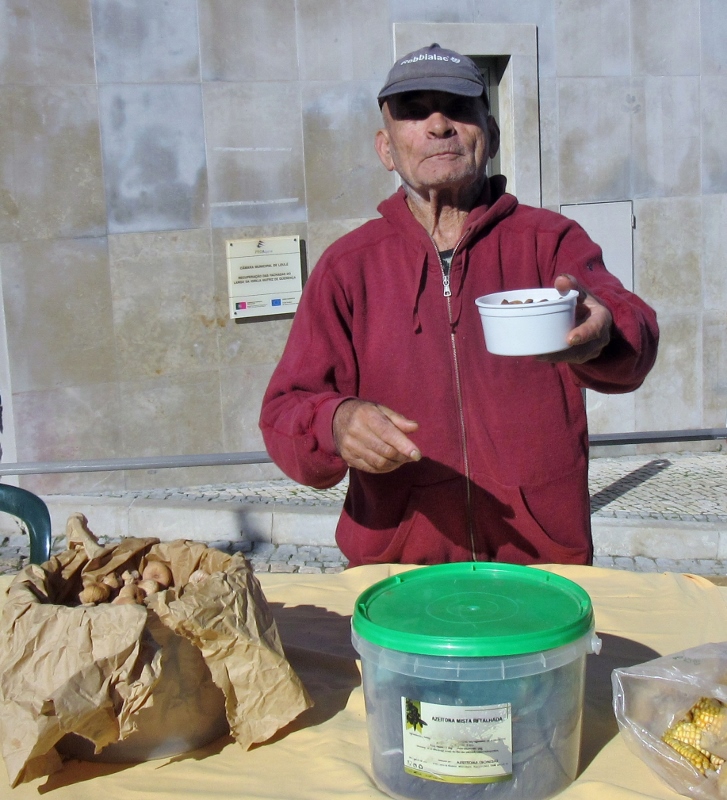 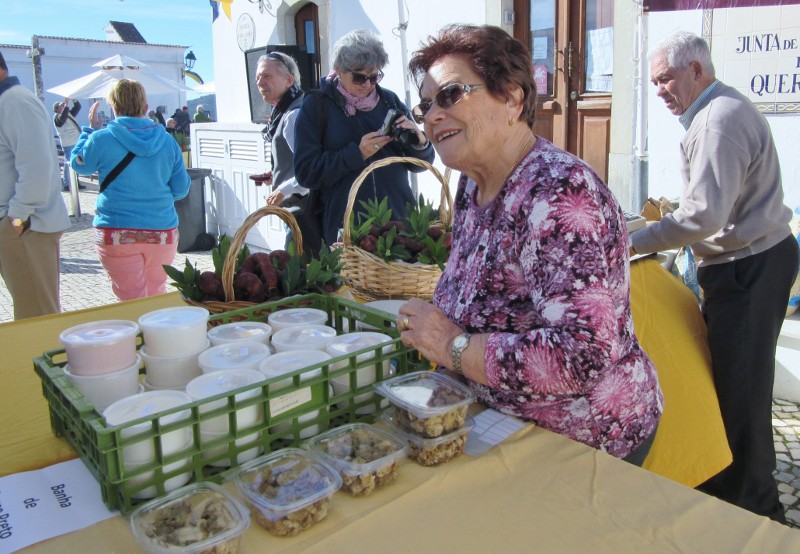 In the mid-afternoon people began to cluster in small groups in front of the picturesque church and before long a man carrying a banner emerged followed by the gold crowned statue of São Luís smiling benignly, carried upon a flower bedecked platform by men in short robes.  A small group of the faithful trailed behind the hoisted saint while we visitors clicked cameras and watched as they paraded at a slow, measured pace around the church.  The procession ended up back at the church doorway and then São Luís was tucked inside the church for another year. 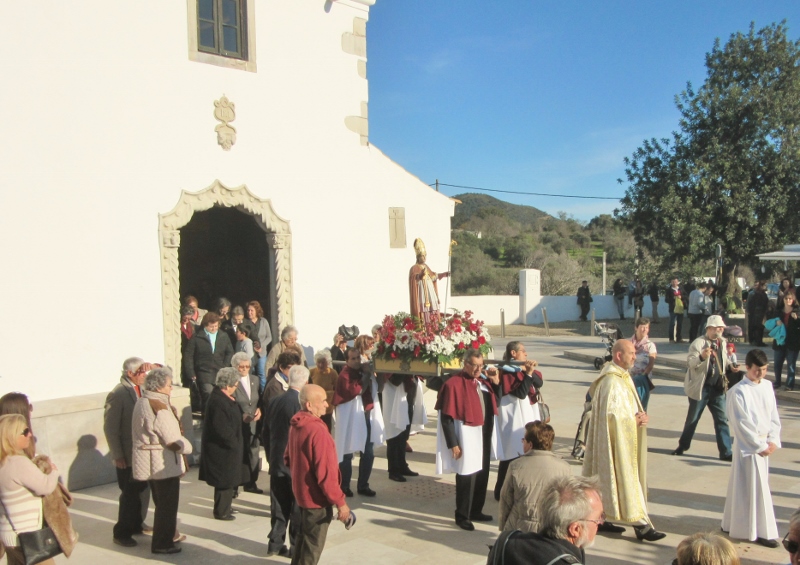 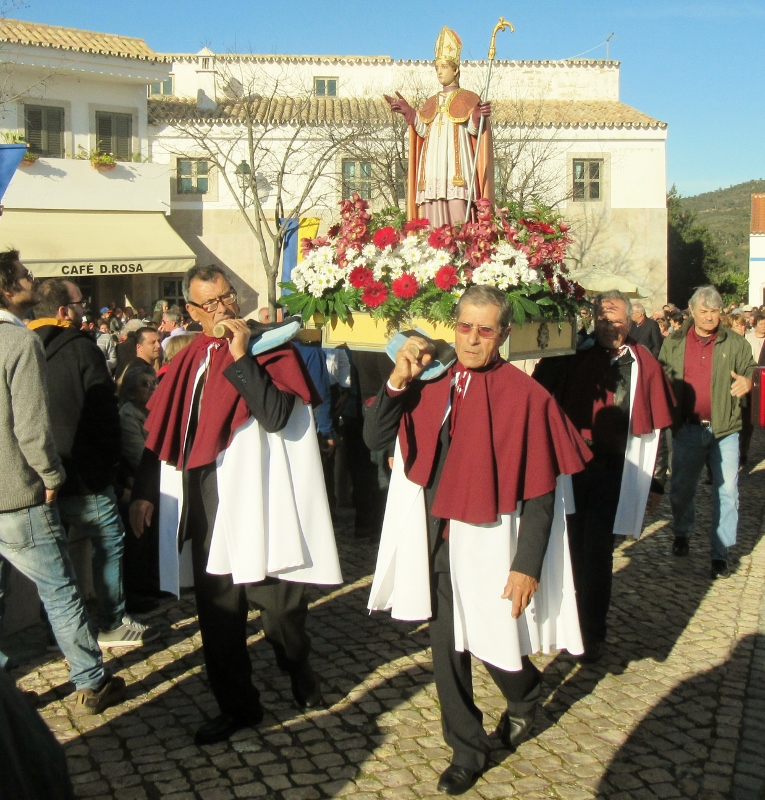 The afternoon was fading and even though musical performances, singing and dancing and fireworks were promised we decided not to brave the winding roads after dark and to make our way home.  We left the smoke and the quaint hamlet of Querenca behind.  But, in the back of our minds lingered the thought that Querenca’s Sausage Festival is only the first of many sausage festivals throughout the year in Portugal.  There were more good times and good eating ahead! 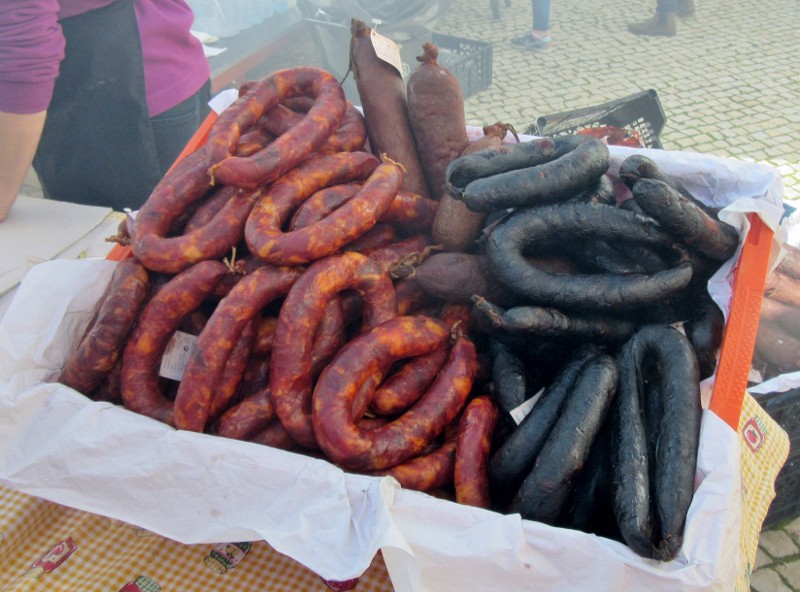