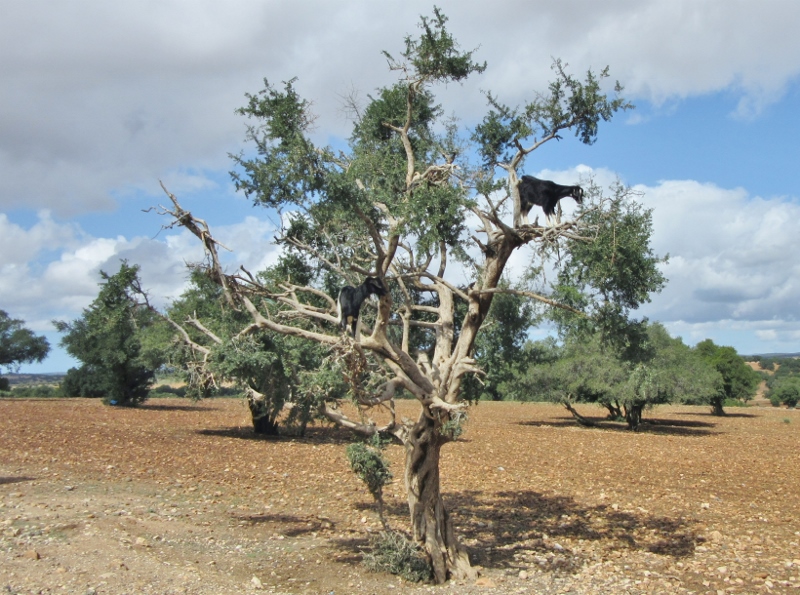 We were in an herbal shop in Fez, Morocco sipping sweet mint tea while the owner opened up jar after jar of medicaments and shook bags filled with loose herbs.  We sniffed and listened while he expounded upon the healing properties or cooking wonders that each provided and then he gestured us towards a corner where a couple of women sat roasting and cracking nuts with rocks.  To our shame we paid these hard-working women scant attention because we’d totally focused upon the poster behind them of a tree.  And not just any tree but one filled with goats, happily standing on the branches like oversized Christmas ornaments. 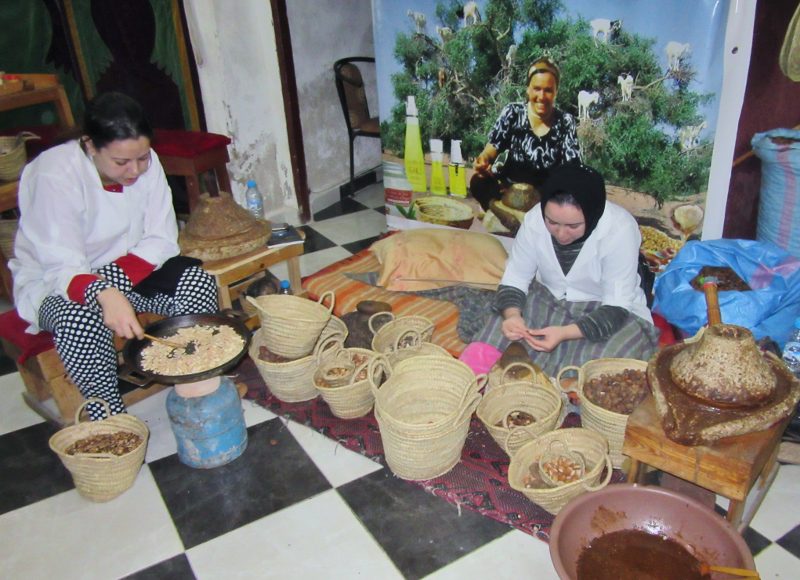 A few days and questions later, after a bit of online research and some money that crossed our driver’s palm, we were on our way to the area near Essaouira, about a two and a half-hour drive east from Marrakesh.  Besides being a name rich in vowels, the coastal city of Essaouira is a popular vacation area for European beachgoers and surfers with a rich history dating back to the Carthaginians and Berbers.  Surprisingly though, that was of little interest to us as we were on a mission that had to do with the argan trees and the tree climbing goats in the Sous Valley.  And this day trip would take us to the only place in the world where these trees are to be found, the reason why the southwestern region of Morocco became a UNESCO Biosphere Reserve in 1998.

Our drive led us through several, micro eco-systems, both artificial and manmade.  Leaving Marrakesh behind, we encountered crop lands of varying sizes. The majority were small family plots while others appeared to be mid-size fields of wealthier land-holders as well as some walled and guarded properties of seriously, major players or corporations. The signs of irrigation and intensive fertilization were abundant. Concrete aqueducts, modern spreaders and workers bent over hand weeding were only the most obvious. The vibrant greens of the abundant and healthy vegetable crops were the ultimate give away. 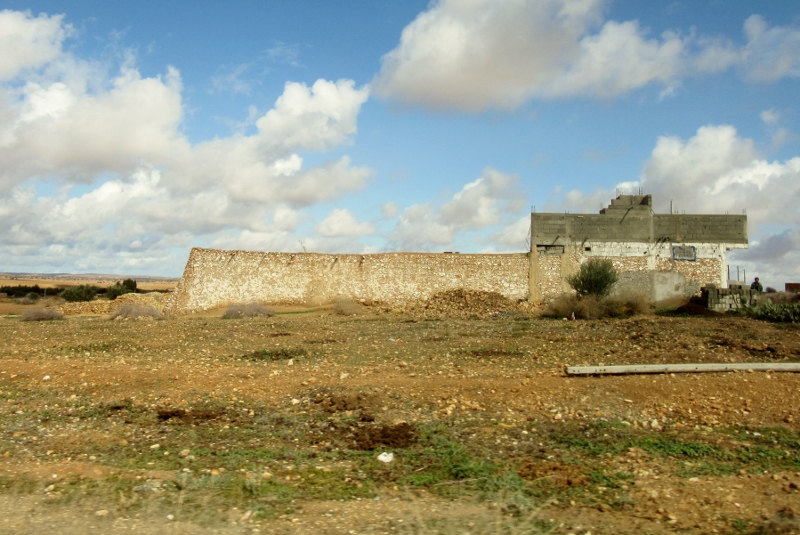 In short order this lush, verdant land gave way to what could have been called The Big Dry, where piles of rocks appeared to be the most abundant harvest. Our guide, Daoud, explained that Morocco was in the midst of a multi-year drought. There had been only two or three days of rain in the new year; totally insufficient to replenish the land. The effects of the previous years’ calamities stood in stark relief before us. Homes appeared to be abandoned in piecemeal fashion on both sides of the road. Crops were stunted or dead in the fields. Whole stretches of land were tilled but left unplanted. This was not land lying fallow; it was land farmers would not waste the seed upon, in plots destined to be barren because of the lack of moisture, a harbinger of want, hardship and destitution.

Then, climbing slightly in elevation, we crossed a ridge and descended into another landscape, the only place on earth where the fabled argan trees exist, the Sous Valley. Here in this hard-scrabble dirt grow the trees which for centuries have nourished the local Berber people who inhabit this land. 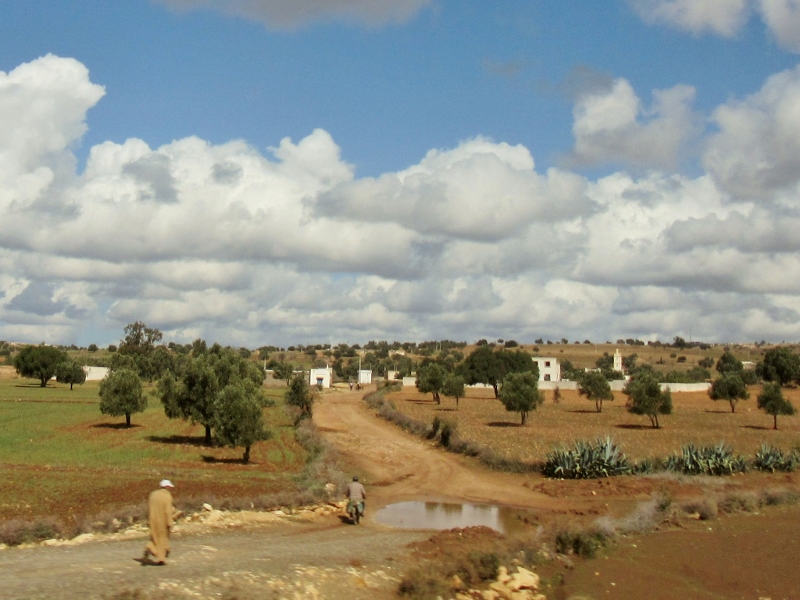 The argan tree (argania spinosa) grows up to 30 feet in height and lives up to 200 years. It is well adapted to its harsh environment with its widespread root system that allows it to retain moisture and withstand the temperature extremes providing an important defense against erosion and the encroachment of the Sahara Desert, to the immediate south. In a land where not much else grows, the argan tree with its thorny branches and twisted trunks has been used for centuries by the Berber as building material, fuel and food.  And in a splendid example of environmental adaptation, the hungry goats learned to climb the trees to eat the walnut-size, yellow-green fruit. 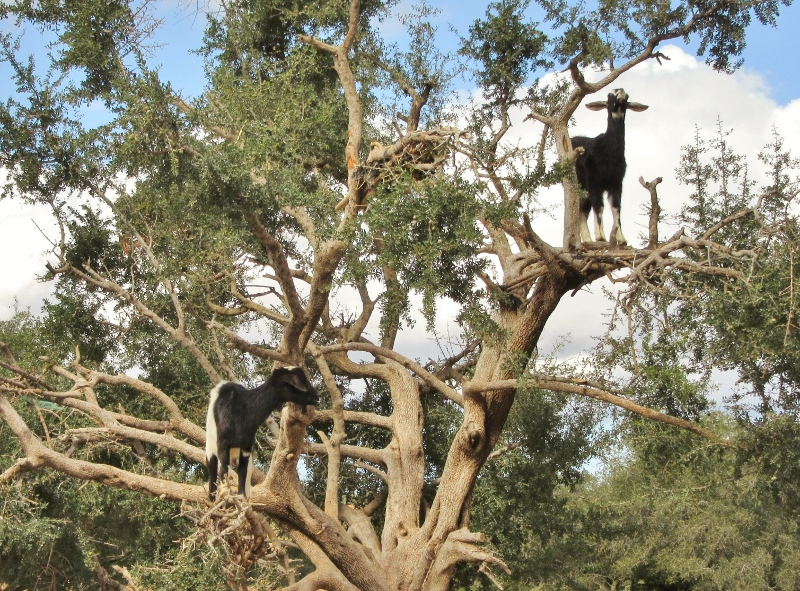 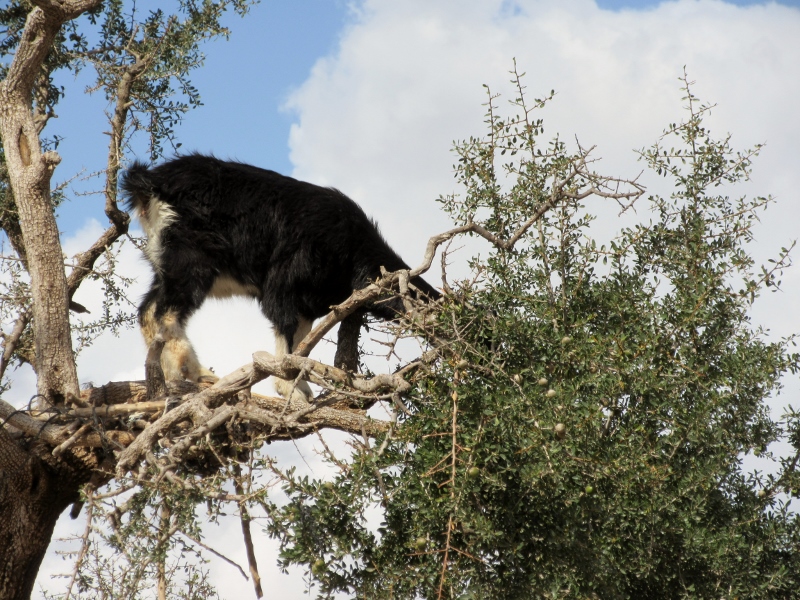 History does not record such prosaic events as to who went through the goat droppings and discovered the prize after the fruit passed through the goat’s digestive system.  Who wants to think about such things anyway?  (Okay, we confess, we do and we had several entertaining scenarios envisioned!)  The goats obviously provide the easiest and most efficient way to extract the highly valued kernel but workers can also dry the argan fruit and then remove the pulp or remove the flesh mechanically.

The tan colored nut that remains though, contains one to three oil rich argan seeds and when processed this is the reward which has sustained the Sous Valley Berber for generations. One of the rarest oils in the world, high in vitamin A, vitamin E and essential fatty acids, the extracted oil can be used either as food for humans (the nuts are roasted first to enhance the flavor) or as a medication to heal acne, psoriasis, eczema and inhibit scar tissue formation. It is also becoming increasingly well-known for its cosmetic and anti-aging properties. 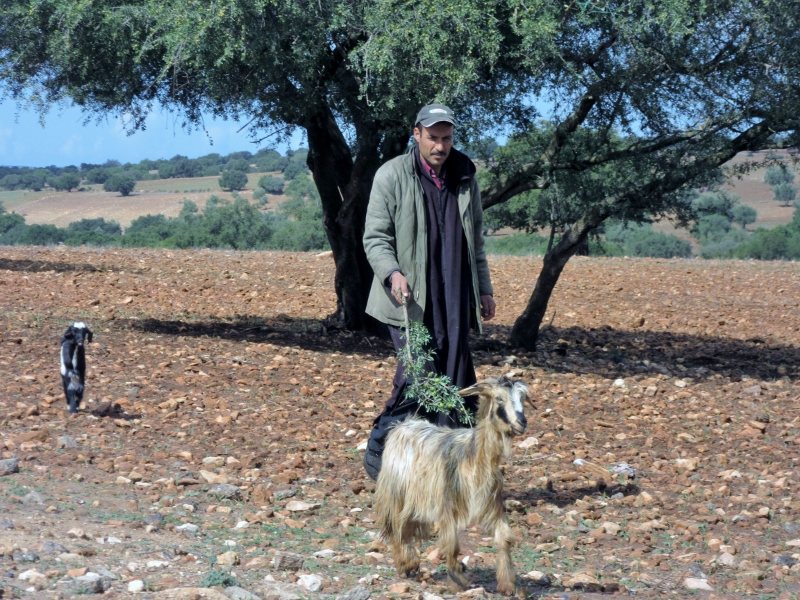 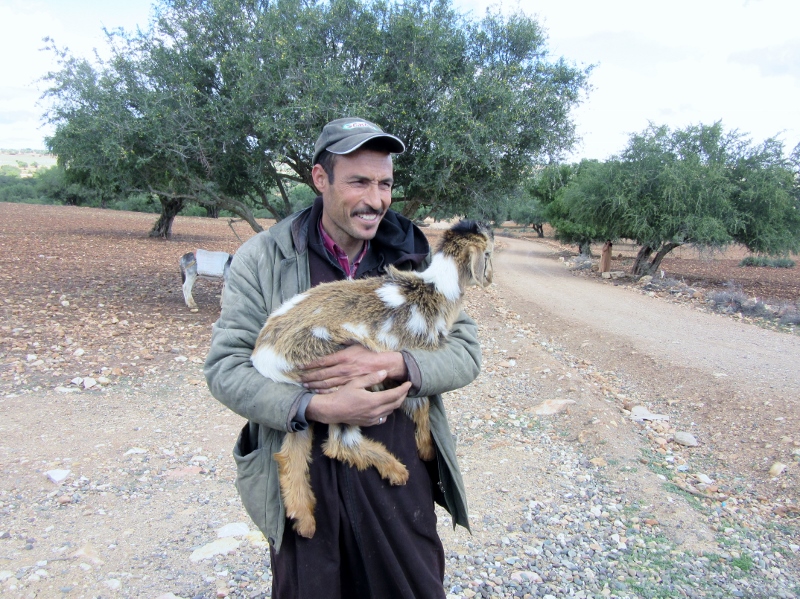 After watching the fabled tree-climbing goats and exchanging smiles with a goat tender who brought one of the long-haired creatures over to us to pet, we stopped by a small building on the side of the road, the La Cooperative Feminine Argan Majji, to learn how the oil is processed. 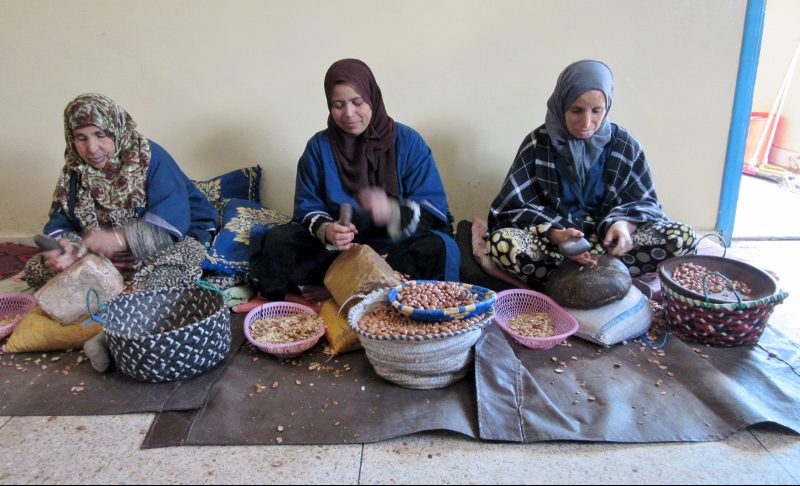 Following the removal of the fleshy pulp (by goat or other method) the women begin the labor intensive process to extract the oil. To get to the kernels, they crack the nut open the time-honored way, between two stones, with the leftover shells being gathered for later use as fuel for fires. This tedious work requires stamina, dexterity and finger protection for rocks are hard and fingers ain’t.  Argan nuts rank among the hardest nut in the world and this first stage of breaking them open is the most difficult part of the process. So far a machine hasn’t been developed that splits the nuts reliably and the traditional method, combined with the womens’ skills, remains the most effective way to get to the kernels. Once the kernels are extracted they can be crushed and pounded into a paste or fed into machines that pulverize, press and extract the valuable argan oil. The remains come out in long thin ropes of gray pulp that are fed back to the goats (an elegant cycle) for their second enjoyment of the argan fruit. 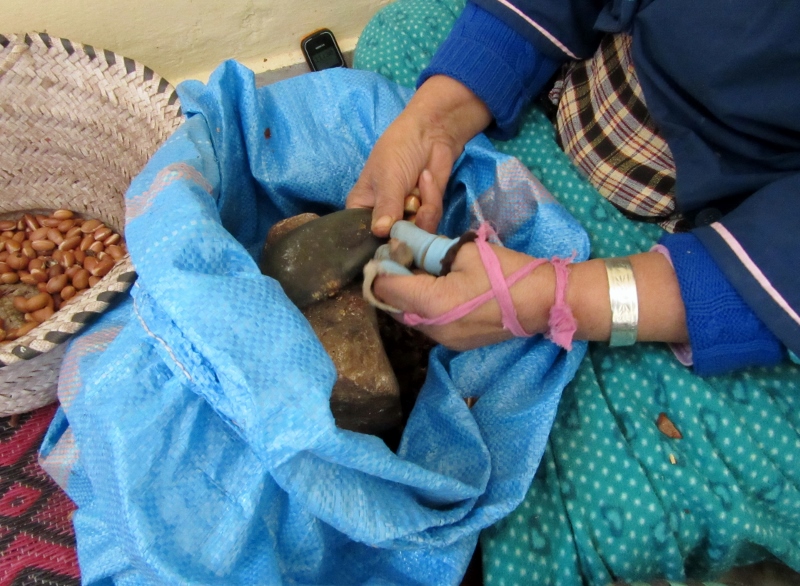 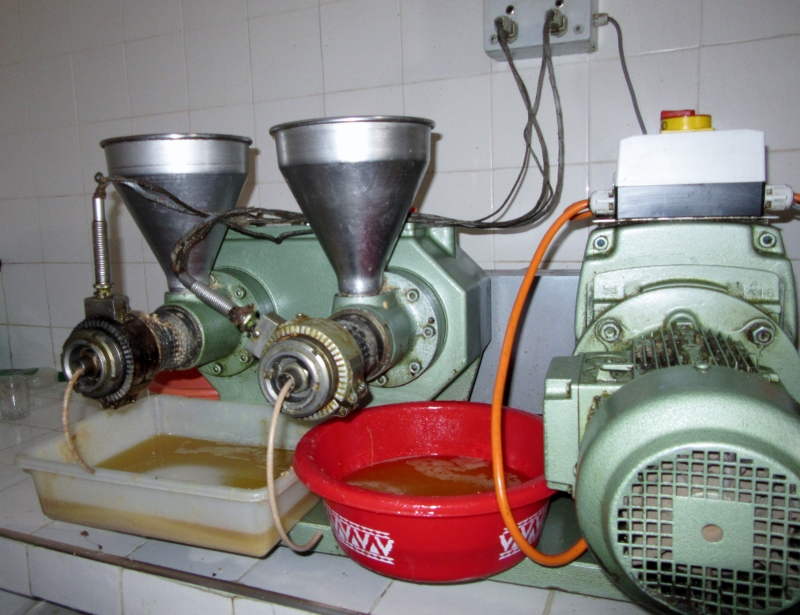 Much of the argan oil produced today comes from over fifty women’s argan oil cooperatives like La Cooperative Feminine Argan Majji that were first formed in the late 1990’s and operate under union protection. The work provides income which many of the women have used to educate themselves and their children, provide healthcare for their families and also gives them economic freedom in Morocco’s traditional society.  And, although the men’s part might be overshadowed by the success of the women’s co-ops, their role is equally important in tending the goats and argan trees, many of which are individually owned.  After all, goats are intelligent animals, but also greedy and rapacious creatures by nature, and need a goat herder to dissuade them from feasting upon other’s trees.

And when we left the Majji Co-operative to visit the coast before returning to Marrakesh we’d exchanged some Moroccan Durhams for a small bottle of oil, soaps and lotions.  We had a new-found appreciation of the argan trees, their valued oil and happy memories of seeing the tree-climbing goats of Morocco’s Sous Valley. 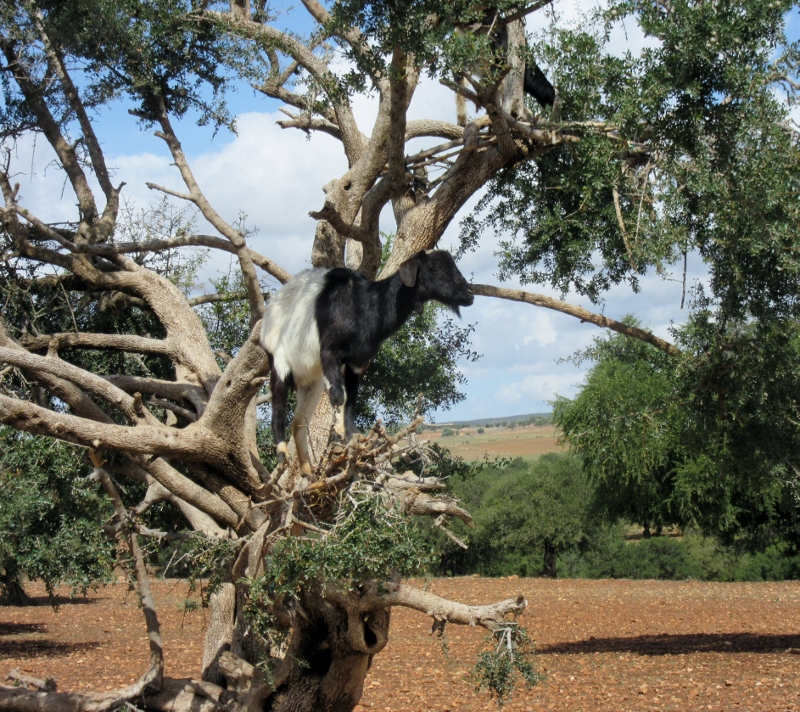 By Richard Nash and Anita Oliver