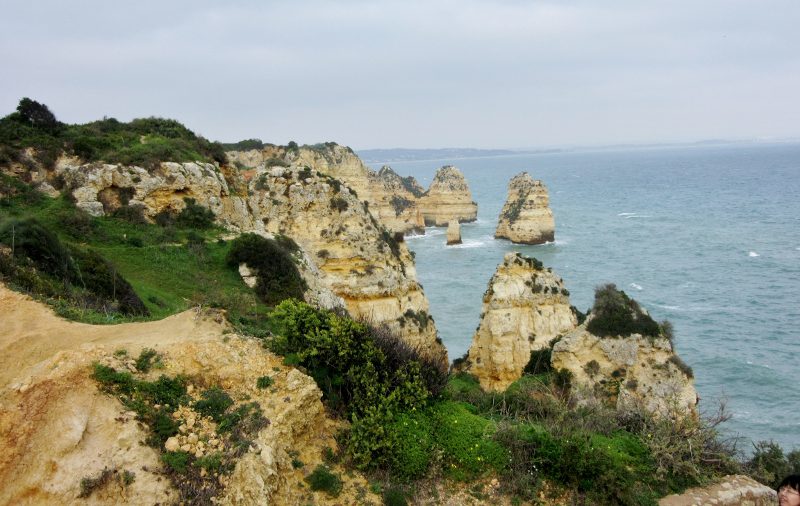 For longtime followers of our blog it should come as no surprise that we have a passion for travel and love delving into guide books, checking out Skyscanner for good deals while dreaming of exotic places and reading our favorite travel blogs for the thrill of a virtual armchair travel experience.  And even though we’d done a lot of reading about things to do and see in our own adopted town of Lagos, Portugal, it was quite by accident earlier this year that we happened upon what has become our favorite place here while driving around, following the different roads here and there.  A two-lane road led us west of the historical old town a couple of kilometers, skirting Lagos Bay along the coast and ending in an almost deserted parking lot with a small restaurant (closed for the winter) and a souvenir shop with a few offerings. The wind gusted across the promontory as we set off on a short path towards the yellow lighthouse (circa 1912) topped with a red lantern.  A sign told us that we had arrived at Ponta da Piedade which translates forlornly, for some long-lost reason that we couldn’t find, into “Point of Pity.” 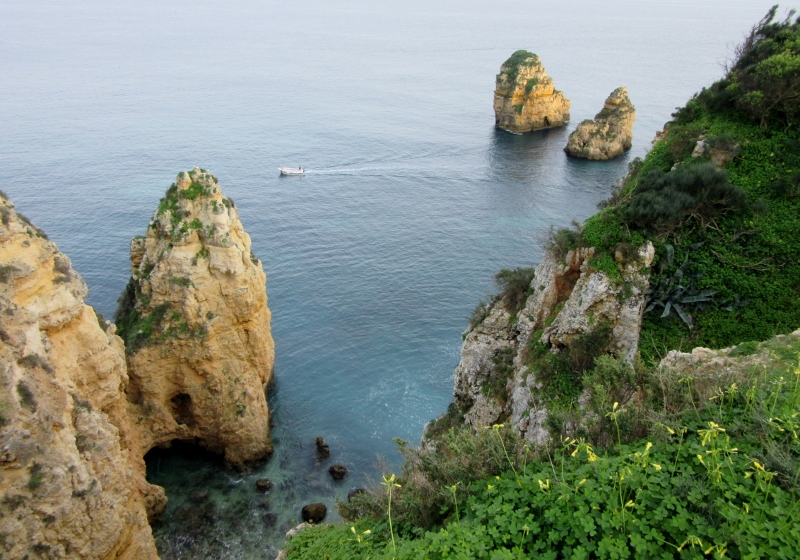 Probably the most astonishing thing for us as US expats, coming from a land where everything carries a warning of imminent danger, was the fact that only a tourist sign stood at the edge of the sixty-plus foot cliffs which stretched in both directions as far as we could see. Effectively, our safety was solely in our hands. Should we wander too close to the edge of these sedimentary rock faces, feel the earth crumble from under our feet and hurtle to our deaths, well, so be it.  And perhaps that’s the meaning of the name “Point of Pity.” 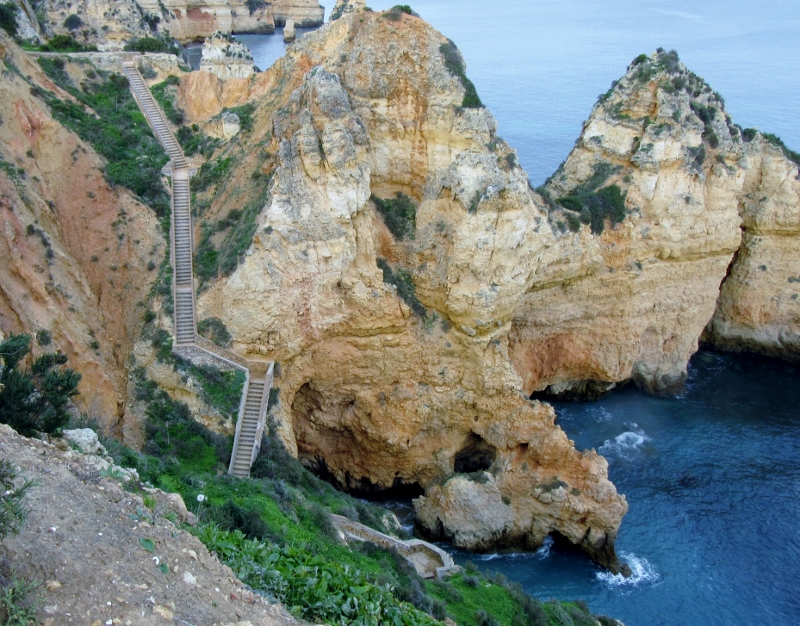 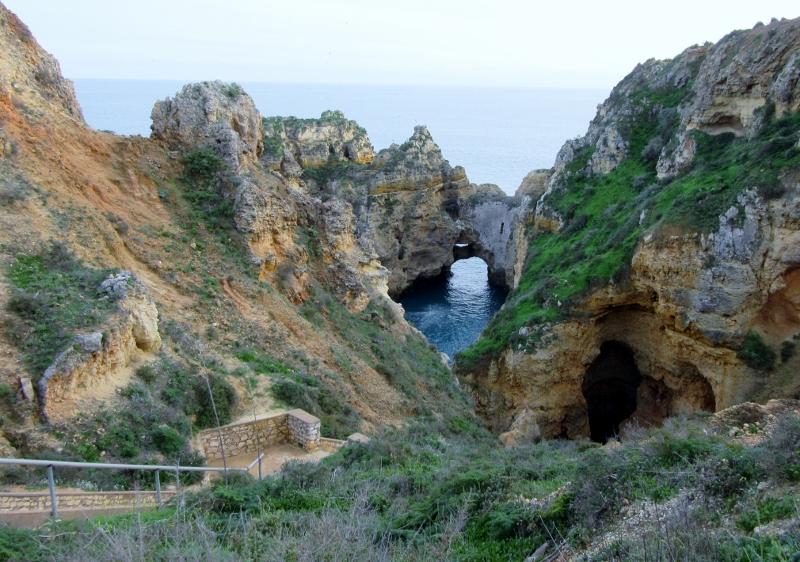 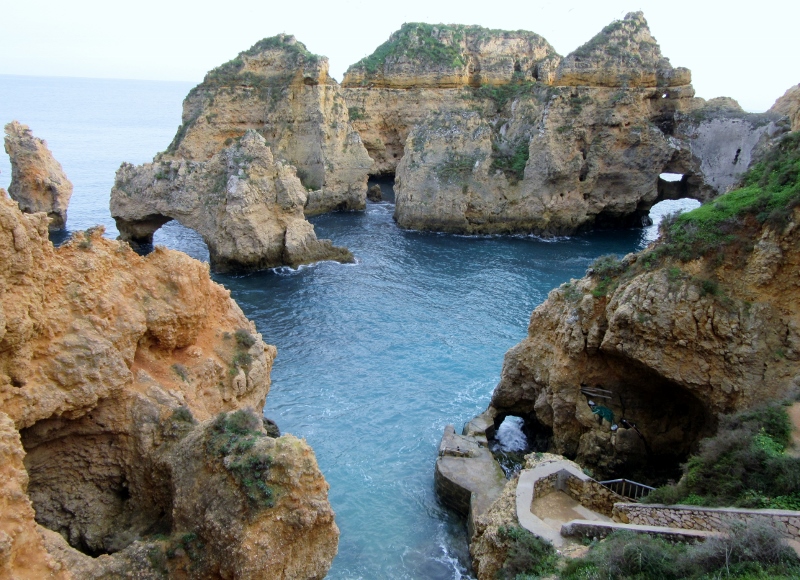 We followed the path alongside the cliffs for a bit, clutching our coats around us against the fierce winds, gazing at the dizzying views and watching the waves hurl themselves against the cliffs.  The chill chased us back to the stairs, all 182 of them, that wind down to the bottom of one of the most amazing natural monuments we’ve ever seen where the physical world has played its starring role as a sculptor for thousands of years.  Staring down and around and lastly up, as we descended, we kept saying “Wow” in hushed amazement and wonder at the fantastical setting of golden-hued arches, pillars and tunnels, grottoes and other huge, surreal rock formations in pyramidal shapes.  The waters’ shades varied from deep blues to turquoise and, with the gray sky and scudding clouds creating a backdrop, rivaled any cathedral we’ve seen. 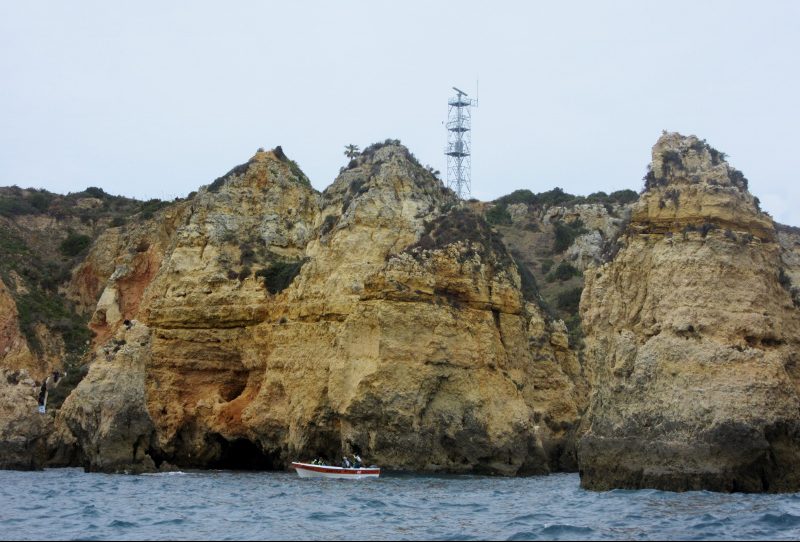 Since our initial visit we’ve made many return trips by ourselves when we’ve needed to add a bit of wonder to our lives.  We’ve also made it a point to include Ponta da Piedade as a highlight whenever we get a chance to play tour guides to old and new friends – a spoiler alert for those of you coming to visit us this summer!  But, despite several on land visits, it wasn’t until a few weeks ago that we actually took one of the numerous boat tours available with friends visiting from Nicaragua and saw what Huffpost calls “The most beautiful shoreline on earth” from another perspective. 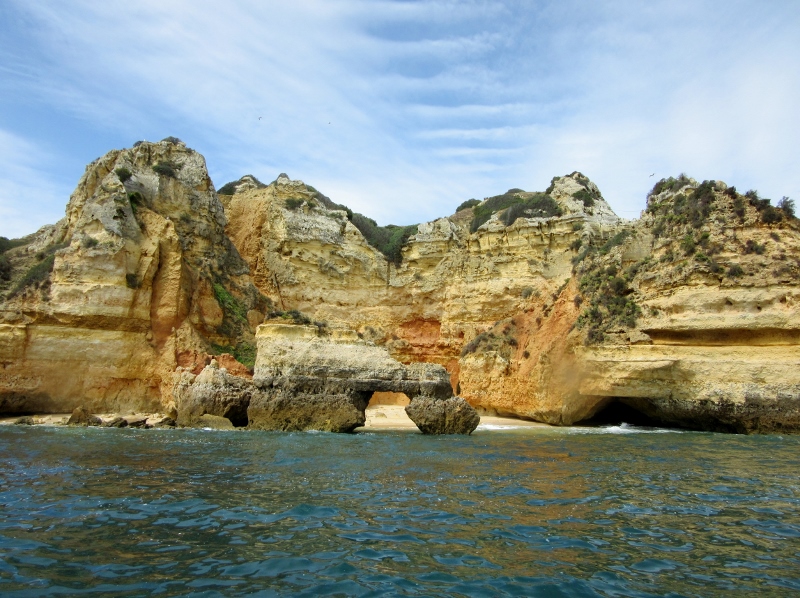 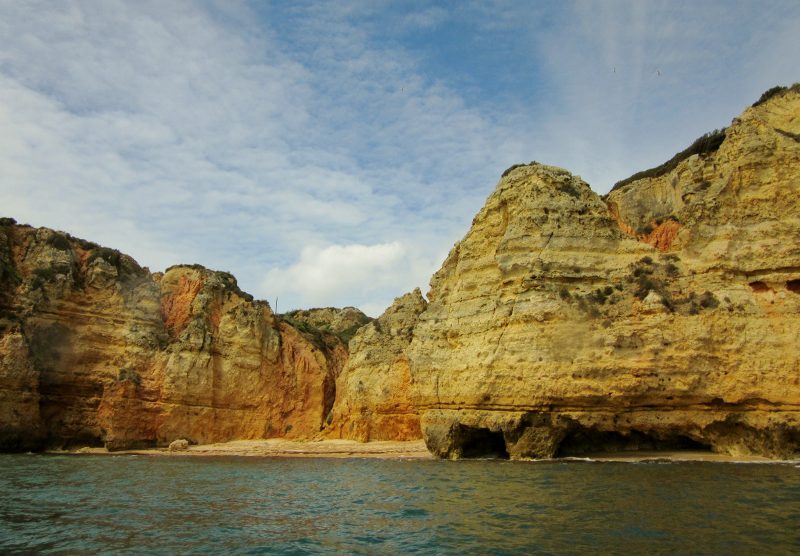 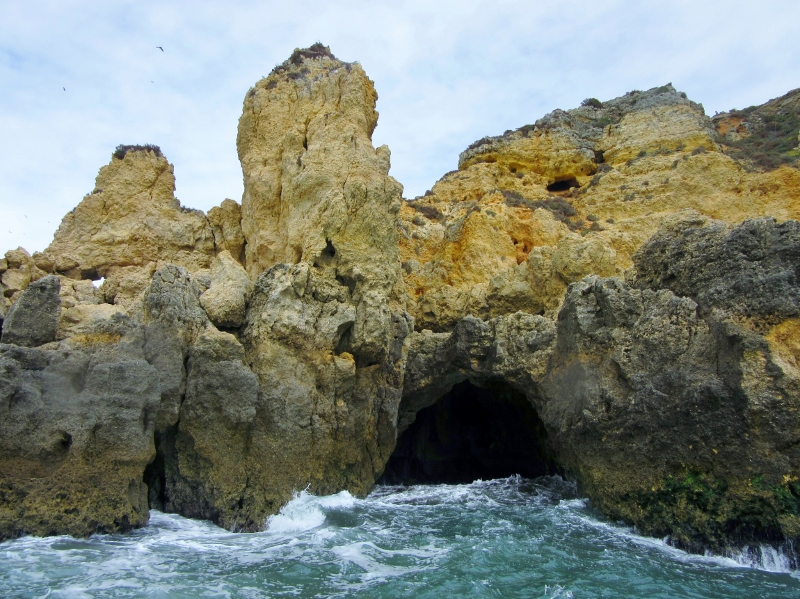 Since we stumbled upon the Ponta da Piedade on a winter day we’ve learned that many regard it as one the most magnificent features along the Algarve coastline and we can enthusiastically add our opinion to this thought.  And it’s yet another reason to add to our growing ode of “Things we love about Portugal” and why Lagos could well be the perfect place for us.

Note:  Boat trips are available from numerous companies in booths and tents that can be found along the walkways near the Lagos Marina.  We booked our two-hour trip with Dolphin Seafaris and the cost (low season) was 12.5 € per person.  Kayaks and stand-up paddle boards are also available for rent. 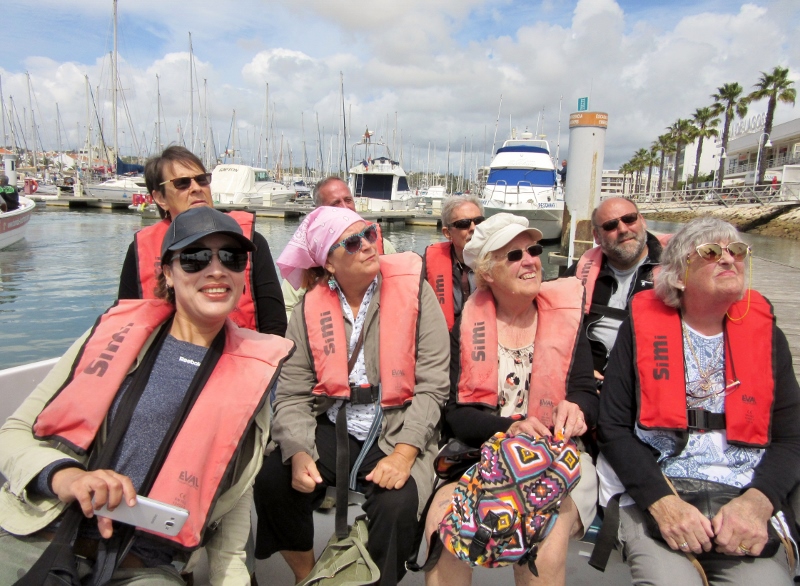 Once Was Enough: A Visit to Marrakesh 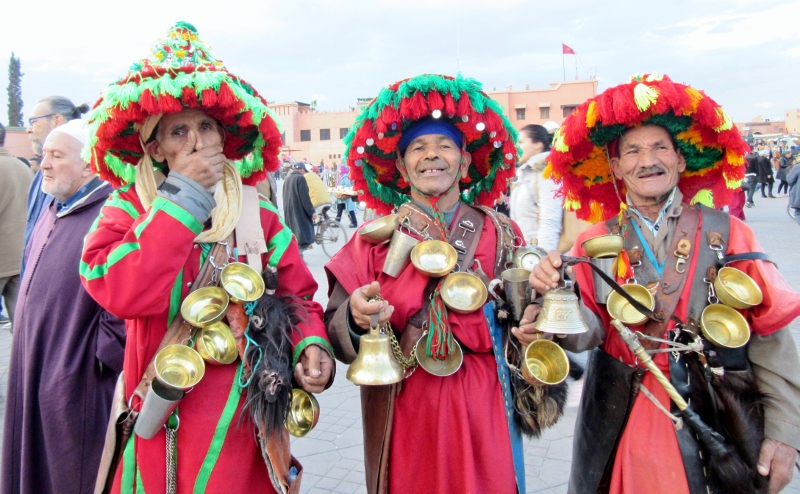 We took the train from Casablanca to Marrakesh. We gazed out the windows at the dusty, brown landscape, piles of trash here and there and shabby towns passing by and we talked about a song from the late sixties, Marrakesh Express, sung by Crosby, Stills and Nash.  For us, the city symbolized some of the spirit of the sixties and seventies, attracting rock bands like The Rolling Stones and The Beatles, celebrities and the wealthy from all over the world as well as the young and adventurous.  The city sings its siren song to travelers like us, older with many experiences behind us but still eager to explore its souks, gardens, ancient streets and history. 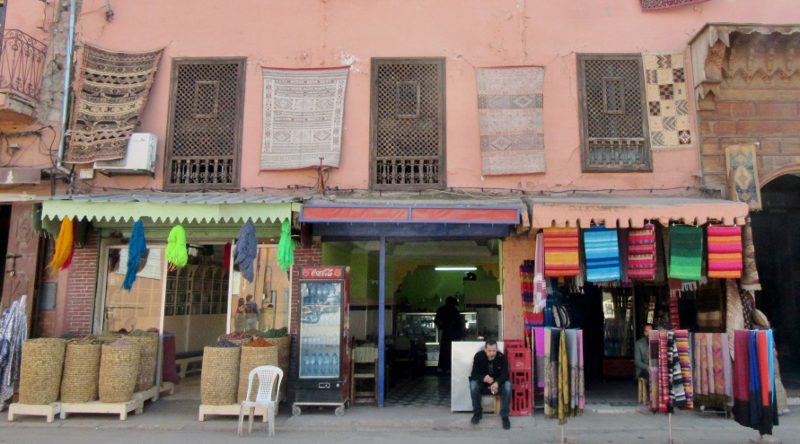 We climbed into a taxi and set off for our lodgings located within the Medina of Marrakesh, the older, walled portion of the city and a UNESCO World Heritage Site. Like Fez and Casablanca, the streets were teeming with people in western and traditional dress sharing the thoroughfares with bicycles, scooters and motorcycles, trucks, mules, horses and carts.  Here and there we spied some of the many scruffy cats that slink about the streets, lingering occasionally to enjoy a bit of sun.  Our attention was drawn to two mules, hitched together alongside the road and a man beating one frantically with a stick who had his teeth sunk into the neck of the other.  And then, in an unexpectedly shocking act of violence the man picked up a large rock and hit the offending mule savagely in the head.  Shaken and a bit sickened by what we’d seen we continued on, our anticipatory moods subdued by the event. 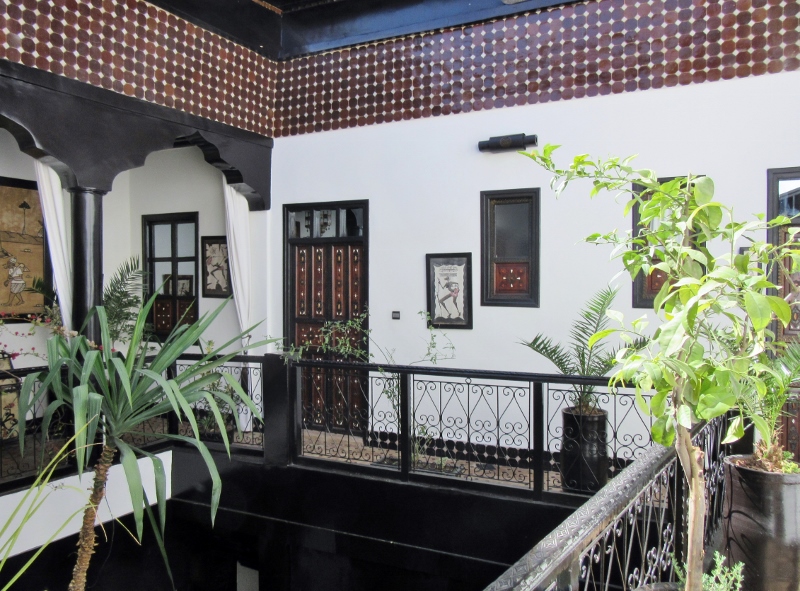 For our living arrangements we had selected the Dar Najat, a traditional hotel, featured on Trip Advisor.  A dar is similar to a riad in that it is a three to four-story residence organized around a central courtyard but it lacks the interior garden and fountain. Our host, an energetic and dreadlocked young man with a wide, welcoming smile showed us to our small but clean room with rock hard beds and vividly colored bedspreads and pillows. The vibe was most definitely young and hip (in fact, we got the feeling that a joint or chunk of hash could be ours for the asking) but we felt comfortable and joined the few other travelers on the roof top dining and lounging area.  During our stay, we started each morning with a vast assortment of Moroccan pastries, eggs, freshly squeezed orange juice and bitter, strong coffee to fuel our adventures. 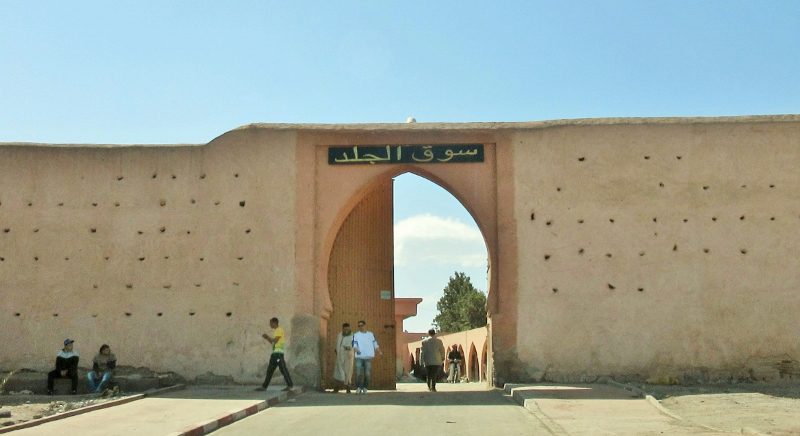 Today, Marrakesh is a huge draw for tourists all over the world and consists of its old city, the Medina, fortified by the (not so) red sandstone wall which gave it the nickname, “The Red City” and is surrounded by modern neighborhoods.  However, it should be kept in mind that it is one of the world’s most important trading centers, stretching from antiquity to the present day drawing merchants and buyers from the Maghreb (all of North Africa west of Egypt), Sub-Saharan Africa and, most recently, Europe. One of Morocco’s four former imperial cities built by the Berber empire, its history stretches back over a thousand years to its founding in 1017; a city that has survived feasts and famines, plagues, anarchy, the plotting of feudal lords, military coups and political intrigues. 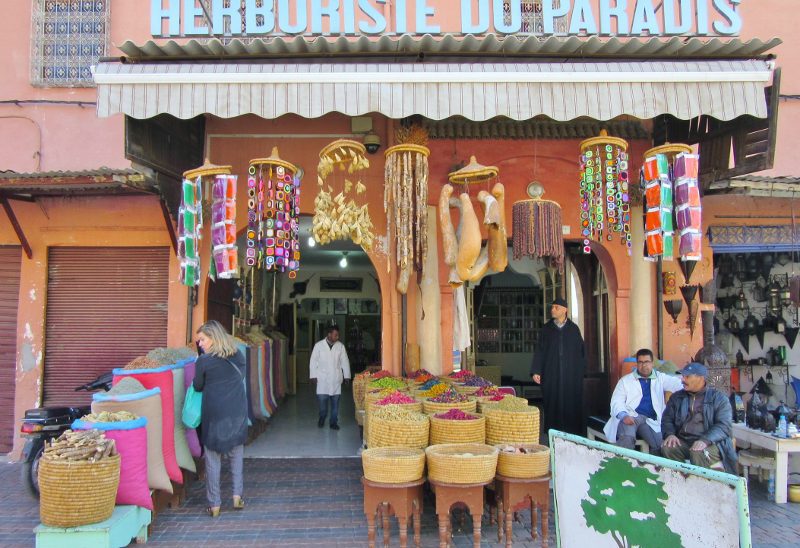 We spent a couple of memorable days in the company of our driver, Taoufiq, who showed up our first morning at Dar Najat promptly at 9 to collect us and walk us the short distance from the Medina to the square where his van was parked. His older brother Daoud, an erudite and well-spoken gentleman, accompanied us and shared the history of this fascinating city.  The following are some of our favorites:

In 2015 Marrakesh was named by Trip Advisor as its most popular travel destination in the world.  That fact alone should have served as a warning to avoid the city…  While we enjoyed much of our time there we found that we were also uncomfortable many times with the repeated demands for money and pestering to sell us goods in which we had no interest.  At the end of our third day in Marrakesh a full moon hung low in the sky and we boarded a night train heading back to Tangier and home to Portugal.