Looking For America: Thoughts on our Travels and Black History Month

We’re not special.  However, we won the birth lottery by being born in a rich, western country.  And, dare we state the obvious, we won the lottery again by being born white in the US.  With no apparent barriers in our way and a little native intelligence, we reached out for the opportunities afforded by having university educations and grabbed our piece of the American dream.  We never critically questioned our privilege.

Several months ago, in September of 2016, we returned to the US for a short visit and once again, became tourists in our own country.  Against the backdrop of the divisiveness of the US election where race, religion, gender equality, basic healthcare and immigration status had become massive issues of contention, we explored for ourselves what it meant to be citizens of the US.

One of our first stops was in Gettysburg, Pennsylvania to visit the Civil War battlefield where thousands of men died fighting for conflicting ideologies: State’s rights versus Federal rights, slavery versus abolitionism and a rural, southern society versus the social disruption the north was experiencing with the spread of manufacturing, commerce and the industrial revolution. 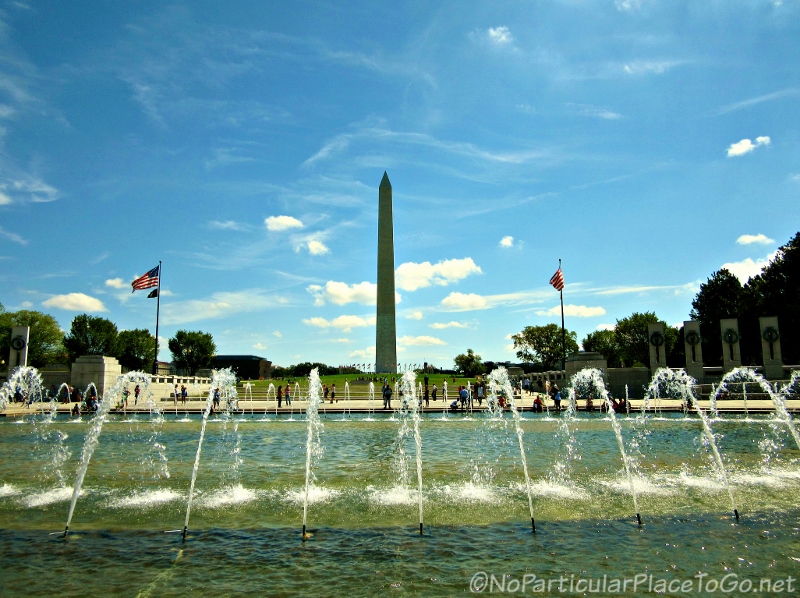 We moved on to Washington D.C, one of our favorite cities and spent a day on the National Mall, walking past the almost finished National Museum of African-American History and Culture, returning to those monuments honoring the men and women who have served our country and many times made the ultimate sacrifice.  This was also our first visit to the Martin Luther King, Jr. Memorial, located on the west bank of the Tidal Basin not too far from the Lincoln Memorial on whose steps Dr. King gave his “I Have a Dream” speech where he visualized an end to racial inequality.

Just a few steps away is the Franklin Delano Roosevelt Memorial, one of our favorites, a four-room outdoor monument commemorating each of his four terms. Perhaps because of its proximity to Martin Luther King Jr.’s memorial, one of FDR’s quotes seemed to have a special meaning. 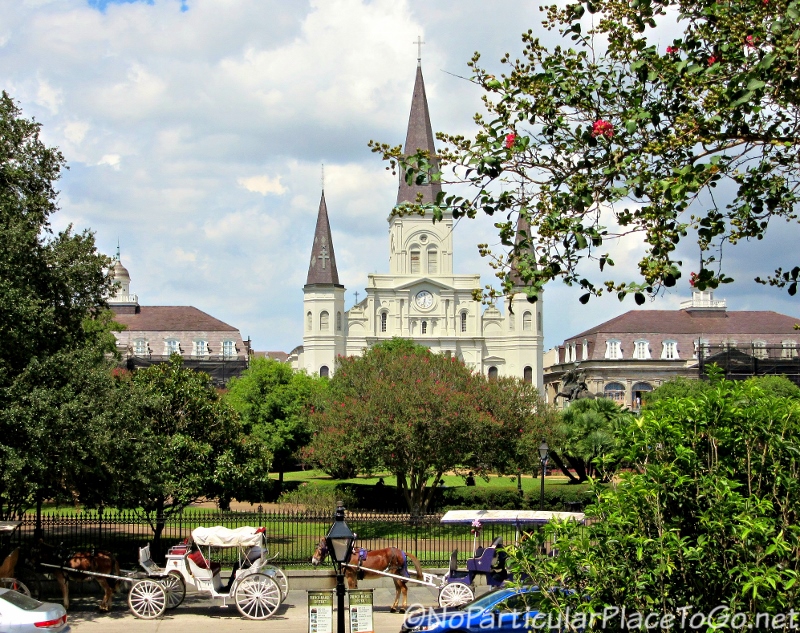 We drove from Georgia to spend a few days in New Orleans, Louisiana, another first-time visit for us in this city renowned for its French and Spanish Creole architecture, music and food.  The city’s graciousness contrasted sharply with its 19th century history as the largest slave market where more than 700,000 slaves brought to the Deep South arrived via the “forced migration of the domestic slave trade.”  Here we saw, too, where race and deep poverty played a part in 2005 in determining who escaped Hurricane Katrina – one of the deadliest hurricanes in the history of the United States – who lived through the disaster that reduced the city to a desperate, hellish nightmare and who perished. Since we were living on Padre Island off the Texas Coast at that time, we remembered watching as the tragedy played out on the news, questioning if this was really happening in “our” America. 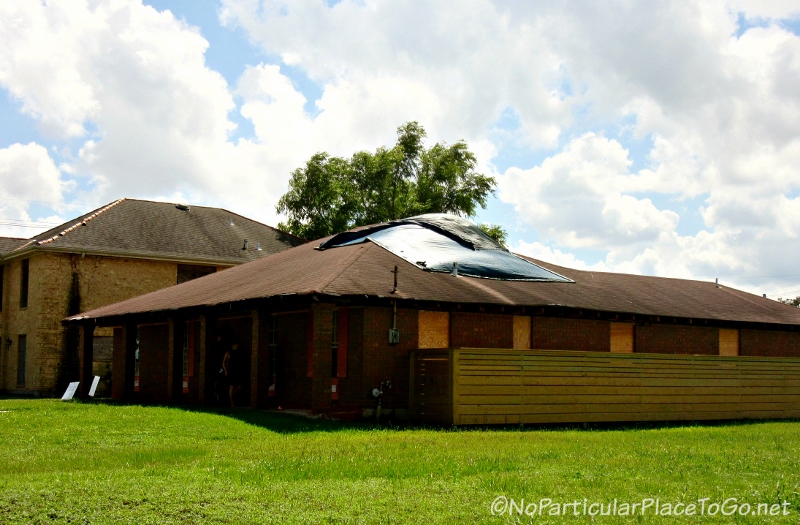 Spending a couple of days in Natchez, Mississippi, we visited a few of the magnificent Antebellum homes, spared from the Civil War and preserved with loving care.  Before the war, Natchez boasted it had the most millionaires per capita of any city in the US.  And yet, here again we were reminded that these houses and great fortunes originated from growing sugarcane and cotton using slave labor.  Here we also learned that Natchez had been home to the second largest slave market before the civil war.

From the Vicksburg National Military Park, another Civil War Battlefield honoring those who fought and died, we made our way to Selma, Alabama.  We arrived in the small and dusty town of less than 21,000 on a September afternoon that had us wilting with the temperature hovering at almost 100 degrees.  Evidently the heat had driven everyone inside because, except for our car and a very few others, the streets were deserted. However, in our imaginations, Selma had attained an almost mythical status because of the Selma to Montgomery marches.  Here was where “Bloody Sunday” occurred on March 7th, 1965, when John Robert Lewis, now a U.S. Representative from Atlanta, Georgia, led a group of six-hundred marchers across the Edmund Pettus Bridge, en route to Montgomery.  Blocked by local police and Alabama State troopers, they were ordered to turn around, beaten with clubs and tear gassed with over fifty people requiring hospitalization.  Civil rights activists poured into Selma and Martin Luther King Jr. attempted a second march on March 9th. Finally, on March 29th, after receiving federal protection, Dr. King led a group of 10,000 marchers from Selma.  By the time they reached Montgomery five days later, the marchers had grown to over 30,000 people, black and white and representing many faiths. 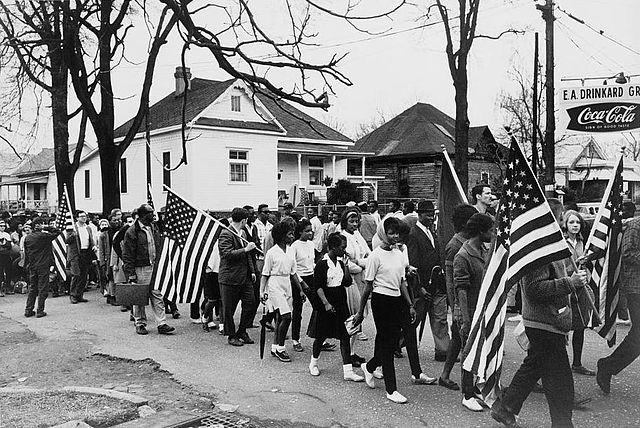 Our last destination took us from Selma to Montgomery, Alabama, only an hour by car.  Arriving on a Saturday, the downtown area streets looked all but abandoned and, again, the late September heat was smothering.  We paid our respects to the “Mother of the Civil Rights Movement” inside the Rosa Parks Library and Museum. Rosa Park’s arrest in December of 1955 for refusing to give up her bus seat to a white passenger inspired a 381-day bus boycott in Montgomery and ended with the U.S. Supreme Court ruling that segregation on public buses is unconstitutional.  Possibly even more thought-provoking than this museum was our visit to the nearby Southern Poverty Law Center. The Civil Rights Memorial, outside the center, is a black granite memorial inscribed with the names of forty-one Americans who died between 1954, the year the U.S. Supreme Court ruled that racial segregation in schools was unlawful, and 1968, the year Martin Luther King was assassinated.  Inside the building, a timeline of the Civil Rights Movement explains the events that occurred and honors those who gave their lives.  At the end of our tour, deeply moved, we were given the opportunity to add our names to the “Wall of Tolerance” where we pledged that we too, would work for the same ideals of justice, equality, and human rights.

Our road trip in the US a few months ago gave us a chance, again, to learn and reflect more about our country and ourselves.  In the past, our country has honored multiculturalism and diversity while straddling a divide that threatens to grow wider each day. As bleak as it seems however, there is much to celebrate and many reasons to remain hopeful.  The US’s own Civil Rights Movement continues to provide inspiration for those who seek justice today as well as sanctuary.  And it’s becoming more and more evident that there are thousands willing to take up their banners and march.