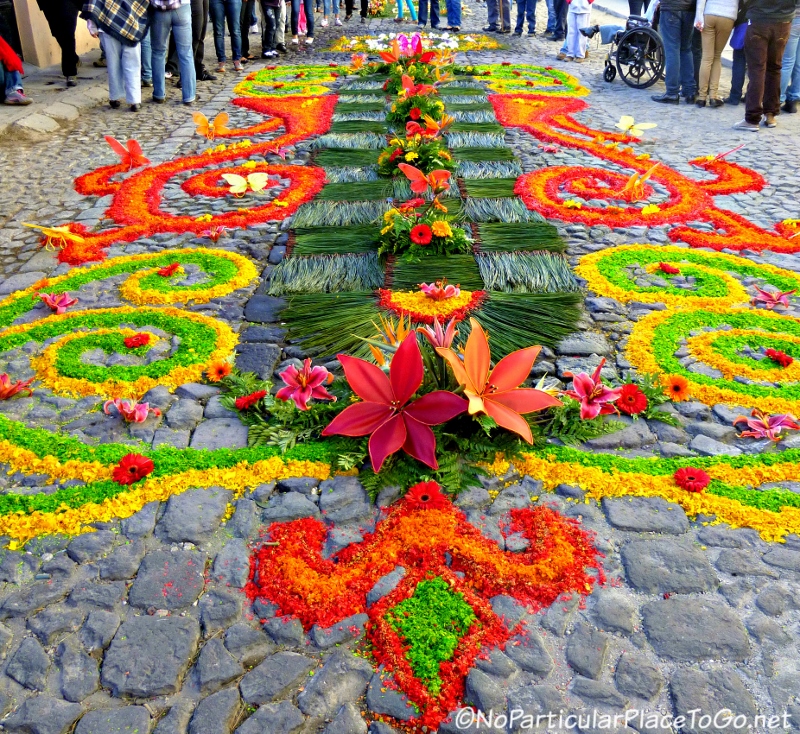 We say this often, but so much of travel is about serendipity, where timing and seasonal events can play a big part in the travel experience. Since we don’t usually pay much attention to religious holidays, we recently missed seeing one of Portugal’s best Carnival celebrations in a nearby town for the second year in a row. And Lent, the weeks that come after the just-for-family daytime parades and the not-so-family night-time, raucous revelry of Carnival, is a time that usually passes by us completely ignored. Followed by many western churches, these six weeks are a solemn religious observance of penitence and self-denial (pastimes that we avoid) beginning on Ash Wednesday and culminating with Easter Sunday.  And no one in the world celebrates Lent and Holy Week (Semana Santa) quite like Antigua, Guatemala, where we arrived, quite by chance, during the Lenten period in March of 2013.

We could sing out-of-tune odes to Antigua, a beautiful little city flanked by three volcanoes of approximately 46,000 people in the mountains of southern Guatemala.  A UNESCO World Heritage Site, Antigua was founded in 1524 by the Spanish conquistadors who arrived in Guatemala from nearby Mexico. The Dominican priests who followed brought along their Lenten and Easter traditions from Seville, Spain, including the Alfombras, the “Christ Floats” and the processions.  Some 500 years from their introduction to the Guatemalan faithful, Antiqua’s Holy Week celebrations have become the largest in the world, with a unique fervor and devotion. Each Sunday during Lent found us waking up to our alarm clocks and setting out to walk Antigua’s streets well before daybreak in search of that day’s Alfombras and procession.

Antigua is famous for its Alfombras (Spanish for carpets) and it was easy to see the route the day’s procession would take as the Alfombras mapped the way, laid out on the cobblestone streets in front of the family homes or businesses.  Made from dyed sawdust in a variety of sizes and shapes, stenciled patterns and free-form designs, most were decorated with an assortment of flowers including bougainvillea, bird-of-paradise, chrysanthemums, carnations and roses.

Here and there we’d see fruits and vegetables in a carefully designed pattern as well as glossy, green, pine needles added as further embellishments.

Many families save all year to create their Alfombras using one-of-a-kind stencils and designs passed down from year to year, many through generations.  The creation of the Alfombras begins the day before the parade and combines hours of tedious work along with a family celebration.  Often, the carpets are completed only shortly before the procession arrives. 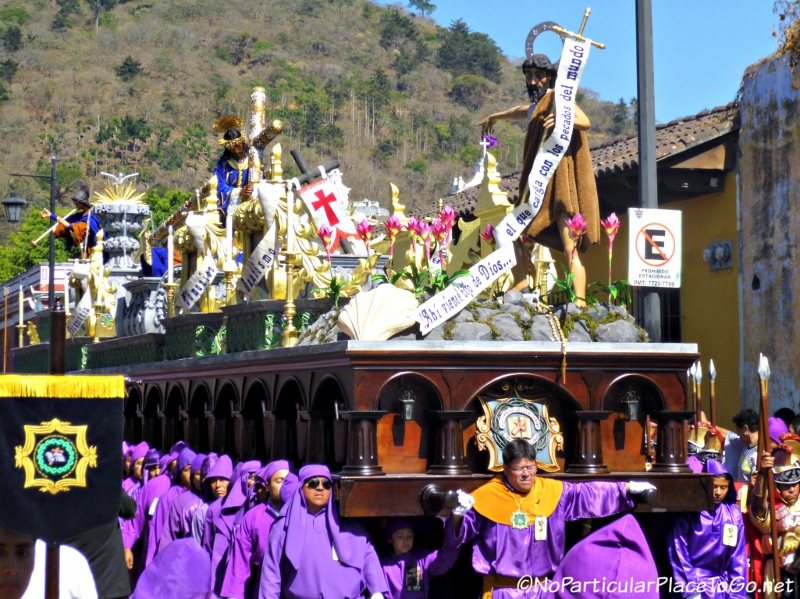 The parades are organized by different brotherhoods affiliated with neighborhood churches and each procession begins at that church. In colonial times, the “Christ Floats,” featuring figures of Jesus Christ arranged in biblical tableaus on a wooden platform called an andas, were quite small and were carried on the shoulders of twelve devotees.  Now, as the tradition has gradually evolved into lengthy pageantries of religious fervor, many of the andases are massive. The combined weight of both the elaborately carved wooden platform and religious statues can weigh several tons with the largest requiring up to 100 carriers. It’s an honor for penitents, who come from all over Latin America and pay for the privilege, to carry the andas. The carriers rotate their turns in and out often at the end of each block as the effort to carry the massive andas demands both endurance and strength as they journey through Antigua’s narrow streets for hours.

The streets are crowded with men wearing robes of Lenten purple (Cucuruchos) and black-clad women (Cargadoras) awaiting their turns to carry the load.  It’s wasn’t hard for us to imagine a beaten Jesus Christ staggering along the streets with his cross as we watched the faithful voluntarily carrying the andas.

We’d hear the mournful music from the bands playing traditional Guatemalan compositions well before the procession would appear, which gave us time to stake out a place on the sidewalk corner where we’d get a good view of the participants.

A purple-robed man would appear, amid a cloud of fragrant (and choking) incense, swinging a metal censer suspended from chains.  The carriers of the first float would step upon the alfombra to walk its length, followed by the rest of the solemn marchers in the procession. The bands with tubas, French horns, clarinets and drums, would follow and, at the end, the trampled Alfombras would emerge as mounds of sawdust and debris.

The street sweepers were the sad finale of each procession and half an hour after the procession passed, there’d be nothing remaining of the glorious Alfombras.

Holy week (Semana Santa) takes Antigua’s Lenten celebrations to a whole new level as people from all over the world crowd into the city.  (The estimate for 2016’s crowds during Semana Santa was 1.2 million people.)  Beginning on Palm Sunday, the Alfombras become even larger and more elaborate as their creators work through the night to complete them. The parades are each more spectacular than the last, with costumed Romans and Centurions astride horses. Hundreds of purple-robed men and black-clad women mingle with the crowds of spectators. A Passion Play on Friday culminates with a huge procession and the massive andas bearing Christ carrying his crucifix moves slowly about Antigua’s streets throughout the morning.  And then a lull for a few hours.

The bands begin to play slow and mournful dirges and the funeral processions appear carrying the body of Christ encased in glass upon a platform.  The Virgin Mary, splendidly attired but mournful, appears amid the Stations of the Cross and commemorations of all her moments of sorrow at the death of her son.  Everyone is clad in a somber black with the women wearing veils or mantillas.  The censers spew out choking clouds of sweet incense that hangs in the streets and the mood is as solemn as though the crucifixion had just occurred rather than happening over 2,000 years ago.

For us, Easter was almost a let-down with hastily assembled Alfombras, a small procession with the resurrected Christ and firecrackers that went off throughout the day. As non-believers and non-Catholics, we’d spent several weeks immersing ourselves in the Easter traditions of La Antigua and the artistry of her Alfombras, Christ Floats and centuries-old Lenten processions.  We fell in love with the city during the Lenten processions and stayed several months longer in Guatemala than we’d originally planned, exploring the country from coast to coast but Antigua’s Lenten and Semana Santa celebrations and traditions remain among our favorite memories of this country. Firmly rooted in the twenty-first century, cynical and lacking any vestiges of religious ideology ourselves, it was never-the-less tremendously moving to see faith and devotion so openly portrayed in La Antigua. 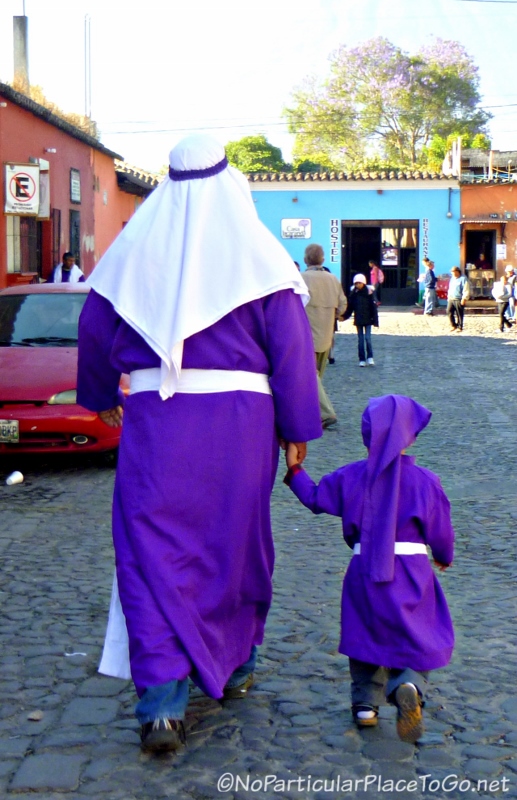