Terezin: If A Picture Paints A Thousand Words

It’s the children’s drawings that linger in our minds, haunting us long after our tour of the town of Terezin that once served as a concentration camp. We’d seen some of the drawings years before at an exhibit at the Holocaust Memorial Museum in Washington DC and then at the Pinkas Synagogue in Prague. Pictures showing happier times with houses and gardens, holiday celebrations with family, children playing, flowers and trees.  Pictures showing darker times too: the day-to-day life in an impoverished ghetto, the faces of sickness and starvation, acts of savage cruelty and the endless transports by train of people arriving from elsewhere or departing for the camps. 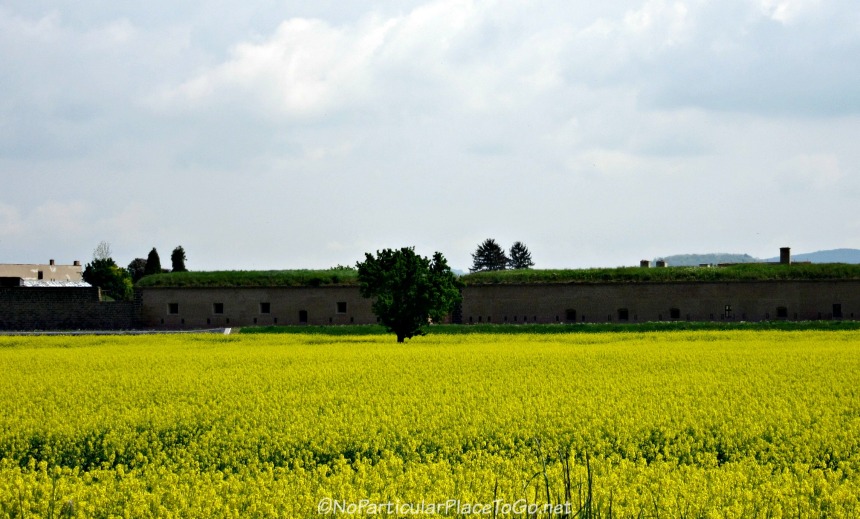 Field of canola with the Small Fortress in the background

Terezin, better known by its German name Theresienstadt, is a little over an hour’s drive north of Prague.  It was originally built as a fortress in the late 18th century by the Habsburg emperor, Joseph II, who named it after his mother, Empress Maria Theresa. (Incidentally, the Empress was also the mother of Marie Antoinette of the “Off with her head” fame.)  The fortress, divided into two parts, never served its military purpose as protection against Prussian attacks but instead proved useful as a prison for dangerous criminals, eventually evolving into a political prison for anyone (which numbered thousands) who the Austro-Hungarian authorities deemed a threat before and during the first World War. (Another interesting factoid is that this is the prison where the assassin of Archduke Ferdinand and his wife Sophie, whose murder set off WWI, was incarcerated.)

Following Germany’s invasion of Czechoslovakia in March of 1939, the garrison town of Terezin would also prove to be the perfect place for the Nazis who, in 1940, modified the political prison known as the “Small Fortress” into a police prison for the Gestapo to interrogate, torture and imprison its enemies. The town of Terezin itself, called the “Big Fortress,” met the Nazi requirements for a Jewish ghetto since it was surrounded by thick ramparts which would facilitate guarding of the prisoners. It was located about a mile-and-a-half from the Bohušovice nad Ohří railway station and had several barracks buildings.  Additional barracks were built by Jewish prisoners with triple-tiers of bunks constructed to make the most of available floor space in anticipation of the large populations (ranging from 35,000 to 60,000) who would be “concentrated” and crammed into the small town. The townsfolk of Terezin, numbering about 7,000, were evacuated and the ghetto opened for business. Between 1941 and 1945, Theresienstadt served as both a concentration camp for many prominent Czech Jews (musicians, writers, artists, poets and prominent intellectuals) and as an intermediate stopping place for other populations including communists, the Gypsies or Roma people, the educated and elite, homosexuals, Jehovah’s Witnesses and religious leaders.  Tens of thousands of Jews deported from Germany and Austria, as well as hundreds from the Netherlands and Denmark were in the transports into Theresienstadt.  All too soon, many of these prisoners would be outbound, selected for transport to Auschwitz and other death camps in the east. 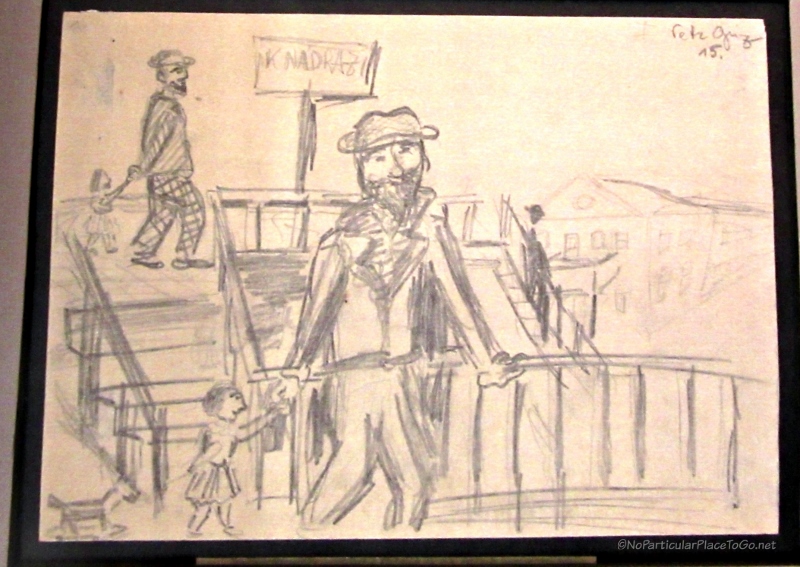 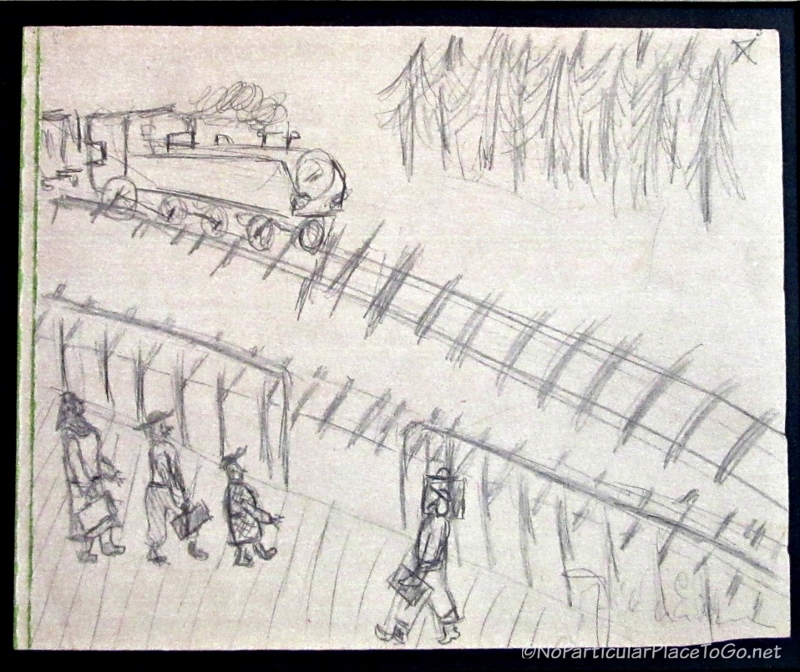 And yet, despite the abysmal conditions – severe overcrowding, inadequate sanitation, insufficient supplies of potable and even non-potable water, vermin (rats, fleas, flies and lice) starvation rations, illness, disease and death –  a semblance of life went on. In between the work details and selections for transport going to the death camps, noted musicians gathered themselves into orchestras and played concerts, poetry recitals were given, writers wrote, operas were performed, artists sketched and painted with whatever supplies they could find and clandestine classes were held to educate the children.

In December of 1942, Freidl Dicker-Brandeis (1898-1944), an Austrian Jew who lived in Czechoslovakia, arrived in the Theresienstadt Ghetto with her husband.  A talented artist, she had chosen to fill much of her limited luggage allowance of 50 kilos (about 110 pounds) with art supplies which she used to give surreptitious art lessons to over 600 children in Theresienstadt between 1943 and 1944.  Serving as a reminder of a world outside the camp, the lessons also provided a sort of therapy to help the children deal with the harsh reality of life in the ghetto and the constant fear and uncertainty that surrounded them.  Freidl Dicker-Brandeis encouraged her students sign each of their works with their names and ages and collected the pictures from her pupils after each class. Over the two years that she worked with the children, she assembled a collection of almost 4500 drawings, watercolors and collages. Before she and 60 of her students were deported in the autumn of 1944 to Auschwitz-Birkenau, two suitcases filled with these pictures were carefully hidden in one of the children’s dormitories. The drawings were recovered after the war and have served as a reminder of the names and lives lost that might have otherwise been forgotten.  An important part of Prague’s Jewish museum collection since the war’s end, the pictures have been exhibited around the world.

Almost from the beginning of Theresienstadt’s existence, the Nazi’s had maintained the fiction that the ghetto was a place for resettlement, a haven of safety for the Jews of Czechoslovakia (and later, other countries) and a model city of great culture with its high proportion of musicians, writers, artists and prominent leaders.  No one really cared to follow up on their story until a group of 466 Danish Jews (we wrote about them here) were transported to Theresienstadt on October 5, 1943.  Soon after their arrival, both the Danish and the Swedish Red Cross Organizations began asking questions about their whereabouts as well as their treatment and living conditions.  In a move of astounding audacity, the Nazis decided that they would invite the Red Cross to the camp and prove to the world that the Jews were being treated humanely by their benefactors. A huge cover-up ensued to hide all outward signs of the ghetto’s true circumstances: deplorable sanitary conditions teeming with vermin and pests, widespread disease and rampant starvation. Seven thousand, five hundred of the ghetto’s sickest population along with all of the orphans were deported east to the death camps to reduce the severe overcrowding. A predetermined route for the June 1944, visit was decided upon and buildings were spruced up with paint, flower boxes and curtains while the grounds along the way received more flowers, grass and benches.  Shop windows were filled with foods and goods and an elaborate play unfolded with bakers baking bread, a load of fresh vegetables being delivered and people singing. Prisoners were nicely dressed, cued with pre-rehearsed praise for the camp and carefully placed along the route to present a picture of a charming village filled with happy people.  Musicians played music in the background and the Red Cross fell for the ruse, never deviating from the route nor probing too deeply.  In an ironic twist, the Nazi’s liked their elaborately staged hoax so much that they produced a propaganda film called, “The Führer Gives a City to the Jews.”  After the film was completed, the director and most of the cast of prisoners were shipped to Auschwitz.

Terezin was a way station for almost 150,000 people from Czechoslovakia, Germany, Austria, the Netherlands, Denmark and Hungary to the extermination camps of Sobibor, Majdanek, Treblinka, Bergen-Belsen and Auschwitz-Birkenau, to name a few. And, while it wasn’t a death camp by the usual definition, approximately 35,000 people died there between 1942 and 1945 from exposure, starvation, disease, torture and executions.  Fifteen thousand children under the age of fifteen passed through the Terezin Concentration Camp.  Only 132 of those children were known to have survived. 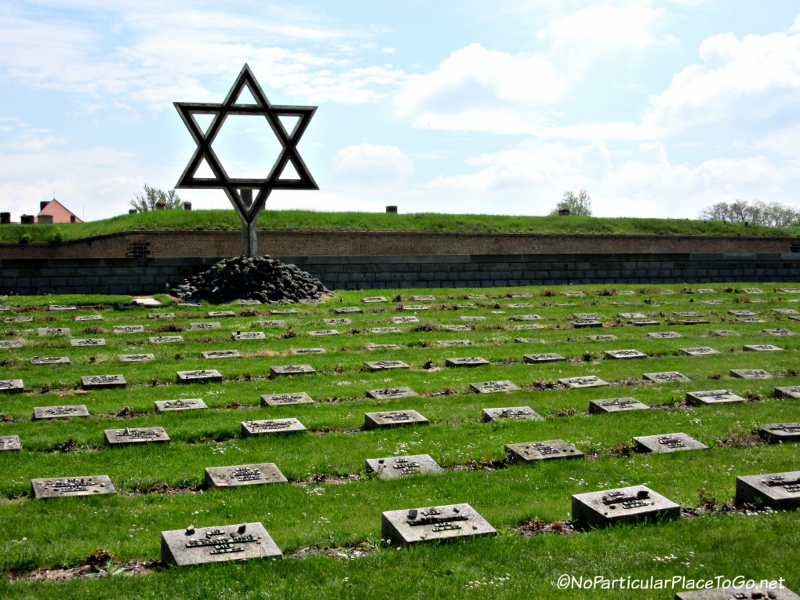 It’s not easy to visit a place like Terezin, nor is it fun.  And yet, we believe that visits to places like Terezin are necessary and that we owe it to ourselves to learn what hatred based on religion, race, political beliefs and sexual orientation can become.  We need to take those lessons and draw parallels to what we see around us today.  We owe it to the victims to honor their memories and never forget.