Rainbows and Stars: The Corn Islands

There are two ways to get to Islas Del Maiz or the Corn Islands (known as Big and Little) which sit off the eastern coast of Nicaragua in the Caribbean. You can take a bus from Managua to Rama (about 6 hours), a panga (boat) to Bluefields (about 2 hours) and then, either stay a night or two there in that less-than-thriving metropolis or hope to time the arrival to catch the twice weekly ferry (a 5 hour trip) to Big Corn Island.  Or you can take one of the twice daily flights by La Costena Air from Managua to Big Corn Island. The direct flight is just over an hour and is reasonably priced at $175 round trip. We opted, for the first time, to discard our by land only, budget-traveler philosophy and flew to the islands. 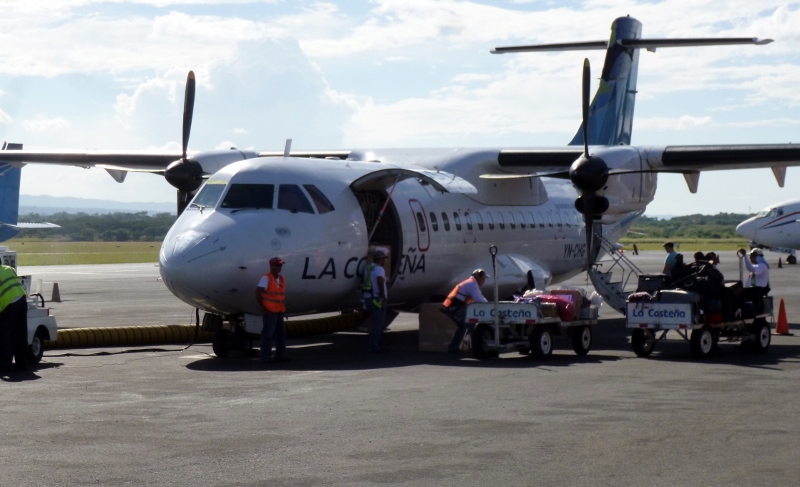 A rainstorm had just passed and, upon our arrival at the very small island airport, we stepped out onto the dirt (mud) parking area.  The dense, moist air enveloped us, rain drops sparkling upon the leaves.  In the distance was a perfect whole rainbow stretched from end to end, an uplifting and auspicious beginning for our month long stay on Corn Island.

Two or three taxis were lined up and a very large man with a friendly smile and outstretched hand introduced himself in a lilting Caribbean accent as Puma.  It was a pleasure to listen to him as he drove and spoke about the island in a deep-toned, melodious voice with the words flowing around us; some in English and the rest in a barely decipherable island creole.  He deposited us at our roof-top apartment called the Crow’s Nest which had screened and shuttered windows overlooking an empty and pristine golden sand beach with one row of foamy breaking waves and the turquoise water stretching to the horizon.

Darkness arrives about 5:30 at this time of the year in Nicaragua so we moved quickly. After meeting the owners of our apartment, we dumped our one suitcase and backpacks and hurried to a little store for a few staples for breakfast.

Then we set off in search of dinner, walking in the dark down the dirt road with flashlights pointing ahead trying to avoid the large mud puddles.  We arrived at the Island Style Beach Bar and Restaurant which sits next to the beach, empty except for one other couple, with classic old-style country and western music reverberating from the speakers.  Our meal of chicken, homemade plantain chips and coleslaw arrived on island time; the meal good and the setting tranquil.  That is until an apparition appeared halfway through our dinner emerging from the shadows of the jungle behind the restaurant, a machete dangling from his hand. He ambled in, sat down a few tables from us, ordered a beer and listened to the country western music for a bit before dozing off.

We walked back down the dirt road in the velvety darkness talking softly and laughing over the thought of a man walking into a restaurant in the U.S. carrying a machete.  On the left was the sea with the sound of the waves filling the night.  We turned off our small flashlights for several minutes, standing in the middle of the muddy road, turning slowly. . and saying “oh” ….  our faces upturned in wonder like children, gazing at the stars that filled the night sky.