Cartagena de Indias: Before, During and After The Conquistadors

Posted on December 27, 2014 by Anita and Richard @ No Particular Place To Go 36 comments

Cartagena de Indias, Colombia is a jewel of a city sprawled on the Caribbean coast with a fascinating history that, like a trilogy, can be divided into life before the Spaniards, life with the Spaniards and life after the Spaniards.

Life before the invasion and land grab by the Spanish appears to have been rather idyllic in many respects for the original Meso-Americans drawn to this area as early as 4000 BCE by the mild climate and profusion of wildlife.  Here they built villages and engaged in a life as hunter-gatherers as well as some uniquely sophisticated irrigation and farming practices. Some agriculturalists had a belief system that viewed the world as a weaving of land, plants and water upon which the animals and people lived.  Potters made both everyday and ceremonial ceramics and goldsmiths (the Sinú people) devised several methods for making some pretty awesome jewelry for those in the upper echelons of their society. Of course, the elite of all the tribes engaged in some strutting to make sure that everyone knew they had riches.  Also practiced was intermittent warfare, with some tribes indulging in the art of barbecuing their adversaries. But by and large, life was good. 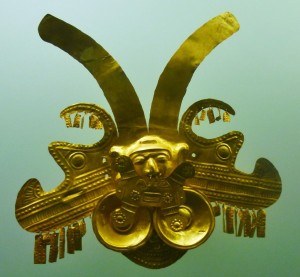 In 1501 CE, when the Spanish first landed in Cartagena Bay, the land was inhabited by several different tribes of people from the Karib (also spelled Carib) language group, who were found throughout the islands of the Caribbean Sea. The Spanish found the southern Caribbean coast around Cartagena unattractive to colonizers and departed elsewhere, leaving the Karibs in peace for another three decades. 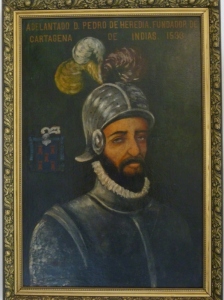 When the Spanish returned in 1533, there were 200 settlers led by Pedro de Heredia and the Sinú people were forcibly displaced or enslaved while their ancestors’ tombs were looted for gold.   After their plundering was complete, many of the Spanish inhabitants scattered to the countryside to begin new lives as farmers. However, Cartagena was given a second opportunity to prosper a short time later when the city was successfully established as one of the great royal treasure repositories for the riches stripped from the peoples of Latin America.  As a renowned and flourishing outpost it became a major trading port for precious metals, pearls and emeralds. Gold, silver and emeralds from the mines in New Granada (later to be named Colombia) and Peru as well as pearls from the coastal waters were loaded onto the galleons bound for Spain via Havana.

With its fame and glory the now prosperous Cartagena was turned into an attractive plunder site for pirates and buccaneers – French and English privateers – licensed by their respective kings.  Now it became the turn of the Spanish to be threatened, then attacked; their cities and forts sacked and pillaged and their people killed. The pirates quickly closed on the victim with a strike in 1563 by the French nobleman Jean-François Roberval followed quickly by Martin Coat for the British crown.  Cartagena’s defenses were repaired and strengthened after each incident but the work proved to be ineffectual.  In 1586 Sir Francis Drake arrived with a massive fleet, quickly took the city and exacted a stiff ransom from the Governor after destroying a quarter to the city. (See also our posts featuring Sir Francis Drake having his wily way in Panama at Fuerte San Lorenzo and Casco Viejo, the original capital of Panama.) 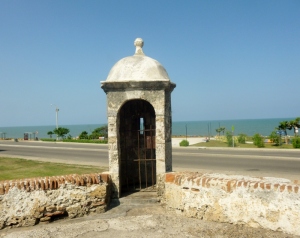 After this disaster, Spain poured millions every year into the city for its protection.  Planning of the walls and forts began in earnest during the 17th century; the Spanish Crown paid for the services of prominent European military engineers to construct fortresses.  The last successful incursion on Cartagena was in 1697 by the French pirates Sir Bernard Desjean and Jean Baptiste Ducasse but by 1710 the walls were rebuilt, the forts reorganized and restored,  the public services restored and the buildings reopened.

Today the walls that surround Cartagena’s old town are its most significant, identifiable feature and a part of what makes the city a UNESCO World Heritage Site.  The engineering works took 208 years and ended with some 6.8 miles of walls surrounding the city, including the fort, Castillo San Felipe de Barajas, named in honor of Spain’s King Philip IV. The Castillo was constructed to repel land attacks and was an anchor of the city’s defenses. Numerous attempts to storm the reinforced fort were mounted, but it was never penetrated.

Spain had one more infamous chapter to play in Cartagena’s history for, in addition to its prominence as a shipping port for the dispersion of the New World’s wealth to the Old World it, along with Veracruz, Mexico, became one of two licensed trade ports for African slaves in Central and South America. The first slaves were transported by Pedro de Heredia, who you may recall was the founder of the city in 1533, and were used as cane cutters to open roads, as laborers to loot and destroy the tombs of the aboriginal population of Sinú and to construct buildings and fortresses.  Slavery was abolished in Colombia in 1851.

Colombia made several attempts to declare its independence from Spain and was finally successful in the final war for independence in 1821 led by Simon Bolívar.  It is the admixture of three races, the indigenous Meso-American Karibs, the Caucasian Spanish and the descendants of the African slaves, which gives Cartagena an ethnic richness. Several people have told us that those from Cartagena think of themselves first as citizens of this city because of its distinctive kaleidoscope of civilizations, heritage and history  and then as citizens of Colombia.